Desserts from the Famous Loveless Cafe 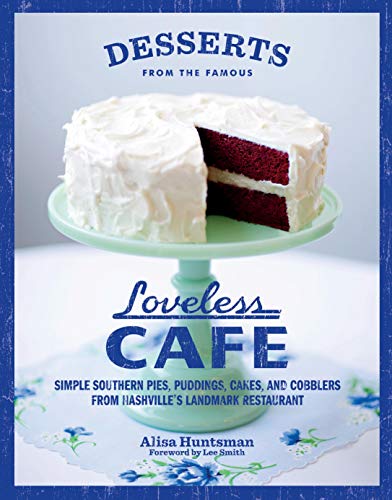 First things first: There are biscuits in this book. They are not the biscuits that made the Loveless Café famous. Sorry, Loveless lovers.

So the secret may still be safe, but Desserts from the Famous Loveless Café does serve up a hefty helping of many of the café’s most popular recipes.

Pastry chef and author Alisa Huntsman notes that the Loveless, which traces its roots in Nashville to 1951, started out so small and busy that dessert wasn’t even on the menu—why encourage diners to linger over coffee and pie? Customers were plenty happy at first to get the fried chicken and biscuits that the café built its reputation on.

But with her desserts, Ms. Huntsman rounded out the menu—after, she says, she figured out just how sticky the Southern sweet tooth really is. And many of her recipes prove it: There’s no shortage of sugar, honey, corn syrup, and sorghum in these pages.

The book covers the standards—pies, cakes, cobblers, cookies, puddings—and many of the recipes are quite standard: blackberry pie, buttermilk pie, chess pie, apple cake, apple crisp, snickerdoodles, lemon squares, chocolate pudding. In some, interesting touches pop up: cardamom (an underused spice in American kitchens) in the apple crumb pie and a blackberry/raspberry crisp, rose water in the blackberry pie and raspberry pie.

Some variations on the standards would make useful additions to a baker’s repertoire, such as the brownie bread pudding (not tested for this review). Made with day-old brownies instead of stale bread, this rich pudding gets a topping of bourbon-infused caramel sauce, a perfect riff on a standard. (One quibble: The recipe calls for a 7-by-11-inch baking pan, but the accompanying photo shows individual puddings baked in ramekins. Presumably the recipe, which serves eight, would fill eight ramekins—why not say so?)

Many recipes seem aimed at fairly novice cooks who may be short on time; the miniature lemon meringue pies, for example, call for store-bought crusts (a disappointment—is this really what the café uses?), and notes that cooks who don’t want to juice six lemons should use frozen lemon juice instead—a trick many bakers know but would be hesitant to admit.

Some other shortcuts or traditional recipe tweaks may seem like heresy, and sometimes unnecessary; preparing banana pudding with ladyfingers instead of vanilla wafers may, as the recipe says, make it more sophisticated—but “sophisticated” and “banana pudding” don’t seem right in the same sentence. The ladyfingers, while not bad, didn’t improve the pudding. But, other than being a little light on the vanilla, the recipe doesn’t go too wrong—how could it: with a custard of 3 cups of whole milk and 8 egg yolks, plus a topping of sweetened heavy cream?

Ms. Huntsman notes in the introduction that her early attempts at desserts for the café were routinely met with “not sweet enough,” and these desserts show how she had to keep upping the sugar to meet customers’ expectations. Lemon squares, for example, are a solid rendition (with the interesting addition of an egg yolk for a slightly sturdier crust) that may not be tart enough for non-Southerners.

The “Muddy Fudge Pie” follows suit with brown sugar and a cup of corn syrup; this creamy, baked pie, served with a chocolate sauce and whipped cream, was pleasantly tooth-achingly sweet. This was tested with Huntsman’s “Easy-as-Pie Dough,” which contains butter, confectioners’ sugar, and two egg yolks. That combination provides a sturdy, tasty crust, but bakers should keep a close eye on it, because the high sugar content easily leads to an overly browned rim.

Two recipes that included peanut butter were a bit less successful. A baked peanut butter pie, unlike the common chilled versions using cream cheese and cream, comes together quickly in a chocolate cookie crust. Like the book’s peanut butter brownies, the pie’s flavor was surprisingly muted. The brownie recipe worked fine, but with peanut butter and 2 ¼ sticks of butter for a 9-by-13-inch pan, produced bars that were greasy and didn’t hit hard enough with either the chocolate or peanut butter flavors.

In another test, black bottom cupcakes were tasty enough, but the proportions were off. Made with a simple cake batter topped with a dollop of cream cheese batter, this recipe needed about twice as much cake batter as it produced to use up the cream cheese portion.

A cherry coffeecake, on the other hand, offered a solid blend of cherries (though some bakers may wish to use more than called for) and a cream cheese filling. Although the recipe refers to pouring a batter into the pan for the base, it actually makes a stiff dough that produces a tart-like crust, perfect with a cup of tea and quickly polished off by tasters.

Other promising recipes (not tested) frequently turn to the greatest hits of spring and summer fruit. They include an open-face “out-of-the-pan” peach pie flavored with pumpkin pie spice; strawberry rhubarb pie with orange zest, apple pie spice, and cinnamon; blackberry jam cake with coconut caramel glaze; pear cobbler topped with brown sugar scones; a blueberry and peach buckle made with cornbread; blueberry shortcakes made with lemon curd and oat scones; a variety of pound cakes; and lemon tunnel Bundt cake with a cream cheese filling.

Homestyle recipes, generally simple to make, rarely running more than a page: A sweet gift for those who love the Loveless, as well as the rest of us—even if we never get to Nashville.