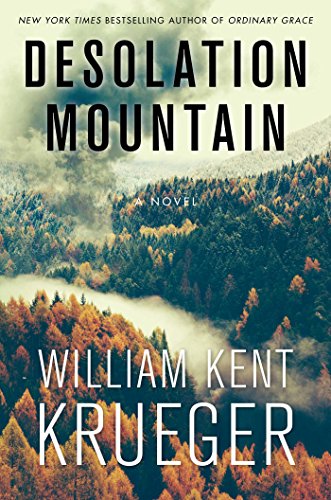 The generally accepted wisdom in fiction, particularly in novels involving action and crime, is to keep turning the screws on the main characters, tighter and tighter, until the reader can’t imagine how they’re ever going to get out. The suspense leading to the characters’ triumphs or failures is what keeps us turning pages.

William Kent Krueger has adhered to this model throughout his Cork O’Connor series. Cork has survived 16 previous crushings and emerged battered and changed, but he retains the moral and spiritual strength that have earned him many a loyal reader.

In Desolation Mountain, this former cop turned investigator again goes through the meat grinder, this time with a lot of company. Not only are all his family and friends involved, but also the full alphabet soup of government agencies.

The local politics of Aurora, Minnesota, a small community in the northern boundary waters region where Cork lives, merge with national politics around a mining scheme that will improve the economy, destroy the environment, and serve the arms industry. Just before a critical town meeting, a beloved senator scheduled to speak against the project, is killed in a plane crash near Desolation Mountain. Cork suspects the crash has been engineered, especially after some of the first responders disappear after searching the debris.

Thus begins an onion style of plot—each layer peeled away exposes another layer, accompanied by a strong smell. That stink is a psychic one, sensed by both the Anglos and the Anishinaabe in the community. Cork himself is a halfbreed, Irish and Ojibwe, and his son Stephen has inherited the Native American sensitivity common to healers. He is a student of Cork’s mentor, century-old Henry Meloux, who cryptically guides both men through the shadows into the light as they chase down the stink.

The federal agencies emit most of the odor. Different groups are playing different games, known and unknown to each other, shutting down local attempts at investigation and often bullying the citizens. Someone is going so far as to kidnap and harm select people, killing their dogs during the snatch. Once the pattern comes clear, Cork realizes his own family is in jeopardy.

The story is presented through multiple viewpoints, rotating among Cork, Stephen, and Bo, one of Cork’s trusted buddies reprised from an earlier book. The Stephen element slows down the plot sometimes, even though he’s integral to it because of his dream-vision that launches the book and ties all the layers together.

At 20, Stephen is still recovering from past violence, and his struggles with responsibility and patience cause him at intervals to relapse into youthful brashness. That introduces problems into an already problematic case, and sometimes feels contrived. But Stephen’s issues can’t be removed from the story, because the O’Connor family is deeply influenced by their mixed heritage and need to factor it into their decisions, relationships, and actions. Stephen resembles his father, whose “Anishinaabe heritage might not show on his face, but it shaped his conscience.”

The result is a juggling act in which Cork is always involved to some degree, providing his own moral subplot. Even if other, more official people are running the show (or one of the sideshows), he emerges as a leader and, without being superheroic, manages to close the case for the benefit of the good guys, getting rid of the bad.

One can’t discuss this series without mentioning its sense of place. The physical environment is as much a character as the humans who inhabit it. Indeed, each volume of the series is named for the place central to the action. In this book, Desolation Mountain is where the story begins and ends, and revolves around.

The underpinning of place ties mixed races and cultures together into a believable whole that’s characteristic of Krueger’s work, and feels real to readers visiting this world. Here’s hoping the author can keep it going for many more volumes.