Design Is How It Works: How the Smartest Companies Turn Products into Icons 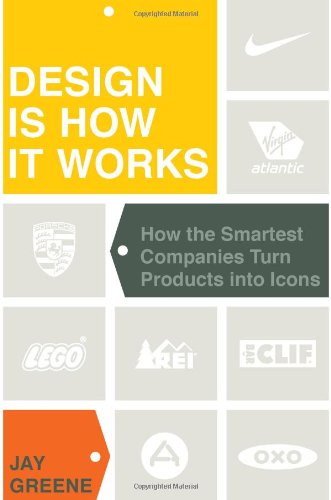 Jay Greene’s book takes its name from a famous quote by Steven Jobs who said that the iPod’s design is “not just what it looks like and feels like. Design is how it works.” While one might expect Apple to feature prominently in this book, it’s actually only really discussed in the introduction, with the balance of Design focused on case studies of eight companies that adhere to Jobs’ philosophy, whether they consciously realize it or not.

Moreover, these eight case studies have both the usual suspects—such as Porsche, OXO, and Nike—as well as some you might not expect to make it to Greene’s short list: such as Cliff Bar, REI, and LEGO. With each case study, the author lays out his argument that these companies are successful because they each address a personal need for the company’s individuals. By doing this, the companies, in turn, create an experience that their customers also value. Porsche, for example, focuses on the driving experience, while OXO focuses on the shortcomings of such mundane products like spatulas and vegetable peelers. Yet along the way, they pick up not only design awards but also rabidly faithful customers.

The idea, Greene repeats throughout his book, is for a company to cater to its own needs via excellent design and through that address the “unspoken desires” of its customers. In that way, design becomes an integral part of how a product works, rather than an afterthought to make something look pretty.

Therein lies the deeper meaning of Jobs’ quote and Greene’s title: that, at its core, design is about creating desire because something works exceptionally well, such as OXO’s staple remover; or responds to a particular need, such as REI’s Quarter Dome Tent; or is just plain cool, like LEGO’s robot kit, Mindstorms NXT. It’s noteworthy to mention that all of the aforementioned are best sellers in their categories. And they’re best sellers exactly because they address the itch that the companies themselves felt needed a scratch: the staple remover that didn’t rip paper, the tent that could withstand 25-mile per hour winds, the toy that could teach about something as esoteric as robots.

Greene manages to weave these common elements through his eight case studies. Still, he acknowledges that some—ACE Hotels in particular—may be so cutting edge with regards to design as to be potentially too forward-thinking, much like former technology innovator Bang & Olufsen, which Greene discusses in his introduction.

What the author does not do, for better or for worse, is delve into particulars as to how each company achieves its design goal. In that sense, Design is, at best, an introduction regarding the intersection of design and business. However, Greene handles it well and those that want to know more about how companies incorporate design into the fiber of their businesses would do well to begin here.

Reviewer Logan Lo is a small business consultant under the guise of an intellectual property attorney and a certified general real estate appraiser. He is currently an associate at the commercial litigation firm Woods & Lonergan in their Intellectual Property and Real Estate Practices.