The Deserter: A Novel 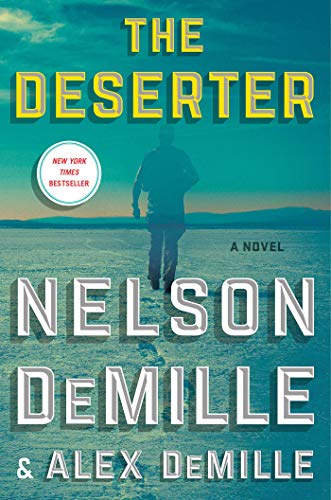 “If you like your thrillers fast-paced, intelligent, tough and good to the last drop, The Deserter is right up your alley. An unrelenting edge-of-your-seat ride from America’s foremost storyteller, and son.”

Captain Kyle Mercer of the Army’s elite Delta Force has disappeared, perhaps walked off from his post in Afghanistan. According to his teammates, Mercer must have left sometime after midnight, taking all his field gear with him including night vision goggles and an M4 rifle.

However, a baffling mystery surrounds his disappearance, because no one actually saw him leave the outpost, and no one noticed he was missing until fist light. The big question is: Has the unthinkable and unpardonable happened and he simply deserted his post? Or is the worst-case scenario closer to the truth: He’s been abducted by the enemy?

Mercer is a soldier’s soldier, the elite of the elite, with a fine and distinguished military career thus far. He is also a trained and deadly assassin. Because of the vast amount of classified information he has stored in his military brain, his commanders are obviously nervous in case he has fallen into the hands of enemy combatants, knowing they will torture him for that information:

“Whatever Mercer’s team’s mission was, is was too critical to send his teammates out on patrols to find their missing comrade. Instead, patrols from a Stryker brigade operating in the area were deployed as soon as Mercer was reported missing, and helicopters and spotter aircraft joined in the search.”

The searching is futile, and to make matters worse, during the frantic search, two soldiers are killed by the enemy in separate incidents, one by ambush and one by a roadside IED (improvised explosive device). If Mercer did desert, as well as cowardice he now has the blood of fellow soldiers on his hands.

However, three months after Mercer’s disappearance, the Taliban releases a video of Mercer kneeling in the dirt in front of five Taliban fighters, obviously captured by them. He does not look too healthy with sunken cheeks, hollow eyes, and a scraggly beard. He has obviously been tortured. They leave a mocking statement on the video:

Then things get really strange. really strange. Shortly after the Taliban’s propaganda video, another video emerges. However, this one is in total contrast to the first. It shows a man with a knife carrying the head of a Taliban fighter. Not too far from his feet, another five headless bodies, probably all Taliban.

Is this Mercer, somehow turning the tables on his captures, vengeance achieved? Or just simply another propaganda video made to confuse and unsettle?

When Mercer is allegedly spotted two years later in Caracas, Venezuela, the alleged murder capital of the world, by an old army buddy, top military brass order maverick Scott Brodie and Maggie Taylor of the Criminal Investigation Division to fly to Venezuela and bring Mercer back to America—dead or alive. For Brodie, dead is better than alive. Less troublesome.

However, Brodie knows this is going to be a difficult and extremely dangerous mission, made more difficult by his new partner’s inexperience and by his suspicion that Maggie Taylor is reporting to the CIA behind his back. What secrets is she hiding from him, and why? And is Captain Kyle Mercer really the dastardly villain he’s being made out to be?

The Deserter, by father and son team, Nelson and Alex DeMille, is a classic military thriller. The two main characters, Brodie and Taylor, make a great team, and no doubt will be in other up-coming DeMille books. However, the villain, Captain Kyle Mercer steals the show. Think Colonel Walter E. Kurtz from Apocalypse Now on steroids and cocaine washed down with whiskey, and you get a slight inkling of what he’s capable of.

Nelson DeMille’s legendary dark humor is peppered on every page, making you laugh out loud, even when you know you shouldn’t. If you like your thrillers fast-paced, intelligent, tough and good to the last drop, The Deserter is right up your alley. An unrelenting edge-of-your-seat ride from America’s foremost storyteller, and son.