The Department of Rare Books and Special Collections: A Novel 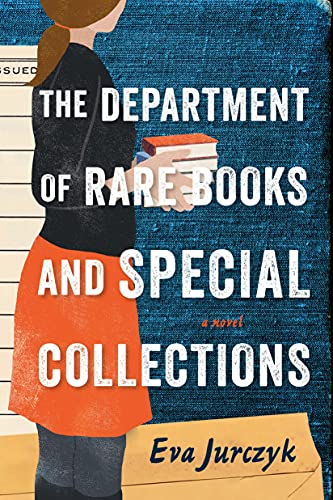 “. . . a keeper that could easily end up in someone's private special collection.”

It's Liesl Weiss's first day on the job, put there unexpectedly after Christopher Wolfe, the head of the rare books department of a large university, suffers a stroke. Her first day is the same day university president Lawrence Garber and the department's wealthy donors are due to arrive for a viewing of the recently purchased rarest of rare books, the Plantin Polyglot Bible.

". . . There were rumblings that the university's rivals in Boston wanted it and the British Library wanted it, but when the day came, neither had bid, and Christopher had easily won the auction . . ."

Donors are anxious to see the prized addition partially paid for with donor money. It's locked in Chrisopher's safe until it can be appraised for insurance, but he's neglected to share the lock combination with anyone in the department.

Liesl is frantic. She wants to call off the donor meeting, but Garber objects. She wants to be honest with the donors and tell them it was safely locked in the safe, but he objects to that, too, saying: "These are major donors. They don't want to feel informed. They want to feel important. They need to be the first to see it."

Liesl finds herself continually undermined by others in the department. Before Christopher's stroke, she was his assistant performing strictly administrative duties, one of those lower level jobs no department could function without. Typing, filing, mailing, answering the phone—efficiently keeping the day-to-day business of the library going.

Now, thrust into a management position, she's met with passive aggressive resistance by powerful egos in the department, some who feel the job should be theirs. Dan Haberer, inflexible, committed, and dedicated to the previous boss, argues or refuses to do what she asks, and would no doubt be fired on the spot if he weren't the union representative for library workers.

Liesl stands her ground and makes her first executive decision. Substitute the Plantin Bible with the Peshawar, a different, but equally precious book for donors to view. It, too, is ancient, rarely seen, and cost a bundle.

"The Peshawar was an international treasure, a clue to the development of modern mathematics. . . ."

This decision, too, is met with opposition, but in the end, she gets her way, and the donor meeting goes better than expected.

The next day she discovers that Christopher's wife, Marie, has the combination to the safe, but Liesl's relief is shattered when the door is opened and the Plantin Bible is not there. She wants to call the police to report the theft, but is stonewalled on that decision as well.

The Department of Rare Books and Special Collections, by far the catchiest book title of the year, is written for book lovers who will no doubt dive in and devour it just like real a bookworm. Eva Jurczyk provides a behind the curtains look at the rare book community, insightfully examining the makeup of the bibliophiles who populate it.

The classic bibliophile is described as one who loves, admires, and collects books, not only for the content of their text, but for the method and quality of the binding. When that love affair is carried to an obsessive compulsive extreme with the fervor of an impassioned stalker, they are called bibliomaniacs, a term that could adequately describe some of the characters populating the book. Like characters who have grandchildren named Robespierre. Like characters who research the origin of the zero.

It's a literary read as befitting its theme, a little talky, a bit slow moving, a few long, tight paragraphs, but ultimately informative, readable, and enjoyable, a keeper that could easily end up in someone's private special collection.

There is a real Plantin Polyglot Bible, a Renaissance Bible printed in five languages between 1568 and 1573 for King Philip II of Spain. One of 13 copies including the typefaces which were designed for it is on display at the Plantin-Moretus Museum, the site of the original printing press.

There's a video on YouTube of the copy housed in Christie's being handled by an archivist turning the vellum pages with ungloved hands. Interestingly, modern practice for the handling and preservation of rare books now requires clean, dry hands rather than gloves.