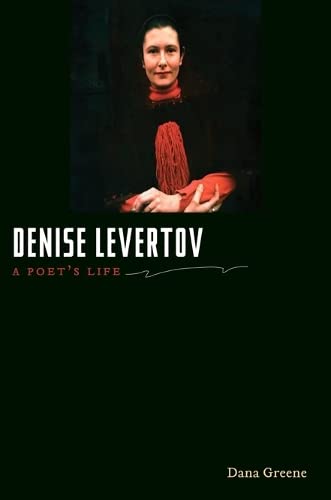 “Denise Levertov emerges as a person and a poet. . . . an authoritative and intimate biography.”

Denise Levertov was all of the above as well of one of America’s finest and most prolific contemporary poets. Ms. Greene has done us all a service with this much awaited and essential portrait of a major figure in American literature.

The book was no easy task, as the poet often wrote and spoke about her abhorrence of biographers who play on gossip, asking instead that any biographer center her subject on the author’s or artist’s work.

The other challenge was that Ms. Greene, who had never met Levertov, had to base her personal portrait on interviews and writings with the author’s family, colleagues, lovers, and fellow poets, as well as Levertov’s self-revealing poetry and autobiographical writings. She does a remarkable job here of delicately delving into the author’s psyche and tumultuous life as well as following her spiritual questing while managing to center it all through a penetrating analysis of the writing.

Denise Levertov emerges as a person and a poet. Daughter and sister, wife and mother, lover and friend, fellow poet and teacher—she comes alive here in all of her triumphs and struggles due largely to Ms. Greene’s research and writing skills but also to the detailed Levertov archives housed mainly at Stanford University where Levertov taught in her final years.

Though the book is woefully short on photographs—10 to cover 74 years of life—we do get vivid personal descriptions of her such as this from her later years in Seattle:

“Neighbors, friends, colleagues, students, fellow poets, and artists all came to her home where they were greeted with exuberance, shared in her bursts of full-bodied laughter, and were sent off with her signature Buddhist bow. Her gift in friendship was to share her endless curiosity and delight in the world. A rapid intake of her breath and a clasp of her hands were her signature responses.”

So who were the key figures in her life? Certainly her Welsh-born mother Beatrice Spooner-Jones, a descendent of Welsh mystic Angell Jones, and her Russian-born father Feivel (Paul) Levertoff, a descendent of legendary rabbi Schneour Zalman. Her father was actually a personally aloof religious writer who moved from his Jewish and Hebrew-speaking background into a Jewish-Christian faith, ultimately becoming a priest in the Church of England. All of this religious and spiritual background would come into play throughout Denise’s life, even as she and her older sister Olga sought to escape from it as youths while living in Ilford, England.

Ms. Greene does a brilliant job of identifying this lifelong spiritual quest of Levertov as a central movement of her life, and connects these deep personal ties to family to the poems, thus revealing the life through the work and the work through the life.

Following her young adult rebellion in England and Paris, Levertov met the American expatriate writer Mitch Goodman in Germany, and the two married and soon came to America in 1948 where they lived uneasily in Greenwich Village. Ms. Greene early on identifies “a central theme of her life, the conjoining of fears and promises, joy and sorrow.”

Levertov had already begun to publish poetry in England (The Double Image, 1946) and was encouraged by American poet Kenneth Rexroth, who would include her in his The New British Poets anthology of 1949. She had met the young American publisher James Laughlin in Paris, who would publish most of her books.

Ms. Greene clearly identifies Levertov’s declared poetic influences in Ranier Maria Rilke, William Carlos Williams, and Robert Duncan, whom Levertov referred to as her “master” for almost a decade in one of her deepest poetic yet personally turbulent relationships.

She would soon meet Williams and befriend Muriel Rukeyser who would become close personal advisors. Her collected letters with Williams (New Directions, 1996) and with Duncan (Stanford Univ. Press, 2003) serve as a source here. She also had an on and off friendship with younger poets Adrienne Rich and later Lucille Clifton. As we learn, many of her closest ties were with young admirers, particularly with a few young men whom she would at times accept as allies and lovers.

As Ms. Greene makes clear, another central current in Levertov’s life was her paradoxical longing for personal intimacy and community despite her willful individualism.

While she and husband Goodman remain supportive and caring for decades, theirs was an open and often unsatisfying marriage. She and her one son, Nikolai, born in 1949, struggled with their relationship throughout her life. She also sought to reconnect with her mother and father. Ultimately she found herself in the classroom and before admiring crowds. She felt at home, as at the her first reading at the San Francisco Poetry Center in 1958: “She was a natural for such an event in that she had presence, was an excellent public reader, and as a woman poet, was a unique phenomenon. Her intensity, seriousness of purpose, and urgency were coupled with a joyfulness, and her lovely modulated voice with its slight foreign accent, made her alluring to her American audience.”

Though the chapters are clearly marked covering delineated periods of Levertov’s life, at times Ms. Greene struggles with maintaining the details of chronology. Her flashing backward and forward is often confusing and annoying, as are some of the needless summarizing at the close of each chapter. Despite its 60 pages of “Notes” and “Selected Bibliography,” this does not read like a dissertation, but rather an authoritative and intimate biography.

The author is most brilliant in connecting the poems themselves with the life story. Her close and contextualized analyses are revealing and insightful on both personal and poetic levels. Ms. Greene charts and verifies the progressive development of Levertov as poet including her political writing and activism period. Her close analysis is particularly revealing in the latter sections of the book where Levertov comes to her Christian faith and her writing becomes most “meditative and sensuous.”

As she moves through Levertov’s last works, book by book we follow a path toward her acceptance of herself and her spiritual faith, even her death, concluding, “Poetry was not only her craft but the means by which she gave life to herself and to others.”

Ultimately Ms. Greene creates exactly the kind of biography that Levertov would have wanted—and we so needed.