Demonic: How the Liberal Mob Is Endangering America 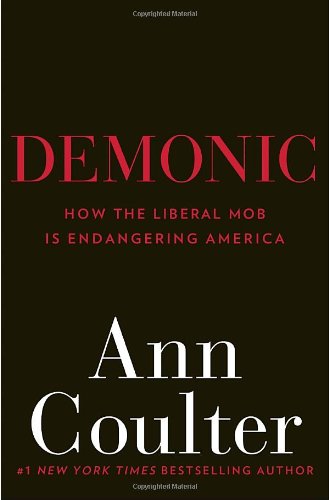 “Various committed Tea Party and conservatives questioned are not at all interested in reading Ms. Coulter’s newest work. Others—whether liberal or conservative, Republican or Democrat—ought to take note and stay far away from the garbage that is Demonic.”

There are times when a reviewer’s integrity is truly challenged, whether by conviction, beliefs, politics preconceived notions of the book, or hostility to the subject or writer. So when the challenge of reviewing Ann Coulter’s new book was introduced, I took it on with pleasure.

Demonic is Ms. Coulter’s eighth book, all seemingly having the same theme: liberals and Democrats are unholy, heathenistic, and ruled by propaganda evildoers who have ultimate control the “mob mentality.” They are to blame for all human frailties. Ms. Coulter writes in an odd mix of politics, religion and bullying. Like so many others of this genre, liberal and conservative alike, Ms. Coulter’s newest is a rehash of her older books. The only differences are that a) she seems to be getting more fixated on the religious aspect of her rants, b) she has a new theory to work with, and c) is screaming louder.

How loud? The book needed to be put down every 10 pages or so because I was getting tired of being yelled at as a reader, and her “volume” does not diminish in this 368-page diatribe.

Ms. Coulter seems to be very concerned about the liberals and Democrats using “mob behavior” to manipulate the voters into “worshiping” dead liberal leaders such as “FDR, JFK, RFK, MLK, LBJ, and O.J.” while asking, “When was the last time you heard a conservative get weepy about RWR?” In fact, it was about two days before this review was written and the words came from Speaker of the House, John Boehner. He also spoke of Lincoln.

Proofs of the liberal propaganda and mob generating machine are predominately formulated from Ms. Coulter’s reading of two studies of large group behavior. The first is Blood of Revolution: From the Reign of Terror to the Rise of Khomeini by Erik Durschmied. This is an excellent study of political power grabs through the use of propaganda to incite large group behavior to a “mob mentality.”

The second is Gustave LeBon’s highly praised 1895 work, The Crowd: A Study of the Popular Mind, which was reissued by Dover Press in 2002. This is the study of large crowd behavior and the role of these groups, ranging from peaceful to violent mobs, in political movements. LeBon “presents crowd behavior as a problem of science and power, a natural phenomenon with practical implications.” LeBon does not speak to any specific political movement or party, yet Ms. Coulter strongly suggests, “Our liberals could have been Le Bon’s [sic] study subjects.”

Her thesis statement is clear. “The Democratic Party is the party of the mob, irrespective of what the mob represents. Democrats activate mobs, depend on mobs, coddle mobs, publicize and celebrate mobs—they are the mob.”

Here is where Coulter’s book fails the “smell” test, starting with the first chapter, “The Liberal Mob.”

The opening pages make statements, carefully skirting libel issues, strongly suggesting that LeBon’s study places liberals into the same category as Hitler and Mussolini, and that liberals and the Democratic Party are somehow responsible for the mob activities of the 1992 Los Angeles riots, the 1968 Democratic National Convention riots, the anti-immigration law marches across the country, the attacks delegates and destruction of property during the Republican National Convention (which is not identified by location or date), and the “throngs of Islamic fanatics attending the Ayatollah Ruhollah Khomeini’s funeral . . .” These claims have no factual evidence nor support—except on conspiracy websites and Ms. Coulter’s own website.

There is the usually name calling, defining liberals and Democrats as consisting of the “least-informed, weakest minded members of the public” including “soccer moms, actresses, felons, MSNBC viewers, aging Red-diaper babies (children of liberal communists), welfare recipients, heads-up-their-asses billionaires, and government workers – who can never be laid off.” Wow. The breadth of Ms. Coulter’s attack is impressive. She continues her characteristic attacks with equally outrageous claims. Like other extremist political pundits, she ignores history and her own political movement, focusing on the opposition party as evil and in league with the Devil (Chapter 17). This can be most clearly seen if one reads the section and chapter titles. “The violent tendencies of the liberal.” “Imaginary violence from the Right v. actual violence from the left.” And my personal favorite, “Raped twice: Liberals and the Central Park Rape.”

What did pass the smell test? Her opening quote from Mark 5 2:9 (NIV), though she does not tell the entire story—only what suits her for this book.

Demonic is a book for true believer in the Liberal Conspiracy Theory, extreme conservatives, and others who must blame those who are different for the failures of all, including themselves. It represents political extremism, pettiness, and the best use of misleading and emotionally based arguments (read propaganda).

There is nothing new in these pages, except Ms. Coulter’s newly found fascination with large group behavior, including violent mob characteristics. She is louder, more outrageous, and more helter-skelter with her accusations than in the past. She duly ignores the misdeeds and actions of conservatives, Republicans, and her “following” in the extent of her arguments.

Various committed Tea Party and conservatives questioned are not at all interested in reading Ms. Coulter’s newest work. Others—whether liberal or conservative, Republican or Democrat—ought to take note and stay far away from the garbage that is Demonic.