Demon Fish: Travels Through the Hidden World of Sharks 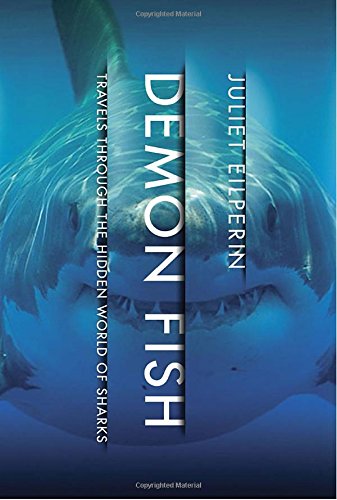 “Ms. Eilperin regales us with the facts with all the smoothness of a skilled storyteller. . . . exploring humanity’s complex relationship with a mysterious animal that, over the centuries, has been cast as everything from a god to a guardian spirit, to an edible resource, to a ravenous assassin.”

Most people don’t much like sharks. Chances are when you think of them, you hear the Jaws theme in your head. You may remember scenes from some documentary: sleek, single-minded beasts snapping and whipping through a blood-clouded water in a feeding frenzy.

The images are universal and universally chilling. But they only show one side of a creature that science is revealing as much more complex, and much more interesting, than we ever suspected.

Sharks are some of the most ancient animals on our planet, the first ones appearing about 200 million years earlier than the dinosaurs. They evolved from bony fish during the Devonian age, about 400 million years ago, and they live in oceans around the globe. Considering their ubiquity, and the fact that they’ve been around far, far longer than we have, it’s actually pretty surprising that we know so little about them. Ms. Eilperin hopes to change that.

Humans haven’t always regarded sharks as dire enemies—and in some places, they still don’t. To early peoples who made their living on the seas, sharks were even-handed gods and spirits. Fijian boaters called to the shark god Dakuwaqa. In Japan, the shark was a physical manifestation of the God of Storms. Panama’s Tio Tiburon—“Uncle Shark”—and the powerful guardian angel-like “aumãkura” of the Hawaiians, demonstrate how sharks were part of everyday life for many peoples.

But according to Ms. Eilperin, the shark-god business isn’t what it used to be. The most famous of the hereditary shark callers of New Ireland, a province in Papua, New Guinea, is also one of the last. Fewer people demand shark meat for traditional funeral rites and other special occasions. But even as sharks grow less important to local culture around the Pacific, they loom larger in Western imaginations.

Although Greek and Phoenician seafarers recorded the hazards of sharks, Ms. Eilperin reveals that medieval Europe actually seemed to forget about them. But Western exploration and expansion renewed acquaintance with the ancient predators. By the 19th century, lawyers and reporters became “sharks”; the word was an insult denoting every negative connotation.

Their public image worsened with a series of highly publicized shark attacks along the Jersey shore in July 1916. And the fate of that image certainly seemed sealed, if unintentionally, when a novel by Peter Benchley and a fake shark named Bruce joined in 1974 to create the first summer blockbuster film, Jaws.

But Ms. Eilperin shows that dire image is far from true. Statistics that insist shark attacks are increasing each year fail to take into account the fact that more and more people are going to the shore each year. Most sharks travel alone, and most shark attacks are accidental. Sharks prefer seals and sea lions. That’s why sharks only bite once and then drop human swimmers. We’re not nutritious enough—or tasty enough—to bother eating.

In fact, as with most animals these days, they have far more to fear from us than we do from them. Climate change and its affect on preyfish populations, sport fishing, and the popularity of shark cartilage for medicines and shark fins in Asian cuisine, are all factors in the shrinking of shark populations. Fortunately science, and our own innate curiosity, may be the best hope for shark survival. Because the scariest thing about sharks, in truth, is how little we really know about them.

Ms. Eilperin regales us with the facts with all the smoothness of a skilled storyteller. Reproduction? Well, shark sex is brutal, and many females wind up carrying embryos fertilized by multiple partners, at several stages of development. Fortunately, in isolated conditions, most female sharks can reproduce via parthenogenesis—no male needed.

Sharks also hold the prize for species diversity, with amazing variations in breeding, lifestyle, and habitat. Some lay eggs; others give birth to fully developed live young. Some even produce extra eggs specifically to feed growing embryos--”embryonic cannibalism.” Sharks live in every ocean around the globe, and radio tracking is only now starting to reveal how and where they roam.

Humans don’t much like sharks—but Ms. Eilperin’s book should change that. Her writing is quick-paced and entertaining, a mix of science and investigative reporting that engages as much as it informs, exploring humanity’s complex relationship with a mysterious animal that, over the centuries, has been cast as everything from a god to a guardian spirit, to an edible resource, to a ravenous assassin.