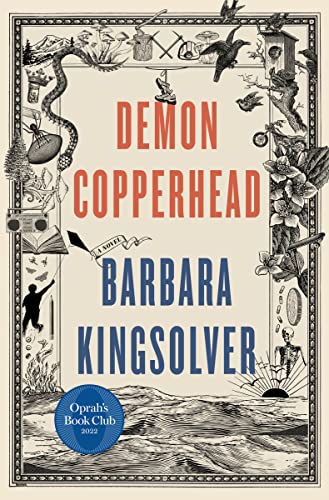 In echoing Dickens, Barbara Kingsolver has written a social justice novel all her own, one only she could write, for our time and for the ages.

Master storyteller Kingsolver has given the world a book that will have a ripple effect through the generations. She's employed Dickens' classic David Copperfield, his tale of a woeful orphan, as framework, but her literary saga Demon Copperhead is unique to our times. It's tragic that the social ills Dickens addressed in the Victorian era still exist today.

The author takes on teen pregnancy and foster care, child abuse and child labor, and big oxy and fentanyl to tell the coming-of-age-too-soon story of one young abandoned white male whose family, friends, and enemies call Demon Copperhead. The name empowers him, even though Demon doesn’t realize how much he matters.

As soon as he’s born, his future seems sealed. Yet it’s not what happens to Demon that makes him but how he handles it all as he becomes his single mother’s caregiver, then is cast out into foster care after she dies.

The reader follows him through betrayals in love and friendship, down shadowy alleyways of danger, despair, and death, as he searches for identity and home. Seeing the world through Demon’s wide-open eyes and ironic, self-effacing voice may open our own.

Demon on the term hillbilly: “Hillbilly is a word everybody knows. Except they don’t. . . . The world is not at all short on this type of thing, it turns out. All down the years, words have been flowing like pieces of shit, only to get stuck on a truck bumper with up-yours pride. Rednecks, moonshiners, ridge runners, hicks. Deplorables.”

Demon on child labor: “August they call the dog days, due to animals losing their minds in the heat. But the real dog days if you are a kid on a farm are in September and October. Tobacco work: succoring, topping, cutting, hanging, stripping. . . . I’d only ever known childish things, screwing around in the woods or Gameboy. Now I would be one of the working kids.”

He does find a few people who feebly try to assist him, some more helpful like The Peggots and Miss Betsy and Mr. Dick. Most are like the preacher who picks him up hitchhiking and talks a well-intentioned game of empathy but then dumps Demon at a place he’s robbed. Demon’s life seems temporarily "fixed" as a star shining underneath the Friday Night Lights of football culture, until another tragedy comes along, a result of another so-called helper using him instead, and the true decline begins:

“Pain can scramble you. If it is weather, it can be a storm tearing off the roof of your mind. . . .

“But it’s not stupid that makes a bird fly, or a grasshopper rub his knees together and sing. It’s nature. A junkie catches his flight. . . . You can think you’re in charge. . . . till the clock winds down and the human person you were gets yanked out through whatever hole the devil can find. Learn your lesson, get your feet up under you. You will be knocked down again.”

Like all stories that stick with you, this one is both universal and decidedly personal. If you’ve lived near the Appalachians, you'll recognize these characters as well as their voice. They may even remind you of family members—those who’ve made it through, made it out, or made it back. If you haven’t, it will touch your heart anyway.

Demon’s story makes it obvious that not much has changed for many white families who emigrated from the U.K. in the 19th century looking for a better life and settling in the U.S. Appalachian Mountains. Many still receive the same exploitation and disregard as they did before they crossed the pond, generations later. It's just that now, Gameboys and Big Pharma are part of the equation.

Though reading David Copperfield isn’t necessary to understand this novel, the sea figures largely as a symbol in both, and characters such as Mr. Dick with his kites still exist to keep Demon’s hope afloat as the boy longs for the sea but often can’t even find a cool drink of clean water. Somehow the protagonist survives the watery grave his daddy didn’t, but he’s left to pick up the pieces and endure the calamity others inflict. Will he live up to his labels or surpass them?

As Demon Copperhead balances on each precipice, the author’s superb foreshadowing helps anticipate the next dip in the road, corkscrew turn, or horrific grasp for love, always reminding the reader that it’s children who are trying to hold the light in an otherwise hopeless void.

This isn't always a pretty book to read any more than drugs and poverty are pretty, but it's sprinkled with a creative boy's sarcastic southwestern Virginia humor and the beauty of the mountains. Do not let the length of this novel dissuade you. It’s needed for the breadth of the message and the vivid rendering of the story. There may be passages in which you don’t know when you are, but you always know where you are—because Demon never wanders far from the land that calls him back.

These characters represent real people, good people, solid as oaks but indefatigable if provoked. That Kingsolver has shone a light on them as only she can, is a leap in understanding the hurting of a forgotten, often misunderstood and ridiculed people. Next time you see such a person, be kind, open your mind, and stop making fun of their accent.

As Demon says, “it’s not over until the last page.” Let’s hope he finds that ocean view he’s looked for all his life, and may his past inform our future.