Democratic Justice: Felix Frankfurter, the Supreme Court, and the Making of the Liberal Establishment 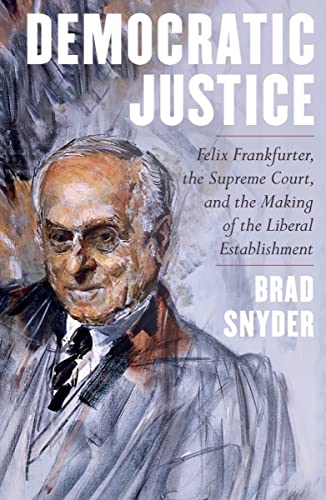 “Deeply researched and written with authority, Snyder’s book examines virtually every aspect of Frankfurter’s career and, despite its length, remains wonderfully readable and accessible.”

“There is no one on the Supreme Court today quite like Felix Frankfurter,” writes Brad Snyder.

At 992 pages, his superb biography Democratic Justice, is an engrossing reminder that Frankfurter (1882–1965), a remarkable Austrian Jewish immigrant, was a self-styled “fighter for truth” whose dedication to critical thinking and passion for public service helped shaped many aspects of the American 20th century.

In his years as an associate justice (1939–1962), he became the Court’s most outspoken advocate of judicial restraint—a view in short supply on today’s Supreme Court, which has been criticized for overreaching decisions on abortion and other issues.

“Frankfurter knew it was a mistake to expect the courts to solve all the nation’s problems,” says Snyder, a professor of constitutional law at Georgetown University. “Government by judiciary eroded the need for the American people to invest in the democratic political process.” That process—not court decisions—should produce change in America, he insisted.

Specialists will be especially interested in reading about Frankfurter’s years on the Court and his relationships with other justices. An erstwhile liberal lawyer, he has often been accused by scholars of becoming a conservative justice. In fact, argues Snyder, this thoughtful descendant of generations of rabbis was a champion of democracy.

Most general readers will be fascinated by Frankfurter’s essential strengths as a man of character and integrity who used his “gift for friendship, eye for talent, and passion for public service to create the liberal establishment.”

A graduate of City College of New York and Harvard Law School, the charismatic Frankfurter taught for many years at Harvard Law, creating a wide web of bright friends and former students and colleagues whom he would admonish to bring their expertise into public service. As a close unofficial advisor to President Franklin Roosevelt, he helped staff the New Deal.

He dedicated his life to “building bridges between the academy and government,” writes Snyder.

The informal group discussed government, policy, and other topics, eventually becoming proponents of the liberal belief that government can improve citizens’ lives without abridging liberties and rights. (Author Snyder wrote about the group in his earlier The House of Truth: A Washington Political Salon and the Foundations of American Liberalism.)

Among other things, the salon debated the innocence of Sacco and Vanzetti, two Italian immigrant anarchists sentenced to death on robbery and murder charges, the dangers of Communism, and such matters as the minimum wage and child-welfare laws.

In those pre-Supreme Court years, Frankfurter helped plan and contributed to The New Republic and co-founded the American Civil Liberties Union, where he led many free-speech battles (and won the ire of FBI director J. Edgar Hoover, who allegedly called Frankfurter “the most dangerous man in the United States”).

In the 1920s, he took private and public parts in the fight to save convicted murderers Sacco and Vanzetti. He found fault with the prosecution’s case and the judge’s handling of the trial. Snyder devotes a full chapter to the case, in which Frankfurter argued for a new (and fair) trial.

At age 56, when nominated by Roosevelt to the Supreme Court, Frankfurter faced a humiliating Senate confirmation hearing reflecting the rising anti-Communism, anti-Semitism, and anti-New Deal sentiments of the late 1930s, writes Snyder. Of the witnesses against him, Frankfurter said, “All were fanatical and some were very definitely mental cases.”

Witnesses included Elizabeth Dilling, a suburban Chicago housewife and devout Catholic devoted to stamping out Communism in America. “Her testimony overshadowed the rest of the day’s witnesses, most of whom varied from paranoid to prejudiced,” writes the author.

Deeply researched and written with authority, Snyder’s book examines virtually every aspect of Frankfurter’s career and, despite its length, remains wonderfully readable and accessible. With an eye for telling details, he brings to life Frankfurter’s participation in the controversies of his time, including his opposition to the “hysteria” over Communists infiltrating the federal government and what he regarded as the “most disturbing” case of Julius and Ethel Rosenberg, who were convicted and executed for espionage.

He did not think the Rosenbergs innocent, but was troubled by the Supreme Court’s handling of their case.

In the late 1950s, concerned that New York Times reporters assigned to the Supreme Court lacked legal training, he arranged for the paper’s new Court correspondent, Anthony Lewis, then 29, to spend a fellowship year as a Harvard Law student. He urged former students, clerks, and friends on the faculty to mentor the reporter. Lewis went on to an exemplary career as a legal correspondent.

“Historians have not been kind to Justice Frankfurter,” Snyder writes in conclusion. “They have characterized him as a liberal lawyer turned conservative justice, as a judicial failure, and as the Warren Court’s principal villain.”

He goes on: “But as the Court has become increasingly interventionist, scholars have begun to reassess the role of the Court in our democracy and Frankfurter’s incremental approach to judging, respect for precedent, and invocation of the political question doctrine [the idea that an issue is so politically charged that federal courts, typically viewed as the apolitical branch of government, should not hear the issue] as a safeguard against government by judiciary.”

A monumental account of a life in public service, Democratic Justice is welcome reading for our troubled time.