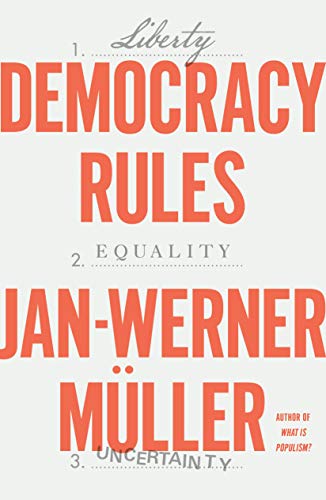 “In light of recent political upheavals around the globe, it is clear that democracy is an ongoing and open project that is subject to challenge and direct assault.”

Political norms are constantly shifting; sometimes they flip altogether. Democracies can transform into autocracies. No political form is inherently stable or timeless. Democracy Rules contends that we should not only understand and debate about the nature of democratic governance, but also actively participate in its defense. For while democracies have their flaws, the alternative is a far more harrowing prospect.

Democracy mattered to the Founders of the American Constitution. Within the Constitution, there is a strong sense of individualism and individual rights. However, there is an equally strong counterbalance that recognized that we are part of a collective project within which we not only have individual rights, but also duties and obligations beyond us. A large republic could work only if it had strong central institutions that would stop an inevitable devolution into factional fragmentation.

Modern democracy as a concept and practice has a short history. We can trace it back to the U.S. constitution in the New World. In the Old World, the French Revolution (1789–1799) is often seen as an early, though failed, experiment. Indeed, in the 1830s Alexis de Tocqueville wrote admiringly of the American system’s emphasis on equality and liberty. He wondered if that political form could ever be successfully translated into a European counterpart.

In light of recent political upheavals around the globe, it is clear that democracy is an ongoing and open project that is subject to challenge and direct assault. In the Americas an authoritarian turn is well underway in Nicaragua, Brazil, and Venezuela. In Europe we need look no further than Hungary, Poland, and a number of Eastern European countries. And we should not forget Turkey or India.

Mṻller begins by telling us what democracy is not—populist authoritarianism. He first notes that for all the authoritarian claims to represent “the people,” the key is how “the people” is narrowly defined to the exclusion of any identity not deemed to be “us.”

Second, he astutely notes that civil society and its institutions are attacked and undermined: elections that are lost are frauds; unfavorable news coverage is “fake news”; and legitimate protests are not by “the people” (but rather Antifa, Black Lives Matter, communists, socialists, or some other specter aimed to instill fear).

Importantly, and ironically, he thirdly notes that populist authoritarianism could not gain power without the backing of elites, which then leads to all manner of corruption and self-interested dealings. Thus, a nativist identity politics gets wedded with crony capitalism and the fetishization of entrepreneurship in the formation of oligarchic structures.

Fascism, often conflated with authoritarianism, is contrasted by Mṻller as a mobilization of state apparatus to undertake the systematic oppression (or worse) of minority populations. This is certainly an arguable point and one open to challenge. He does note that there is “racial (and religious) animus that has been legitimated from the very top in Hungary, Brazil, and the United States.” Given the surge in and weaponization of Christian-ethno-nationalism in the US and elsewhere, one is left to wonder what the threshold is in Mṻller’s balance sheet that would render the conclusion that an authoritarian movement has become fascist.

Populist authoritarianism often takes on the guise of false democracy. Aside from the irony in this, the deceit of false democracy will figure into Mṻller’s hopefulness about the future of democratic governance.

Mṻller then moves into a discussion of actual democracy as founded on the basic tenets of equality (political and social), freedom, and liberty. These are infused with rights, but also duties and obligations; the latter is something that seems to be lost on the pandemic, anti-mask crowd.

Mṻller astutely underscores how democracy is an inherently unstable political form with—yes—winners and losers. That authoritarians attempt to undermine the electoral process and undermine the vote with claims of fraud when things don’t go their way is a clear anti-democratic maneuver. Those false claims are then amplified many-fold on social media with its rhizomatic algorithms. If you hear a lie ten times, that’s one thing. If you hear it a thousand times, that’s altogether another.

In the end, Democracy Rules envisions three key rays of hope. First, Mṻller argues that while people around the globe may have frustrations with their democracies, they do not reject them outright. Second, democracy is so appealing a political process that autocrats seek to fake it, and that hypocrisy does suggest the lack of appeal of unvarnished authoritarianism. Third, the kind of tribal-binary-polarizing politics created by authoritarians is not some inevitable result of some kind of political evolutionary staging or human genetic hardwiring.

One wishes to be as hopeful as Mṻller. Anthropologist F. G. Bailey would remind us that the politics of leadership always involves a certain amount of deceit—front stage efforts appear to play by the rules and embrace core values, while backstage rules are bent, cultural norms are transgressed in the pursuit political goals. We are in an unprecedented time across the globe where these transgressive efforts are so clearly on the front stage, quite blatantly, for all to see.

It’s equally distressing that so many followers are willing to embrace the shattering of basic political rules and norms. It suggests that a highly active, vocal minority in the US and elsewhere is perfectly willing to take the authoritarian path as long as it aligns ideologically with them. That is truly frightening.

While we might debate some of Mṻller’s positions on democracy, the book is a critical read for anyone interested in what’s happening in contemporary US and global politics. He masterfully breaks down complicated ideas through clear and elegant prose. He also has the gift of being able to take abstract ideas and flesh them out with real-world examples from across the world. This is no dry academic monograph. Rather it is a short, dynamic, and accessible exegesis on democracy intended for a broad audience concerned about the political future.