Democracy in America?: What Has Gone Wrong and What We Can Do About It 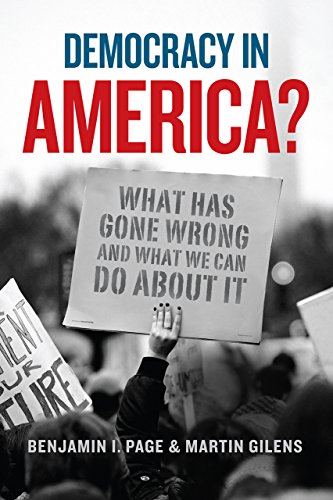 “brilliant, indispensable, and highly accessible . . . examination of the inner undemocratic workings of a U.S. political system that is regularly and incorrectly held up as an unmatched model of popular self-rule.”

Americans are regularly told that they live in a great majoritarian democracy. The reality of American political life is very different. As the distinguished political scientists Benjamin Page (Northwestern) and Marin Gilens (Princeton) show in their important new volume Democracy in America?

“the best evidence indicates that the wishes of ordinary Americans actually have had little or no impact on the making of federal government policy. Wealthy individuals and organized interest groups—especially business corporations—have had much more political clout. When they are taken into account, it becomes apparent that the general public has been virtually powerless . . . The will of majorities is often thwarted by the affluent and the well-organized, who block popular policy proposals and enact special favors for themselves . . . Majorities of Americans favor . . . programs to help provide jobs, increase wages, help the unemployed, provide universal medical insurance, ensure decent retirement pensions, and pay for such programs with progressive taxes. Most Americans also want to cut ‘corporate welfare.’ Yet the wealthy, business groups, and structural gridlock have mostly blocked such new policies [and programs] (emphasis added).”

Mammon reigns in the United States, where “government policy . . . reflects the wishes of those with money, not the wishes of the millions of ordinary citizens who turn out every two years to choose among the preapproved, money-vetted candidates for federal office” (emphasis added).

Thanks to this “oligarchy,” as Page and Gilens call it, the United States ranks at or near the bottom of the list of rich nations when it comes to key measures of social health: economic disparity, intergenerational social mobility, racial inequality, racial segregation, infant mortality, poverty, child poverty, life expectancy, violence, incarceration, depression, literacy/numeracy, and environmental sustainability and resilience.

Economic globalization and labor-displacing technology are part of what plagues the U.S., Page and Gilens note, but “all other advanced countries have faced [those] same pressures” and “nearly all of them have done much better than we have at” limiting inequality.” Those countries have used “a range of egalitarian public policies to spread the gains from trade and technology more widely, allowing many more of their citizens to benefit.” Plutocracy negates such policies in the U.S.

It’s a vicious circle. As Page and Gilens note, “When citizens are relatively equal [economically], politics has tended to fairly democratic. When a few individuals hold enormous amounts of wealth, democracy suffers.” Savage inequality and abject plutocracy are two sides of the same class-rule coin in New Gilded Age America, as in previous eras.

Some political scientists have argued that regular elections that generate competitive contests for citizens’ votes are all that is required for a nation to be a democracy. But “elections alone,” Page and Gilens note, “do not guarantee democracy.”

Democracy in America? shows that majority progressive public opinion is regularly trumped by a deadly complex of forces in the U.S. The list of interrelated and mutually reinforcing culprits they examine is extensive: the campaign finance, candidate-selection, lobbying, and policy agenda-setting power of wealthy individuals, corporations, and interest groups; the special primary election influence of extreme party activists; the disproportionately affluent, white, and older composition of the active (voting) electorate; the manipulation of voter turnout; the widespread dissemination of “distracting, confusing, misleading, and just plain false information;” unrepresentative political institutions (the Electoral College, the unelected Supreme Court, the over-representation of the predominantly white rural population in the U.S. Senate, and “one-party rule in the House of Representatives”); constitutional and related partisan government gridlock and the fragmentation of authority in government.

Page and Gilens break down the dismal, dollar-drenched democratic dysfunction of the American political system across four chapters that detail how wealth disparity combines with political and governmental gridlock to  thwart ordinary Americans’ progressive policy wishes (chapter 3); how the wealthy Few exercise wildly disproportionate influence on politics and policy as compared to the tiny clout of mass-based citizens’ groups (chapters 4 and 5); and how major party polarization and gridlock negate the people’s will at numerous “veto points” across the system (chapter 6).

The book’s next three chapters propose solutions, calling for critical political reforms and a “large-long-term social movement for Democracy.” Such a movement must pursue increased equality, since plutocracy grows atop extreme economic disparity like white on rice.

Page and Gilens leave out much that is central to the story of how the rich rule. They say nothing about the rise of a lethal and ubiquitous police, prison, and surveillance state inside the U.S. (The story of government repression of the Occupy Wall Street Movement, and of earlier left and anti-plutocratic movements is left out.)

The intimately related problem of the giant U.S. military state and global empire (great forms of upward wealth distribution and authoritarian power) is glaringly absent. The critical and ongoing historical roles of racial and ethnic division and “divide-and-rule” are barely touched upon. Also missing for the most part is the critical ideological and propagandistic, consent-manufacturing role of the corporate media and the depressing capture of the nation’s educational system by the corporate and financial “elite.”

Also deleted is the American workplace. As the radical economist Richard Wolff likes to remind us, ordinary working-class and working-age Americans spend most of their waking lives on the job, under the authoritarian and often despotic supervision of employers. Until its workers own, direct, and structure their own workplaces as “associated producers,” democratically determining the purpose and nature of their productive activities and appropriating the surplus generated for themselves and the broader common good, it is difficult to think of a society as meaningfully democratic.

Capitalism and democracy have long stood in fundamental opposition to one another—a problem that does not engage Page and Gilens.

Still, their new volume is a brilliant, indispensable, and highly accessible (suitable for a public as well as an academic audience) examination of the inner undemocratic workings of a U.S. political system that is regularly and incorrectly held up as an unmatched model of popular self-rule.