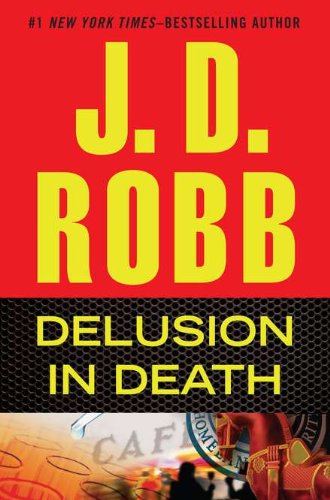 “. . . deadly serious with all plot, character development, and events revolving around Eve’s determination to put a twisted criminal mastermind out of action.”

In the 35th adventure of this futuristic romance/police procedural series with Lieutenant Eve Dallas and her husband Rourke, Ms. Robb cranks things up to the highest intensity yet.

First, the crime brings serial killing to terrorist level. From safely offsite the murderer uses creative chemistry to induce more than 80 happy-hour revelers to slaughter each other in 12 minutes. Then he moves to another site and triggers another group to go berserk . . .

In this case it adds up to 127 victims before she can chase down the killer.

How she does so showcases everything in her character, her background, and her marriage—and how they all come together to make Eve the best-qualified person to solve this heinous crime.

Delusion in Death is a more cerebral story than an action one in that it focuses on psychology. Through the drama of a manhunt, it explores the motivations and reactions of Eve, her loved ones, the killer, the victims, her staff, and even society.

Because of the huge number of bodies that must be processed—all to be given the same emotional and investigative importance—Eve must move beyond the data-crunching powers of computers in order to short-cut her way through information overload and find the pattern that will direct her to the sicko responsible for such cruelty and carnage.

She succeeds through a combination of intuition honed by experience on the force; deduction fueled by her personal history of dealing with power trippers, abusers, and woman-haters; and ever-increasing intimacy with Rourke. As well, she knows and trusts her team and unleashes them to work at maximum efficiency, all driven by loyalty and honor.

The characters interact with Ms. Robb’s signature snappy dialogue, making the year 2060 seem as close as today. Some exchanges bring laugh-out-loud relief before the serious business presses onward. As in the previous volumes, the metro New York setting and details of the era’s fashions and technology are logical and credible extensions of what we currently know.

Eve proves herself a supercop by how much information she can hold in her head and how quickly she can invent and revise strategies. It’s not quite so easy for the reader, who might get confused by the number of story elements or by characters too similarly named. Since one of those turns out to be the killer, this aspect interrupts page turning sometimes by causing one to back up to keep things straight.

The story never swings far from its focus on Eve’s work, however. Despite her passion for her husband, Eve remains foremost a cop, dedicated to obtaining justice for the dead.

“Murder could happen, she thought . . . to anyone, anywhere, anytime. She’d seen the worst of what people did to people over love, money, for power, for revenge. Or just because. But mass murder painted a darker canvas, and using victims as weapons made for a particularly twisted mind.”

This volume is deadly serious with all plot, character development, and events revolving around Eve’s determination to put that twisted, criminal mastermind out of action.