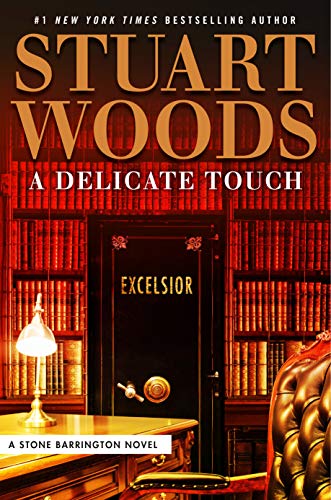 “Woods, a pro at keeping the plates spinning, creates a stellar performance of risk, intrigue, and hard-won escapes for his very experienced protagonist . . .”

Clearly, Stuart Woods never runs out of ideas. Among his more than 75 titles, the Stone Barrington books make up the largest share: A Delicate Touch looks like the 48th featuring this New Yorker and his circle of employees, friends, informants, and most importantly, police detective Dino Bacchetti. He’ll need all of them to protect his life as the contents of a hidden safe place him into direct conflict with the most powerful crime families of the region.

Dino’s ex-wife Mary Ann is the daughter of a reputed Mafia leader, Eduardo Bianchi; about to let go of her deceased father’s house to a museum, Mary Ann’s discovered a massive safe—and of course she doesn’t have the combination. Stone Barrington’s immediate assignment is to locate a safecracker to handle the pre-war German mechanism. Hence the need for “a delicate touch”: mess up the combination and the safe becomes even more impossible to ever open.

The safecracker recruited, Sol Fink, is one of the early delights of this entertaining mystery. About a century old, Sol’s the only person in America who can handle the challenge, and he’ll need to be “sprung” from the assisted living home in order to tackle it.

“His voice was strong, and he was ramrod straight in his posture. Stone hadn’t expected that.

“‘Before you ask,’ Sol said, ‘I’m a hundred and four years old . . . It’s not my fault,’ Sol replied, climbing into the rear seat. ‘I did everything that’s supposed to kill you, except smoking, so I should have been dead fifty years ago.’

“Stone got up front with Fred. ‘Then from now on, Sol,’ he said over his shoulder, ‘I will adopt you as my personal example.’”

Opening the safe places Stone and his crew in enormous danger. Written testimonies in it, probably once “insurance” to protect Bianchi from blackmail, reveal federal crimes committed by members of the notorious “Five Families” of the Italian mob of New York City and beyond. Stone’s happy to turn the records over to Dino and his police squad for investigation, but unfortunately the “owner” of the documents, Mary Ann, can’t resist talking about the contents to a descendant of one of those implicated—a man about to run for president, and whose past and present probably connect to a massive and deadly criminal enterprise.

Wisely, Stone gets out of town, with a few others at risk. But he’s got to return at some point, and nobody crosses Jack Thomas and his political dream boy Hank without violent consequences.

The plot’s clever and involves the owners and top journalists of the city’s premier newspaper. Woods, a pro at keeping the plates spinning, creates a stellar performance of risk, intrigue, and hard-won escapes for his very experienced protagonist, so the big question is, what will Stone have to trade to ensure his and his family’s long-term safety?

This is a classic “Mafia crime” mystery, told in a chatty and delightful way. Don’t count on memorable tropes or depth, as they are not the point of Woods’ efforts. But go ahead and bet on Stone Barrington to work things out. And if you’re going along for the ride, as Dino will be from time to time, be sure to bring a dinner jacket. Stone solves crimes in style.