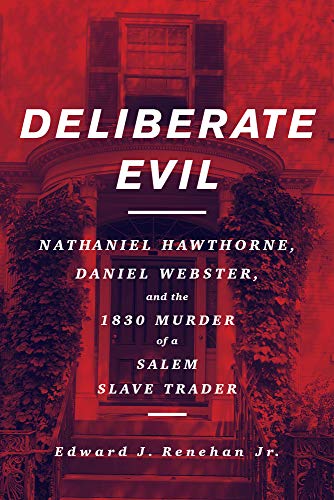 With some exceptions, such as the Lizzie Borden affair, sensational crime has a relatively short shelf life  in public memory. Consequently, such stories become common fodder in our golden age of research in the lost and forgotten pieces of American history that make for whopping good tales.

The April 6, 1830, murder of elderly Salem, Massachusetts “shipmaster, trader, and slaver Joseph White” serves as a prime example. In Deliberate Evil, Edward J. Renehan explains how one of America’s first true detective stories drew “national journalistic attention” but also went remembered by famed writer Nathaniel Hawthorne. A number of other famous people appear on the periphery of this history.

Yet, as often the case in such sensational true history, the White murder “utterly diabolical, devilish, ungodly, and unholy” “has largely, but not entirely gone unmapped for some 190 years.” Because of the prominence of the families involved and the connection to the slave trade, decisions were made over the years as to what “would be maintained or interpreted” about this crime.

This whodunnit had everything including “Captain White’s sordid history in the slave trade,” “several of the most prominent and prosperous families on the eastern seaboard,” antebellum New Orleans, and “the eloquent and brilliant Daniel Webster,” already a famed Massachusetts United States Senator. It even touched on Salem’s infamous witch trials of 1692.

The author makes the most of these multiple threads although sometimes in an order difficult to follow. Renehan writes with a clear writing style that keeps the mystery, not just telling the factual history, drawing the reader in.

Deliberate Evil does have moments in the narrative that are abrupt, such as when the narrative of the murder is laid aside in chapter three for a later relevant discussion of decline, warehouses, and wharfs. Later chapters similarly introduce Nathaniel Hawthorne and the two major families involved.

Not a sleepy New England village, Salem in April 1830 had the significant number of 14,000 people and prospered as the center for the China trade as well as in its commerce with the East Indies and other ports of the world. Its wharfs “represented Herculean efforts, staggering investments,” and engineering details necessary for “receiving and hosting the dozens of Salem vessels that came and went every day.”

This nautical boom town also had “taverns, gambling dens, and whore houses” to serve its large numbers of “longshoremen, sailors, and shipwrights.” The “cold blooded, calculated, and methodical” murder of Captain Joseph White sent Salem’s citizens into a panic but still “liquor flowed,” “dice rolled,” and “stolen goods were bartered and sold.”

This city had many facts not easily in evidence to the visitor. For example, Salem had a class of “highly entrepreneurial Black men.” It had also fallen on hard times from which it never recovered. Salem had to compete with the ports of Boston and New York made stronger every day by new railroads and canals. New England would challenge the world with its manufacturing but that would happen on the rivers in the interior.

Another “reason for the shrinking of Salem’s economic base was the loss of income from the slave trade.” Importation of enslaved Africans legally ended for the whole United States in 1808 and the need for this trade declined due to the numbers of the enslaved “growing naturally through new births.” By then it had made such men as Captain Joseph White immensely rich.

Rumors had a younger White encouraging his sailors to rape the women and even doing so himself in his youth. He publicly had a “blatant refusal to show the least bit of shame or contrition about his action.” His murder promised to end this other, aside from the Witch Trials, dark stain on Salem’s past but, for a time, it did just the opposite: “putting its slaving connection on full display.”

The events of White’s demise began on April 7, 1830, with an impoverished and drunken Benjamin White railing again about how much he despised his rich cousin and employer Captain Joseph White whom he claimed had various improper sexual liaisons. While doing his morning routine of preparing the captain‘s house for the day, Benjamin White found what at first appeared as a burglary but proved to be the savagely brutal murder of the 82-year-old Joseph White.

Stephen White, adopted son of and beneficiary of his uncle Joseph’s patronage, took charge of overseeing the investigation and eventual prosecution of the culprits.” Five years earlier, he had founded a local organization for the apprehension of the growing number thieves in the increasingly economically stressed Salem. The group’s name used the word “detection” in regard to crime for the first or one of the first times.

“Grudges against White, though many be secret, abounded in Salem.” Suspicions about his murderer fell on several people including Stephen White himself. Thus pioneer amateur detectives almost immediately eliminated Benjamin White and a young woman living in the household as suspects.

This tale has many familiar modern elements: rewards offered and false information given, a battle of lawyers, and verdicts still held in question. It could serve as useful reading for future crime scene investigators. Deliberate Evil has illustrations as well as annotation and a bibliography.