A Delayed Life: The True Story of the Librarian of Auschwitz 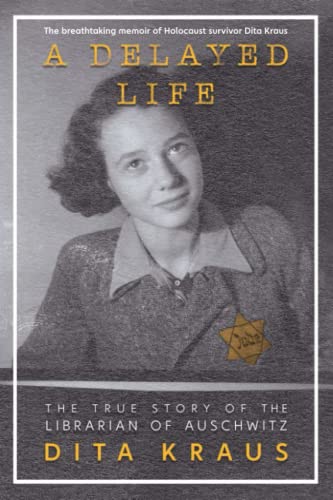 Dita Kraus tells her harrowing life story in A Delayed Life. She was 13 years old when her family was torn from their comfortable Prague home to Terezin. From there, they were sent to Auschwitz, where her father died. Dita and her mother survived and were selected as slave laborers in Hamburg, then finally to Bergen Belsen. After enduring years of starvation, disease, beatings, and inhumane treatment, Dita’s mother sees Bergen-Belsen liberated by the English only to die in the hospital shortly afterward.

It’s a grim story, but Dita recounts it all matter-of-factly, capturing her young point of view even though she wrote these pages as a woman in her nineties. Readers who expect a novelistic shaping of the narrative, as is done in the book based on her life, The Librarian of Auschwitz by Antonio Iturbe, may be disappointed. Dita may not write like a novelist, but she weaves a powerful, gut-wrenching story all the same. She is scrupulously honest, describing how her life narrowed during the start of the war, but as long as she had friends, it was still good. Even in Terezin, she could find things to uplift her, moments of human connection. Mostly, though, she focused on survival, keeping a spoon tucked away for safety, figuring out the best strategy to get some actual vegetables in the thin soup served up daily.

Things got worse after the transfer to Auschwitz. There Dita ‘s father died. “He just wasted away until he couldn’t get up from his bunk.” Intent on surviving, Dita and her mother clung on, trying desperately for some normalcy in the hellish conditions. For Dita this meant a job:

“I was fourteen and a half. Fredy Hirsch appointed me to be the librarian of the smallest library in the world. My role was to watch over the twelve or so books that constituted the library. The books were a random collection. On the ramp, thousands of Jews arrived daily. They were led away, but their luggage remained behind. A number of lucky prisoners had the task of sorting their contents. When they found a book, they would somehow get it to the Kinderblock.”

The children would go to the library in the morning, meeting for songs, stories, activities, a semblance of the lives they’d left behind. None of them survived Auschwitz. After the war, Dita discovered she was one of the youngest to come out of the camps alive. It’s a status she found deeply sickening. She describes the “selection,” when the notorious Dr. Mengele chose who would go to the gas chamber and who would be shipped out as slave labor:

“My mother, Liesl, and I were among those destined to live. Some fifteen hundred women were sent from Auschwitz to work in Hamburg, Christianstadt, and Stutthof. About seven thousand people, the old, the weak, and all the children who remained, were murdered in July 1944 in the gas chambers.”

The work is grueling, the living conditions crowded and filthy, but again, Dita savored every moment of kindness. One sentry recognized their last name—Dita’s grandfather was a famous politician, the leader of the Social Democratic party. When the guard learned they were related, he brought them some warm clothes and food.

“It raised our spirits tremendously. Not so much the gifts as the fact that in his eyes were now individuals.”

To be treated as person, not an animal, was an incredible gift and not one to be taken lightly.

For those who want more drama from Dita’s searing descriptions, she explains one of her most essential survival techniques:

“Again, as always, I find myself digressing, turning away from the sights I don’t want to remember, or rather, something in me, some defense mechanism, diverts my thoughts to other channels. Every time I start speaking of the Holocaust, I seem to be drifting to those postwar experiences. Although they are directly connected to our suffering, they are still peripheral, as if I could relate only to the edges, but not the wound itself.”

“You who read this must be asking yourself: How is it possible to live through such horrors and not become insane? It is. Nature, it seems, has a way to protect man even from the ultimate of hells. I felt no sorrow, no pity. I felt nothing at all. I understood what I saw was horrible beyond human understanding, but I felt no emotion . . . I existed on the biological level only, devoid of any humanity.”

Except, of course, she still cared deeply about her friend Margit and her mother. Emotions weren’t dead, just “encased in some frozen place inside of me.”

When the British liberated the camp, there was no immediate relief, joy, or freedom, just the slowly growing awareness that the nightmare was finally over. Dita worked as a translator for the British, using her poor English and excellent German for interrogations of the once-brutal guards. She was keenly aware of how her position had changed, that the guards were now afraid of her, that they were the ones about to be sent to prison while she could walk around freely. But she still felt compassion for the one guard who was kinder than the rest. Can one forgive one’s tormentors? Even in hell, Dita says, there are gradations of demons.

The liberation felt hollow after Dita’s mother died. Now she was truly alone. Still a teenager, she had no idea where to go or what to do with her new freedom. The second half of the book describes a life no longer delayed, one where she made choices and looked for a new family, a new home. Back in Prague, she was reunited with her grandmother, who also somehow survived the Holocaust, and soon ran into a fellow prisoner at Auschwitz, Otto Kraus.

She and Otto recognized each other from the Kinderblock where Otto worked as a teacher while she ran the library. They understood each other’s shock and pain. Their shared past blossomed into a shared future, as they start dating, then get married and built their own family. The second half of the book is less dramatic, but just as important as the first part. How can you rebuild a life when everything, absolutely everything has been taken from you? Dita shows us how, giving a hopeful ending to all the horrors that came before. The human spirit, she proves, is stronger than the evil that tries to squash it. Her book is an essential addition to any library of Holocaust literature and history.