Defying the Odds: The 2016 Elections and American Politics 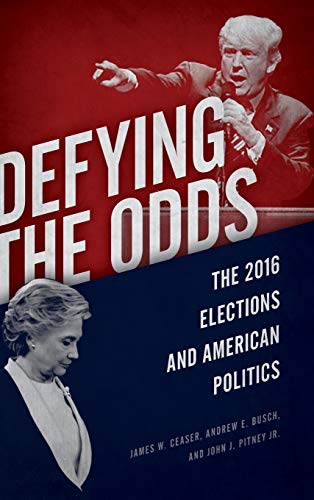 On any given day, the daily tumult of presidential politics and the reconfigured political paradigm have given voters a new set of keywords and phrases that bedevil the Administration and have the potential to throw our system of governance into chaos: Russia, impeachment, and obstruction of justice, to name a few. Much has been written about the ascendancy of Donald Trump, but global trends notwithstanding, can America’s modern political history shed light on our current reality?

Defying the Odds: The 2016 Elections and American Politics wants to create a theoretical bridge across the decades of presidential politics between the Clinton Administration and the Trump presidency, including shoehorned references to Jesse Jackson’s run for the White House in 1984 and 1988.

Zooming out, the book introduces readers to the strategies insiders and outsiders employ when vying for voters and a seat at the table among the entrenched political establishment in either party. The inside/outside entanglement of the recent election cycle may have its equivalent as early as the Great Depression, a period replete with anti-Semitic themes and birther-type references to FDR. Agitators fighting against intransigence and elitism is not uncommon, but the vitriol may have deepened and driven Americans ideologically further from one another than ever over the last 20 years.

A Jesse Jackson comparison to Trump fails to fully capture the significance of Jackson’s run that boosted enfranchisement of minority voters and increased minority representation. After a reference to Bernie Sanders’ endorsement of Jackson’s run in 1984 to provide some “outsider” bona fides to Jackson and Sanders through a historical cross-branding of sorts, the issues Jackson championed were not “settled” as the book intimates but rather swept under the rug and subjugated in favor of issues that met the urgency and expectations of the party and voters who were unwilling or otherwise unprepared to engage important questions of diversity and class equity.

Parallels to the 1992 Presidential race anchor the overall analysis by comparing breakout stars in that cycle: Pat Buchannan ran in a primary against George H. W. Bush from the far right, independent businessman and verbal flamethrower H. Ross Perot, and Arkansas Governor Bill Clinton who, according to an overestimation of the text, shares personal and political shortcomings with our new president.

Bill Clinton’s ultimate victory and stewardship of “new South” Democrats whose mix of support for civil rights and moderate-to-conservative views on many other issues became vexing for the Democratic base that decried NAFTA and denounced what many regarded as punitive welfare reform—measures that won GOP praise at the time but never materialized into full-fledged acceptance by the ranks of either Clinton.

The changing geography of jobs in our modern economy led to employment opportunities for high-skilled labor along coastal areas whose residents voted largely for Clinton and the Democrats. But job losses in old rust belt, middle America, and the South led to the “physical and psychological separation of college America and non-college America”—a ubiquitous talking point throughout the 2016 post-mortem. The writing was on the wall. Parties in power traditionally have trouble exploiting top-of-the-ticket coattails. And President Obama’s Affordable Care Act, his movement to full employment from double-digit unemployment, and increased wages did little to move the country toward its post-racial aspirations. In reality, perhaps America was a post-truth nation waiting for its chief spokesperson in Donald Trump.

Sadly, by the time readers get to a discussion about the 2016 candidates, the authors repeat much of the same odd characterizations including characterizations of Secretary Clinton that skewed much of last year’s coverage. Where Sanders’ age (he is six years older than Hillary Clinton) was an asset, statements like, “she was a grandmother in her late sixties. She had earned her wrinkles but, notwithstanding innuendos from the Trump campaign, there were serious questions about her health,” seem a tad sexist, out of place, and not material to the overall outcome since she was the highest vote-getter in both the primary and general election. Campaign strategy was, however, fair game but not given needed ink.

President Obama doesn’t get much better treatment. In Chapter 4, Race to the Bottom, Obama’s portrayal is that of a weak and indecisive leader.

Actually, much of Defying the Odds is a disapproving look at our politics. There is a lot to bemoan but there’s little analysis. Much of the content resembles a synopsis of media stories throughout last year’s cycle. Sadly, even less attention is given to some of the more nefarious themes: verbal (and now via Executive Order) affronts to the immigrant community, paternalistic positions on race/ethnicity, and Nixonian law and order rhetoric bolstering a narrative meant to divide working class voters from their core interest: economic stability.

Indeed, Trump’s presidency defied odds and created a massive disruption in American political traditions and institutions. The authors attribute much of the blame to the people and circumstances prior to Trump but not nearly enough to Trump himself and an exploitative campaign.