Defrocked: How a Father’s Act of Love Shook the United Methodist Church 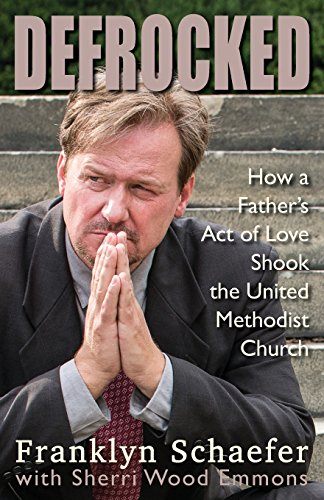 “When asked why his story was important, Schaefer said, ‘Even people who are conservative were saying, ‘If he hadn’t done this for his son, I would not only think of him as a bad father, but as a bad pastor.’”

The story of Frank Schaefer’s trial by the United Methodist Church in November 2013 splashed across the regional, national, and international news. Defrocked is the personal story of how Schaefer, born in Germany, came to be a United Methodist Pastor in Lebanon, Pennsylvania. The book follows his public and private dispute within his local church, his defrocking after he was found guilty of performing a same-sex marriage for his son, and his subsequent refusal to refrain from performing future ceremonies.

Defrocked, published just six months after the trial’s conclusion and before the appeals hearing set for June 20, 2014, focuses on specific events leading up to the trial and the courtroom drama played out over two days of proceedings.

In a recent interview, Schaefer explained, “I really didn’t get my day in court. I didn’t get to defend myself. I wasn’t supposed to say what I did say.” Parts of the book read more like testimony, giving specific events, names, and actions taken, like the defense case Schaefer would have presented during the trial. The book was a chance for Schaefer to tell his personal story, especially for most people who came to know the saga only after the verdict.

The build up to the case is carefully documented, outlining church disputes. These disputes are almost universal in church life, mostly stemming from worship wars, when the church added a contemporary style worship. Schaefer draws the connection with this long-standing dispute, a subsequent dismissal of the choir director and the official complaint.

Defrocked seems to purposively avoid integrating national and church events happening concurrently to the story. The Proposition 8 Supreme Court rulings on June 26, 2013 are never mentioned. The book also barely mentions the national United Methodist church’s discontent with Lesbian Gay Bisexual Transgendered (LGBT) issues. The book does include statements from both United Methodist clergy and other Christian clergy in response to the case.

Whether these omissions are because they did not play into the actions and thoughts of Schaefer and his family or to show how national stories were eventually distilled in the personal lives of one church in Lebanon, Pennsylvania, are left for the reader to decide. But this view of the church as acting alone and outside of general culture dynamics negates the real people within the church as simultaneously within a secular culture, whether that culture be for or against LGBT issues.

The effect Prop 8 and the growing number of states reversing similar legislation had on Schaefer’s trial can only be guessed; however, Schaefer does spend a short section of the book on the common scriptural arguments against homosexuality. While he doesn’t recreate the work of other theologians and pastors, he includes “. . . some general common sense observations.”

He states, “The conflict we are facing in the Christian church as a whole (United Methodist and otherwise) is rooted in our view of our holy writ, the scriptures and the Bible.” He then goes on to explain the literalist versus the contextualist interpretation of scripture as directly influencing the view of LGBT issues.

While the title of the book suggests a social commentary, the storyline keeps the effect of church action at the personal, familial, and local level. This is especially true when Schaefer reveals an anonymous phone call he received at the church office saying his son, Tim, was suicidal and gay.

Schaefer and his wife Brigette tearfully spoke with Tim, hearing how he remembered LGBT condemnation at a church meeting years earlier and was afraid to come out. Given the conservative community they lived in, the family kept this news private, allowing their son to come out to people he chose. So in 2006, when his son called and asked Schaefer to perform his wedding ceremony, regardless of church rules, “There was no way in hell I was going to say no,” Schaefer said.

When asked why his story was important, Schaefer said, “Even people who are conservative were saying, ‘If he hadn’t done this for his son, I would not only think of him as a bad father, but as a bad pastor.’”