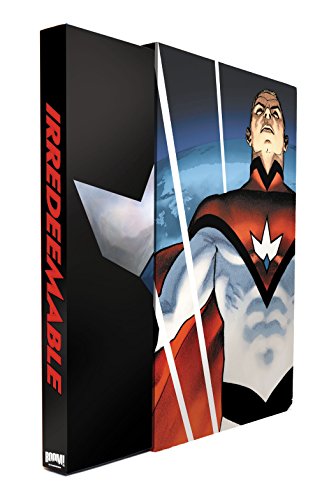 “What Mr. Waid has done is put a classic spin on a noirish, malevolent scenario for our almost infallible superheroes, making it delightfully wicked on an epic proportion. The story is intricately weaved with impending doom at each turning of a page, making it compulsive reading. The stunning artwork is richly illustrated by Peter Krause and Diego Barreto, whose pencils nail the exact balance between classic superheroes and the gritty realism of modern day anti-heroes.”

What if the world’s greatest hero decided to become the world’s greatest villain? Think Superman morphing into Lex Luther—with hair. Or Lucifer before he became the Prince of Darkness. That’s the entertaining if somewhat perplexing situation the reader is confronted with in The Definitive Irredeemable, the multiple Eisner and Harvey Award-nominated series from Boom! Studious.

Irredeemable opens its pages with Plutonian, formerly the world’s greatest superhero, (“the first and the best”) massacring the family—including children—of his one-time ally, the Hornet, by sizzling them to death with his superpowers. Before murdering Sarah, the last of the Hornet’s young children, Plutonian kills her father, and then callously whispers into her tiny ear: “Do you know who I am, Sarah? I am a superhero.”

Those seemingly innocuous words are perhaps the most chilling you will read in an opening chapter in any graphic novel you’re ever likely to buy. It’s skin-crawling stuff, and will leave most readers unnerved, to say the least. The perturbed sense that you are about to enter a very dark place, indeed, is now about to take hold, and will not leave you until the jaw-dropping denouement at the end of the story.

But first, what brought about this Jekyll and Hyde change in Plutonian, the superhero people always looked to when it came to saving them from evil and destruction? That is the profound and extremely disturbing question his former teammates, the Paradigm must ask as they try to save not only the world, but also themselves from their former teammate’s retribution. Revealed in numerous flashbacks, the Paradigm begin to assemble what information they know individually about Plutonian.

As their memories start to serve them, revealing past events, they begin to see the signs they were blinded to, way back then; signs that would have crucially told them that something just wasn’t kosher with Plutonian.

Unfortunately, one of the major problems and salient revelations for the Paradigm is that they know basically nothing about their one-time friend and comrade. Who is he really? What’s his weakness, if any? Does he have a family? His origins are blurred, to say the least, with only presumptions as diverse as Plutonian being an alien or perhaps even an orphaned mutant. The only solid fact is that he was sent from foster-home to foster-home, with each set of potential parents returning him after discovering his powers.

It’s not until the Paradigm speaks to Plutonian’s former sidekick, Samsara, that certain pieces start to fall into place in this very dark and malevolent jigsaw. Samsara reveals that Plutonian can see and hear everything on the planet. This eroded his confidence and belief in humanity by being forced to witness the most evil and vile acts humans could perform.

In addition, Plutonian feels hurt by a lifetime of betrayal, misunderstanding, and loss fostered by people’s unfounded fear that he would eventually turn on them—despite his incredible self-restraint with his powers and unwavering faith in others. How could they expect him to love them, yet they failed to reciprocate? More damaging for Plutonian was his own fear of making mistakes that would hurt people.

In the end, one of his mistakes led to the deaths of hundreds of children, forcing him to finally go over the edge, unleashing that lifetime of pent-up rage and frustration by turning on the world, destroying Sky City, his former home, and murdering millions including many of his former allies.

Is Plutonian indeed irredeemable? Will he destroy the last of the superheroes before they destroy him? Good people turning bad is not an original idea, per se. We’ve had it from Lucifer’s downfall to the dark side of Darth Vader. Even God can have his/her off days, and unleash a bit of anger in our direction.

Renowned Swiss psychiatrist, Carl Jung, in his timeless book, Answer to Job, depicted evil as the “dark side of God.” What Mr. Waid has done is put a classic spin on a noir-ish, malevolent scenario for our almost infallible superheroes, making it delightfully wicked on an epic proportion. The story is intricately weaved with impending doom at each turning of a page, making it compulsive reading. The stunning artwork is richly illustrated by Peter Krause and Diego Barreto, whose pencils nail the exact balance between classic superheroes and the gritty realism of modern day anti-heroes.

There are so many added bonuses in this omnibus it would be impossible to add them in this review. There is a foreword by the Academy Award-nominated and acclaimed documentarian, Morgan Spurlock of Super Size Me, and an afterword by the legend Grant Morrison.

It would, however, be remiss not to mention all the original covers on display, from John Cassaday, Dan Panosian, Paul Azaceta, Gene Ha, and Jeffery Spokes, all gorgeously rendered and stunning to behold. A conceptual gallery alongside a story tag is the icing on the cake for fans of the series.

Boom! Studious has shown the Big Two (Marvel and DC) the way a classic collection should be handled: with love and care. Each omnibus has sewn binding and is filled with excellent glossy paper stock, making it a pleasure for the fingers to turn the page. The color of the illustrations is vibrant and pleasing to the eye. With its deluxe slipcase, The Definitive Irredeemable Vol. 1 exhibits quality throughout.

Buy this monumental work of art for that very special someone in your life, the someone you love most of all—yourself.