In Defense of Looting: A Riotous History of Uncivil Action 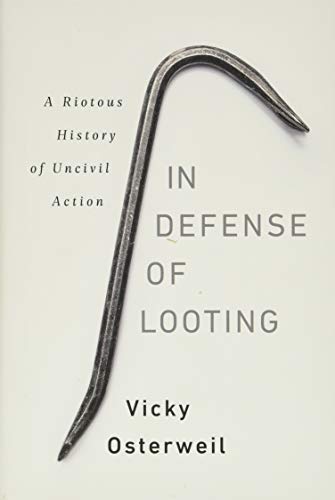 “In Defense of Looting is a reflection on violence as a form of social protest that can lead to social change.”

In response to growing protests in Minneapolis, MN, following George Floyd’s murder, President Trump tweeted on May 29th, “When the looting starts, the shooting starts.” If there ever was a time for a book to fully explain the role of lotting in society it is now. Vicky Osterweil's study, In Defense of Looting: A Riotous History of Uncivil Action, is a first step in such an explanation.

As the author makes clear, the concept of “looting” has a long history. Its origin in the Sanskrit term “lut” that meets “to rob” and entered the English language in 1788 as a word for plunder and mayhem.

She insists that the word looting is used to prejudice consideration of unrest as a rational, if enraged, critique of unequal social relations. She contends that invoking the term looting often prevents acknowledgement that such actions represent a revolt of the oppressed.

Osterweil offers a radical critique of an often strongly criticized mass, popular action. She argues that stealing goods and destroying property are direct, pragmatic strategies of wealth redistribution. She repeatedly claims that such distribution can improve—if only temporarily—the lives of the poor. Going further, she insists that such acts of protest are direct attacks on the common belief in the absolute sanctity of private property and ownership.

Osterweil links looting to social uprisings or riots as a “radical and powerful tactic for getting to the roots of the system the movement fights against. The argument is not that all instances of looting increase freedom, are righteous or politically anti-propertarian.” Most pointedly, she argues:

“If protesters hadn’t looted and burnt down that QuikTrip on the second day of protests, would Ferguson [MO] be a point of worldwide attention? It’s impossible to know, but all the nonviolent protests against police killings across the country that go unreported seem to indicate the answer is no.”

She notes that looting and burning of a QuikTrip in Ferguson is but one of a growing number of such acts of protest. In Brooklyn, NY, the killing of Kimani Gray in 2013 led to the looting of a bodega and a Rite-Aid store as well as innumerable similar actions throughout the country over the last decade.

In Defense of Looting is a reflection on violence as a form of social protest that can lead to social change. She links riots and looting as a tactic to challenge state authority and, especially, policing. She details the history from the 17th century English night watch through European colonization of North America and the looting of Native Americans of their lands, goods, and lives.

Most of her study is a painfully recapitulation of the long, long history of anti-Indigenous and anti-Black oppression that dates from the nation’s very origins. Her focus is on the role of, first, slave patrols and, more recently, the urban police in suppressing Blacks and other people of color in America. She argues that in riots and looting, oppressed people not only gain a political voice and regain their humanity, but actually help one another  by sharing the “loot” expropriated and, in some remarkable actions, build viable political organizations.

She discusses the changing role looting has played in U.S. from Old South plantation society and Jim Crow tyranny to the making of modern urban America. She doesn’t mention how, in 1838, Pres. Martin Van Buren sent 7,000 soldiers to remove Cherokee Natives from their homes in Georgia. The troops forced the Cherokee into stockades while whites looted their homes. By 1840, tens of thousands of Native Americans were driven off, and looted of, their land.

In one of the most illuminating chapters of her book, Osterweil details how in the wake of the riots in Watts, Detroit, and Newark, radical organizations emerged that carried forward the inchoate demands of the looters. For example, in Los Angeles, militants formed the Black Congress; in Newark, the movement formed the Community for Unified Newark (CFUN); and in Detroit, Black nationalists established DRUM (Dodge Revolutionary Union Movement). This process continues as indicated in formation of Black Visions, led by African American gender nonconforming women, in the wake of George Floyd’s killing.

The author offers an otherwise comprehensive overview of the Los Angeles riot of 1992 that followed the acquittal of the four police officers for the beating of Rodney King. However, she briefly mentions in passing, “Rioters systematically attacked Korean businesses.” She then quotes a questionable source, the Aufheheb Collective, which claimed: Koreans in 1992 were “on the front-line of the confrontation between capital and residents of central LA—they are the face of capitalism for these communities.”   She failed to report that the riot led to more than 1,000 buildings being destroyed with damage nearing $1 billion and that Koreatown suffered $850 million worth of damage, half was in Korean-owned businesses.

The fundamental weakness of Osterweil’s otherwise compelling book is its over-determined focus on African American riots and looting. Her historical narrative about Black suffering and the horrendous role of police violence inflicting this suffering is, sadly, all too true. Her narrow focus reenforces the latent racism she is seeking to challenge. The tenor of her well-intentioned study is that only Black and Indigenous people riot.

Her treatment of riots involving white people is woefully inadequate to fully appreciate the place of social struggle, and looting, in American history. She gives short shrift to 1773 Boston Tea party, failing to note that Colonial protesters climbed aboard three British ships and dumped 342 chests (45 tons) of tea, worth an estimated $1 million, into Boston Harbor and the “party” was one of the first acts of violent civil disobedience that led to the Revolution.

She also makes no mention of urban working-class riots of the 19th century and the looting that accompanied them. For example, the 1857 New York gang war that pitted the Dead Rabbits against the Bowery Boys was a gang war between immigrant, working class men and boys that not only led to a citywide battle but widespread looting and pillage.

And then there was the blackout of 1977 that swept New York City. Neighborhoods like Crown Heights and Bushwick were devastated; in Crown Heights, 75 stores on a five-block stretch were looted, and in Bushwick 35 blocks of Broadway were destroyed with 134 stores looted and 45 set ablaze. In the Bronx, 50 new Pontiacs were looted from a dealership.

In 1992, as the riots in L.A. raged, Bill Clinton, then governor of Arkansas, warned: “People are looting because they are not part of the system at all anymore.” He added, “They do not share our values, and their children are growing up in a culture alien from ours: without family, without neighborhood, without church, without support.”

One can only wonder what Clinton would say in 2020 as an ever-growing number of Americans are feeling that their link to the “system” seems increasingly tenuous as Covid-19 takes its toll, the economy flounders, and evictions increase. Is more looting on the historical agenda?