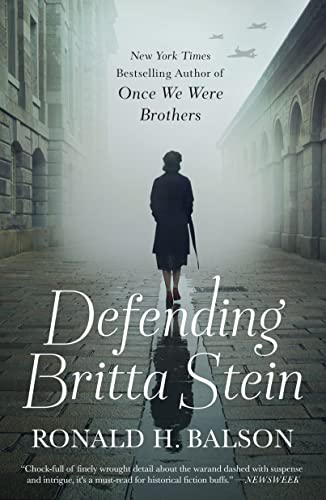 “Defending Britta Stein makes vivid an important part of Holocaust history, one that is less familiar to the general public and deserves all the more to be better known. . . . Strong storytelling with a rich cast of characters and a suspenseful plot.”

Part courtroom drama, part Holocaust history, Ronald H. Balson merges both in this page-turner of a story. When an elderly woman spray-paints graffiti on a local restaurant, calling the owner a “Nazi Agent,” “War Criminal,” and “Collaborator,” among other accusations, she’s charged with defamation. The defense can only be that such words are true. But will Britta Stein, the frail 90-year-old woman who admits to the painting, prove that? Can her lawyer, the redoubtable Catherine Lockhart, find evidence to corroborate such accusations?

Balson brings us back into the history of the Nazi occupation of Denmark, where both Britta and the restaurant owner Ole Henryks come from originally. Britta has intensely personal reasons for her angry words, spurred by the recently announced intention to honor Henryks at the Danish-American Association for his “heroism” during the war.

Britta’s testimony unfurls throughout the book, placing us in Copenhagen right before the German occupation when life for Jews was “normal,” and nobody faced antisemitism, at least not according to Britta’s memories as a teenager. Catherine pushes Britta for not seeing the obvious peril once the Nazis invade, but Britta holds firm, insisting that the Danish had been promised special treatment, to be allowed to continue self-governance, unlike occupied France, Poland, and the Netherlands. As other Jews of the time wrote, why would Hitler even bother to occupy Denmark, since he could always “phone” and tell them what to do.

This kind of complicity isn’t dealt with in the book, and the Danish are held up as one of the rare people who stood up to the Nazis and actively helped their small Jewish population. The massive transport of Jews out of Copenhagen in small fishing boats has been well documented and was partly greatly altruistic, partly war-profiteering (with captains well paid to carry their human cargo across the narrow waters to Sweden). The end result however was clearly anti-Nazi, and Balson serves his subject well by focusing on the heroic aspects.

By drawing out Britta’s story chapter by chapter, the effects of the occupation year after year are made more viscerally vivid. And it keeps up the narrative tension—does Britta indeed have the necessary proof to accuse Henryks or is what she says opinion and hearsay only?

Beyond Britta’s evidence, Catherine sends her husband Liam, a resourceful investigator, to Copenhagen to track down other proof. In fact the Nazis kept good records of payments made to informers, but Liam relies on other slim findings. Will it be enough? And will Britta’s health hold out to allow her to testify in person?

Defending Britta Stein makes vivid an important part of Holocaust history, one that is less familiar to the general public and deserves all the more to be better known. And beyond history, it’s simply strong storytelling, with a rich cast of characters and a suspenseful plot.