Deer Creek Drive: A Reckoning of Memory and Murder in the Mississippi Delta 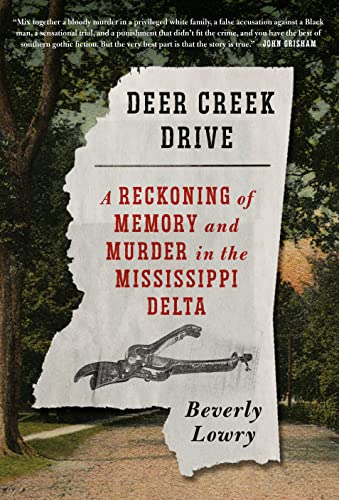 It is a lyrical way to describe an account that is as much about the community and the times as about the portrayed crime.

In November 1948 Idella Thompson was murdered, stabbed at least 150 times, in her home. Petite, elderly, and white, Thompson was from a prominent family with a long history in the Delta. Lowry’s family was far less rooted. Although raised in the Delta and white, Lowry situates her family as being on the fringes, always just outside the world the Thompsons inhabit. Her family home is at first a dream then a reality then a memory as Lowry’s father strives, fails, and falls.

And yet Lowry doesn’t shy away from admitting she was also very much a part of the privileged white population in the Jim Crow South. This becomes important as the story shifts from a true crime saga to a story about race after Thompson’s adult daughter Ruth Dickins accuses a Black man of Thompson’s murder. Dickins was the last to see her mother alive. At first Washington County Sherriff Hugh “Hughey” Foote takes her at her word regarding a Black intruder, despite a lack of evidence to support her claim.

“Mrs. Dickens [said] it was a Negro who did it and I thought nothing else but that it was a Negro,” he says when questioned by the district attorney.

To a lot of people at the time this made sense, writes Lowry. Mrs. Dickins is blindly believed because of the color of her skin and her family’s reputation. It comes as a surprise when she later faces trial for, and is found guilty of, her mother’s murder. But even as a convicted felon Dickins’ hardship pales compared to others, especially that of the Delta’s majority Black population. When Dickins suffers a rash and other non-life-threatening physical ailments while incarcerated the governor pays attention. According to Lowry’s account the governor seems more concerned with Dickins’ health than with the backlash following the acquittal of the men who killed Emmett Till.

Dickins was special. She was born a Thompson, and in the town of Leland in the mid 20th century that meant something. Her trial captivates the region the same way big trials do today. Attending court is a spectator sport with fans packing picnic lunches or buying cokes and hot dogs on sale for the occasion. This part feels familiar, what happens to the courtroom at night when cots are brought in is not. Jury members must sleep in the very room they serve during the day. Their lives have come to a standstill as much as that of the accused.

Lowry covers the trial in detail, paying special attention to the outfits Dickins wore, just as the press did at the time. The crime, trial and its aftermath may be the core of the story, but they did not occur in isolation. Lowry regularly reminds the reader of happenings in her own life at the time as well as those of Dickins’ family and the larger community. College football rankings and debutante balls mark the passage of time alongside campaigns for Dickins’ release and coverage of Brown v. Board of Education. Lowry, who was ten when the murder occurred, is an observer and sometimes a player. She follows Dickins’ case in the news. A schoolteacher asks her to memorize and recite a prepared speech against school integration for the media.

Into this limited society Lowry inserts the story of two Black men fingered for Thompson’s murder, the scapegoats Dickins’ supporters eagerly put forward. One suspect is in a mental institution after killing two people when he was just 16. The second had the bad luck to mention the murder in passing while being questioned for another crime. What we learn about their lives offers little hope of anything but a bleak future.

The futures of several poor white inmates Lowry chronicles end by suicide for one and death at the hands of fellow inmates for another. There are economic as well as race divisions in the Delta. Lowry covers the class divide while making clear it was minor compared to the color divide. The Delta comes across as a dark place, and yet Lowry still finds pockets of light. At one point she highlights something everyone shared: dance music. When the beat rises they all danced.

“Not that we danced together. But we all did it.”