Deep Past: A Novel 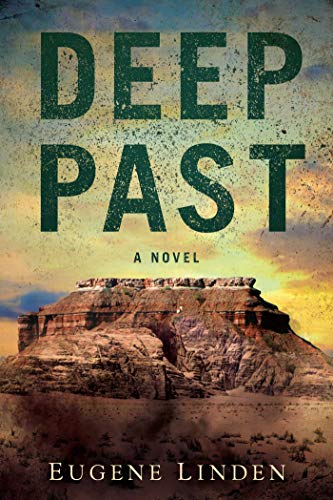 “The ideas Eugene Linden works with are compelling, and they have sharp relevance to today’s real-life headlines.”

Anthropologist Claire Knowland is leading a routine dig in the far steppes of Kazakhstan when a stranger turns up at her camp with an odd request: Will she travel with him to an isolated location within a nearby mining project to take a look at an unusual find? And will she do so without telling anyone else what she’s doing?

What Claire discovers will throw her career into turmoil and threaten her academic reputation as international politics, the ruthlessness of a Russian oligarch, and the sheer excitement of a five-million-year-old discovery plunge her into a mystery involving non-human intelligence, climate change, and the dangers involved in violent revolutionary politics.

Deep Past is Eugene Linden’s first venture into fiction. Well known for his articles in National Geographic, Time, and Saturday Review, he has published notable nonfiction books such as Apes, Men and Language (1975; 1981), The Parrot’s Lament (1999), and The Winds of Change (2006).

Linden has long sought the answer to a fundamental question regarding humankind: How did it happen that in a blink of an eye, relatively speaking, homo sapiens managed to take control of the destiny of this entire planet and every ecosystem and species on it?

In Deep Past, he asks another, complementary, question: What if it’s not the first time in the history of the earth that this kind of intelligence has appeared?

Linden tackles some very large questions in this novel, with mixed results. His decision to try fiction for the first time—science fiction, at that—gives him an opportunity to stretch his ideas on climate change and the political manipulation of scientific truths in new and interesting directions, but good fiction requires a skillset that often doesn’t manifest itself the first time out.

Indeed, Deep Past shows many of the stress marks of a debut novel. While Claire Knowland is a likeable protagonist, the other characters around her are flat and predictable, and their interactions are a bit unconvincing. In particular, Linden’s attempt to maintain a romantic subplot for Claire is ham-fisted and awkward.

His story advances in fits and starts, and the plot tends to loop a bit. First Claire disappears in a total funk back in the States, then it’s the turn of her headstrong assistant, Katie. Apologies and hugs all around, with scary über-brain Dr. Will Keerbrock waiting uncomfortably in the background each time to confer his reluctant approval.

As well, Linden tends to favor a rather indirect style when it comes to storytelling. When Keerbock repeatedly cautions Claire and her team not to include material in their paper that touches on ambiguous, subjective concepts like language and intelligence, but rather to let others infer what their discovery might mean in those areas, he might be speaking for Linden himself, who forces the reader half the time to sort through the scientific debates and clandestine sorties into danger to guess where the author is going to take us. A more straightforward and direct narration would have been preferred.

Nonetheless, Deep Past is a novel that you’ll most likely keep reading until you reach the end. The ideas Eugene Linden works with are compelling, and they have sharp relevance to today’s real-life headlines.