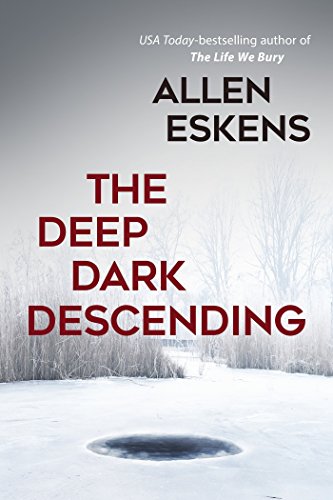 “Despite the awards, despite the glowing testimonials from the usual lineup of similar authors, and despite the status as a USA Today bestselling author . . .”

Homicide detective Max Rupert is obsessed with his wife’s death, which was caused by a hit and run driver who was never found. He puts his career at risk by searching fruitlessly for answers until the day he receives indisputable proof that she was murdered. Now he is reluctantly involving his partner, Niki, in an off-the-books investigation that will lead him to a frozen lake near the U.S.-Canadian border and a decision that will change his life forever.

The Deep Dark Descending is the fourth novel by Allen Eskens, a former criminal defense attorney who also has a degree in journalism from the University of Minnesota and has studied creative writing at Minnesota State University-Mankato, the Loft Literary Center, and the Iowa Writers’ Summer Festival.

His first novel, The Life We Bury (2014) was an enormous success, winning the Barry Award, Silver Falchion Award, and the Rosebud Award while shortlisting for the Edgar Award and Anthony Award for best first novel. Clearly, given the extensive creative writing coursework, he has always held a strong desire to write, and the success of his first novel would seem to have been the proof in the pudding that his career switch was a wise one.

Fast forward to his fourth offering which, like most novels, has positive things going for it and negative things holding it back. On the positive side, he uses an interesting plot structure to build momentum as the story proceeds. Alternating between the present, in which Rupert holds his quarry to account in the middle of a frozen lake, and the past three days, in which he tracks down the man he believes murdered his wife, Eskens successfully builds suspense and keeps the reader asking questions until the final chapter. It’s a good storytelling device, and Eskens deserves credit for managing it well.

On the negative side, his characters fail to engage. While we remain interested in what Rupert will ultimately do, there’s not enough depth to his character for us to particularly care one way or another which choice he makes. He is clearly an Angry Man Crashing Around in a Very Cold Place, but his quest for vengeance and rather contrived battle with his conscience leave no room for subtleties. He’s the kind of protagonist you shoot out of a cannon to see how far he goes.

As for the secondary characters, there’s pretty much nothing to say. Rupert’s partner Niki has a surname, but if you didn’t write it down when it finally popped up you wouldn’t remember it. It’s Asian, because their foul-mouthed superior describes her to Rupert as “quite the little geisha” who “struts around like she’s queen of the fucking Mekong Delta,” but beyond that it’s difficult to remember. Japanese? Vietnamese? Not sure. The other supporting characters are equally as flat and superficial.

The Deep Dark Descending is billed as a police procedural, but therein lies the other problem with this novel. The offensive supervisory lieutenant who needs to be put down, the corrupt senior cop, the non-white female partner, and the rest of the police trappings all seem inspired by Michael Connelly’s Harry Bosch series, but the whole thing presents itself as a cut-and-paste exercise without a life of its own. The police environment and police work come across as unrealistic and amateurish. While Connelly’s journalism background provides a solid basis for his fiction, Eskens seems not to have similarly benefited from his experience as a criminal defense attorney.

At the end of the day, it’s clear that while Eskens was obviously a good creative writing student and learned how to structure a brisk, interesting plot, he’s not a natural. His writing style is uneven and at times cringe-worthy. For example, when Rupert interrupts his ice drilling to demand his captive’s birth name, he shouts: “‘I’m not asking you what you call yourself now. I want you to tell me your real name—the name they gave you when you popped out of your momma’s lady parts.’”

Despite the awards, despite the glowing testimonials from the usual lineup of similar authors, and despite the status as a USA Today bestselling author, Eskens has given us a novel in The Deep Dark Descending that merits no more than a C+. More work needed, Allen, in the areas mentioned above.