The Decline of Nations: Lessons for Strengthening America at Home and in the World 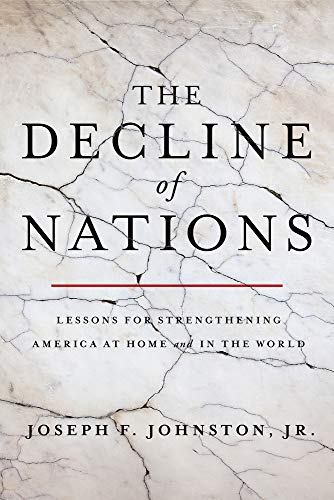 “Johnston . . . reaches back to the rise and fall of the empires of Rome and Great Britain to diagnose America’s current decline and to seek possible solutions for reversing the decline.”

Joseph Johnston, Jr.’s new book The Decline of Nations could not be more timely or important. The United States is more divided today—politically and culturally—than at any time since the American Civil War. The leader of the Texas Republican Party and others have raised the prospect of secession. In the current issue of National Review, Terry Teachout, a leading cultural critic and observer, writes about the country’s “unbridgeable chasm” that is leading to “soft disunion.” How did we get here?

Johnston, a lawyer and visiting professor at the University of Virginia Law School, reaches back to the rise and fall of the empires of Rome and Great Britain to diagnose America’s current decline and to seek possible solutions for reversing the decline. He is not optimistic but sees certain “indicia of continued vitality” that provide some hope.

America’s decline, Johnston believes, is largely the result of internal factors—economic, political, and cultural—that have torn the nation loose from its founding principles and weakened the institutions that led to America’s rise to greatness. There are echoes here of Gibbon, Spengler, and Toynbee, all of whom Johnston cites. He also discusses the ideas of the 14th century Arab historian Ibn Khaldun who wrote about the cycle of civilizations. Khaldun observed that successful civilizations frequently declined after their elites and citizens became addicted to leisure, luxury, and abundance.

One reason for America’s decline is fiscal irresponsibility resulting from the growth of federal entitlements and the consequent growth of centralized power. Franklin Roosevelt’s New Deal and Lyndon Johnson’s Great Society changed the relationship between the federal government and its citizens and upended the delicate and important balance between federal and state power known as federalism.

Johnston traces the intellectual roots of the attack on federalism to Woodrow Wilson’s book Constitutional Government in the United States (1908). Wilson viewed the Constitution as “a machinery of constant adaptation,” i.e., a living document. Wilson believed, Johnston explains, that the industrial revolution “united the nation in ways that render[ed] state boundaries meaningless.”

The New Deal, Johnston writes, moved the country “toward a collectivist approach to social policy.” FDR launched the administrative state and promoted the idea of an “economic bill of rights.” LBJ’s Great Society went further, expanding the reach of federal power beyond even what FDR envisioned. Together, Roosevelt and Johnson, with an acquiescent Congress and Supreme Court, “drastically altered the original constitutional framework that had established a central government of limited powers.”

The vast expansion of federal power coincided with America’s cultural revolution in the 1960s, which challenged the old “Victorian” attitudes toward marriage, divorce, sex, religion, illegal drugs, authority, patriotism, nationalism, and morality. America’s WASP elite class was soon replaced by an elite class that was nurtured by the “values” of the ’60s counterculture and that infiltrated and gradually coopted America’s cultural and educational institutions. And after 1972, the new elite class took control of the national Democratic Party.

As in Rome and Great Britain, the decay in the United States started at the top. In today’s America, the dominant elites increasingly look with disdain on what they view as their political and cultural inferiors—people who former President Barack Obama said cling to their religion and guns, and who Hillary Clinton famously called “deplorables.” Today’s dominant elites promote multiculturalism, favor globalism over nationalism, and view themselves as citizens of the world.

The new elite class has undermined what Johnston calls the “forces that contribute to national cohesion,” which include: a common language, nationalism, military power, economic strength, social stability, and the rule of law. Instead, the new class has fostered “cultured hedonism” and the “omnicompetent therapeutic state,” and repeatedly decried the sins of Western civilization. These elites, Johnston writes, “no longer support the virtues of duty, honor, and country.”

Johnston points out that our elites have also extended America’s foreign and defense commitments beyond the capacity of the nation’s resources, a situation that Walter Lippmann warned about in the 1940s. America’s imperial overstretch, Johnston believes, undermines our ability to focus on threats to our vital national security interests—China, Russia, and Islamic terrorism. Johnston is very much a foreign policy “realist,” and proposes policies hearkening back to the Nixon Doctrine of the early 1970s.

Britain’s imperial decline in the mid-20th century can be traced to two world wars, but also, Johnston explains, to “economic decline, imperial overstretch, the decay of discipline, egalitarian envy, utopianism, hedonism, relativism, the decline of the family and religion, excessive regulation, and lower educational standards”—all factors present in today’s America.

The historic parallels between today’s America and Rome’s decline are also striking. In the late third and fourth centuries, Rome suffered from confiscatory taxation, increased government centralization, stagnant productivity, corruption among the elites, the decline of religion, cultural hedonism, imperial overstretch, a moral and spiritual collapse, and a loss of will.

Meanwhile, America’s political divide continues to grow. After the 2016 election, roughly half of the country—led by the major cultural and elite institutions—refused to accept Donald Trump as a legitimate president. In 2020, roughly half of the country—led by the populist, nationalist “deplorables”—refuses to accept that Joe Biden legitimately won the election. And this political divide comes at a time when the Chinese Communist Party seeks to replace the United States-led liberal world order.

Johnston notes that the United States is still the world’s strongest military and economic power, but Rome and Great Britain were, too, before internal decay caused their decline and imperial collapse. To reverse America’s decline, Johnston writes, we need “cohesive communities with shared values in which civility, honor, and self-discipline can be sustained” and a “rediscovery of the spiritual sources of moral order.” It may be too late for that.