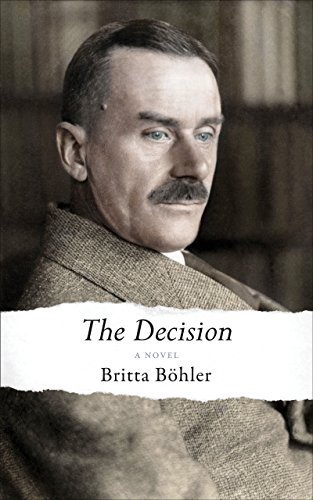 The Decision, a brief new novel by Britta Bohler, can be summed up with a simple yet elegant sentence lifted from early on in the text:

“Winter was not his season.”

The summation aside, The Decision is, to be equally brief about it, a splendid novel.

Place the above summation in context and find it a jewel in a rich gold band:

“Loudly honking, a black car passes; water splashes to all sides. He avoids a large puddle and crosses the street. He detests this nasty wet weather, these dark days when even during the day you have to work by electric lights. Winter is not his season. In November, when the days shorten and the cloudy, grey sky narrows our vision, it would be good to be able to crawl into a hole like hedgehogs and marmots. Right now he’d love to curl up on a soft bed of hemp and grass and not wake up until spring . . .

“It starts to drizzle. Thin rivulets on his glasses. He feels the wetness on his neck. How stupid that he hadn’t taken an umbrella. He pulls up his fur collar and quickens his pace.”

If the description reminds the reader of the reason Mann’s own fictional creation Gustav von Aschenbach rushed off to Venice, only to die during his winter holiday, the comparison is apt.

The Decision examines an ever-so-slightly fictionalized life of Thomas Mann, author of the novels Death in Venice, Buddenbrooks, and Magic Mountain, among others. A rich man, a famous man, a man renowned throughout Germany and the whole of the literary world, Thomas Mann is also a political animal—a man who is passionate in his beliefs, as well as a man well satisfied with the bounty he had accumulated in his lifetime.

Set in 1936, The Decision unfolds during three key days Mann’s life, who, with his family in tow, escaped Germany (first to France and then, later, and more permanently, to Switzerland and the United States) during Hitler’s ascent to power.

While watching the collapse of the German culture that he so cherished, Mann (with some prodding from friends, family members, and cultural critics ) decides to write a public letter denouncing the Nazi government and explaining his reasons for leaving Germany.

He completes his letter and has it delivered for publication.

Then he hesitates and considers the cost of his public protest. Already much of his property has been seized. A public stand against the Nazis will most certainly result in the loss of everything—the rest of his properties taken, his books burned and outlawed, his publishing company ruined and its employees unemployed and likely unemployable, and worst, a lifetime in exile, away from the country that had been the wellspring of his literary art.

Mann vacillates. He reconsiders. He contacts the editor to wait, to not publish the letter, to just hold onto it while he decides whether to make it public or not.

The bulk of the novel is an interior monologue, as Mann searches within for his titular decision while going through the motions of ordinary life.

The Decision is, surprisingly, Bohler’s first novel, although it reads as if she had written a dozen or more. The work is, all at once, lean, thoughtful, quietly powerful and exquisitely written in a language and sense of detail that rivals Mann’s own.

And perhaps the most remarkable aspect of the work is how perfectly Bohler is able to write in Mann’s own voice. How well she captures his cadence, his sense of passion lacquered in layers of success and entitlement, entwined with an inborn knowledge of right and wrong. Even better is Bohler’s skill in layering, ever so subtly revealing, Mann’s motivations—his love of wife and family coupled with his lifelong homosexual longings, his love of his native country intermixed with his hatred of its newly appointed government, his wish to please those who would thrust him forward, a famous author, to take a stand vying against his fear of the cost of such a stance.

Bohler has done scrupulous research on her subject matter and paints her portrait of Thomas Mann in fine detail. Further, she captures the historical moment with pitch-perfect accuracy.

Living very nicely in a rented villa just outside Zurich, Mann, even in exile, maintained a level of comfort far better than those living in the Germany he left behind. And while he dithered over comparisons between Munich and Zurich, Dr. Korridi denounced.

As no less than the New Republic reported the event in a spring edition in 1936:

“Now at last he [Mann] has broken his long silence, evidently deciding that the truth was more important than his literary career. The immediate occasion was an article printed in Switzerland by Dr. Korrodi, the literary critic of Die Neue Zuricher Zeitung. Korrodi attacked the German writers living in exile—they were for the most part novelists, he said, the good poets and essayists having stayed at home; and they represented the international Jewish influence in German letters, which the fatherland could easily dispense with. Mann came to the defense of his fellow exiles.”

Thus, the historical document that was and is Thomas Mann’s letter was created for a dual purpose. It was, at once, Mann taking a public stance against governmental evil and his rebuttal against a critic whose commentary he despised.

The dilemma, of course, is that Korrodi had a point—Mann truly opted to put personal needs over national and/or cultural. He became a cornerstone of the so-called Exilliteratur, the German authors who fled the county and Nazism. As a Nobel Prize-winning writer, Mann was held in great esteem in Germany, even by Hitler himself, so much so that the German government offered to allow Mann the right to return to Germany and the restoration all of his possessions, if he would only say “a few kind words” about the fuhrer.

Thus it all comes down to this: the decision. History records what Thomas Mann ultimately decided, which path he chose to take.

In Bohler’s novel, it is as if Thomas Mann were standing in the middle of the frozen lake in front of his house, with the sense that the ice is cracking ever so slightly with each passing moment, each taken step. The sense of fear, of loss is palpable: losses past and the great, deeper losses still ahead.

With it is the sense of exile, of becoming an emigrant (a word freighted with the implications of strangeness, otherness, poverty, suspicion and rejection, then as now), ripples—as if it were the cold dark water flowing under the cracking ice.

“The emigrant carries with him all of his home and some of his fatherland from person to person on the soles of his fee and in a small bundle.”

And thus the crux of Mann’s unwillingness to make his decision—the moment of knowing what must be done but not wanting to pay the price of doing it.

That Britta Bohler is able, through some magic, to capture all this, along with her ability to create her fictionalized Mann at once as a misogynistic brat in his treatment of his wife and their maid, a poser child for OCD, and an artist and intellectual—all in the same moment, all in 220 little pages—stands in testament to her authorial gifts.

And then there is also her language, her ability to ape the smooth calm layered over the turbulent core that inhabited the best of Mann’s own writings, coupled with the poetry, the music of her words themselves. As here:

“He places his half-smoked cigarette in the ashtray and sips his vermouth. It’s so quiet here. The thick carpets absorb the sounds of the world.

“At the time when he visited Katja in the sanatorium, he quickly escaped the temptation of the thick carpets; three weeks of isolation were more than enough. He had not felt the need to flee the present. But who knows what he would do now if he had the chance.

“A couple with two children walks past him to the reception. The man wipes the sweat from his forehead. The woman looks nice in her dark blue suit and is wearing a smart hat. They have a lot of luggage, large brown suitcases with metal corners and small embroidered travel bags. The porter snaps his fingers at two bellboys who carry the suitcases to the elevators. The young woman gives them directions in French. ‘Oui, merci,’ he hears and, ‘Faites attention.’”

Britta Bohler has written an important book, a beautiful creation. The Decision stands as a remarkable beginning of a literary career.