Decade of the Brain: Poems 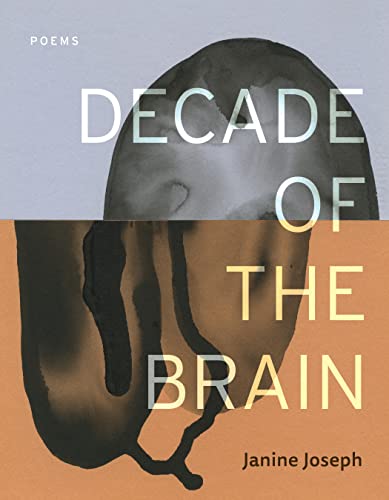 “The chief function of the body is to carry the brain around,” quipped Thomas Edison, and he was, of course, right. The brain is the all of us, no matter what we might tell ourselves: brain death is the only true death there is, losing one’s mind the only ailment for which we have no Virgil to guide us through hell. In a godless world, the brain is what makes us gods: its tender trap of memory, the sensitive jewels of its eyes, the instrument of its ears, its arabesque of suspended nerves.

Ask any ancient what happens when you hit a god, and they’ll answer without pause: the gods hit you right back.

In 2008 the poet Janine Joseph was in a terrific car accident, hit from behind and altered forever. The Decade of the Brain, her new book of poetry composed over the titular years, is the product of fulfilling what Edison called her body’s chief function.

It is meandering, challenging to read and challenging to absorb, and intentionally so: It is the recounting of a nightmare and, like all the morning-after retelling of dreams, doesn’t always line up cleanly. Joseph is what Hitchcock and the FBI call an unreliable narrator, not by default of character but a defect in the machinery. The poetry here does not so much transcend the author but step to her side.

If the brain is all we are then it makes sense that, even in autobiography, the self of the author stands outside the self of the subject, when we become even to ourselves abstract. Yes, Janine Joseph created “Decade of the Brain,” but is not the Janine whose story is told in these pages, because every day we become new people, and in the author’s case her brain was rattled around its pan to elevate her even further firmly into the third person.

That it’s written over many years feels obvious: One can feel in its reading the shifts in time and voice in its writing. The style, the substance, the memory evolves. And of course it does; time moves in only one direction. We can never go back. And Decade of the Brain raises a question, here, that it does not necessarily answer: What obligation do we have to all the people we used to be?

If, at times, the work feels effortful it's because, well, it is; healing takes time. Poetry takes time. The author, after all, has had to write 40 poems while carrying a brain around.

The synapses do not always connect, and the sparks sometimes misfire in a way that’s intentional and, if one can describe the after-effects of a traumatic brain injury this way, delightful. It’s the mark of the ability of Joseph—an intelligent and careful author—that she is able to paint a portrait of insufficiency so sufficiently. It’s the poetry of the beginning of days and the poetry of the ends of days, that first half hour and last half hour of the day are hardest to see, as we wipe the sleep from our eyes and then, again, struggle to keep them open, spending all that time at home but unfocused.

No one else could create this. Yes, she dives into common troubles that all those with medical ailments know, struggling to be comprehended by herself, by her doctors (she began feeling/she apparently suffered/she is however she offers in reductions of doctors’ statements) but also the uncommon: No genre exists, to our knowledge, of brain trauma-induced poetry.

“My own brain is to me the most unaccountable of machinery,” wrote Virginia Woolf—"always buzzing, humming, soaring roaring diving, and then buried in mud. And why? What's this passion for?”

It is a work to be read closely, nearer, at times, to visual art than literary, with both linear illustrations and unusual poetic forms and shapes. The old logic holds that the best classical musicians make the best jazz composers; you need to understand the whole of the pieces to reassemble them. So it makes sense, here, that a poet can take the prose of life and break it down into pieces, the way she too has been, palpably, reimagined. Decade of the Brain is 84 pages of elaborate metaphor wrapped around a body. An inky caduceus. It is trim. It is intentional. It is all neurons, and it is, in the end, all nerve.