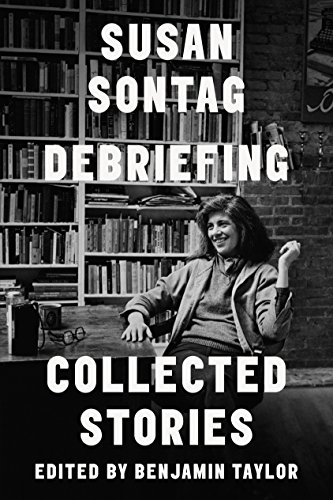 Ideally, a collection of short stories should have a unifying principle, a thought or purpose running through each one that makes the whole greater than the sum of its parts. A “collected stories” edition is the exception to that rule. Such a book is all the stories an author published, by its very definition, regardless of their subject or merit. Susan Sontag’s profile as a cultural influencer virtually guaranteed that a posthumous collected stories would crawl from her grave at some point. It has arrived, half-alive and staring wildly around.

Sontag didn’t consider herself a short story writer. Prolific as she was, in the course of her career she published only 11 pieces that might fall into that category. Editor Benjamin Taylor takes issue with critics who “have said that Sontag’s stories might as well be called personal essays.”

Yet some pieces in Debriefing are clearly and even luminously autobiographical. The opening stories spring from Sontag’s family history and childhood: her father’s death, her parents’ time in China, her own adolescence in the San Fernando Valley. “Pilgrimage” takes what could be a dry topic—Sontag’s childhood obsession with Thomas Mann—and transforms it into a surprisingly gentle comedy of teenaged mortification. “Project for a Trip to China” assembles fragments into a scrapbook of her childhood whose economy of language suggests a prose poem.

That fragmentary approach highlights some of the book’s most engaging pieces. “The Letter Scene” weaves passages from Pushkin’s Eugene Onegin with meditations on the nature of letters and the end of a marriage. The title story, “Debriefing,” uses fragments to lets its narrator approach the grief of a friend’s death.

Other stories abandon personal, earnest fragmentation for surrealistic satire. “The Dummy” and “Baby” subvert realist narratives about the American family with ingenious dexterity. Both of these are utterly modern and reflect the best of Sontag’s insight, savagery, and humor. When a gifted infant lapses into teenaged delinquency in the first weeks of his life, surely the parents must seek therapy (for themselves). If a man replaces himself with a realistic robot, should he not expect that robot to suffer from the same ennui that drove the original out of his upper-middle-class life?

That focus on white, upper-middle-class existence, though, undoes Debriefing’s less successful pieces. The American Society that Sontag’s work critiques has long since been skewered and left to bleed and rot while popular culture rolled on, reinventing itself cheerfully in new and equally absurd ways which have since also been mocked and murdered, resurrected and buried again.

“American Spirits” takes aim at the Sexual Revolution with blunted and obsolete weapons. “Doctor Jekyll” and “Old Complaints Revisited” sprawl across the page, corpses of wealthy white anxieties since forgotten by even their sufferers.

Taylor could perhaps have salvaged these artifacts with some curatorial intervention. When were the stories published? How do they connect do Sontag’s better-known critical writing? Yet even those inclusions would only lend the book a museum quality. Many of Sontag’s stories simply feel lost in the modern world. “The Way We Live Now” was acclaimed in 1986, but as it does little beyond acknowledge that men were dying of AIDS, the story’s interest is lost beneath the wave of subsequent vivid and inspired writing by others.

It’s notable that Sontag didn’t assemble this book herself. She published sixteen books and four plays, but at no point did she collect these short works. Publishing them together them now has little purpose beyond scholarly completion. Fourteen years after Sontag’s death, this volume will round out the libraries of devoted fans, but it likely won’t win her new readers, and those interested in Sontag’s writing should begin their explorations elsewhere.