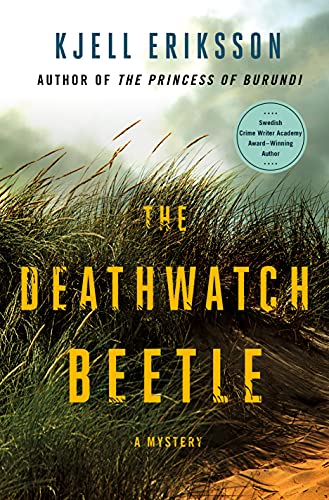 “As more violence enters her tense investigation, and the inner madness of others takes on outer forms, how will Ann choose her own life themes? Does she need to remain lost, to stand aside from love?”

The Deathwatch Beetle is the ninth in Kjell Erickson’s Ann Lindell crime novels, and Lindell has actually left her job as a police inspector. But because she receives a tip that presumed-dead victim Cecilia Karlsson’s been seen alive, four years after the woman’s disappearance from the Swedish island of Gräsö, Ann steps back into investigating the cold case. Her motives are more mixed than that—she’s at a stage when she needs to sort out some things about herself—and maybe that’s a good way to walk among the personalities of this baffling set of crimes, open to emerging secrets and sorrow. And, incidentally, love.

Local consensus on the island is that Cecilia’s friend Casper died in the water, and Cecilia followed suit. When Ann decides to probe Cecilia’s death, she begins with a visit to the young woman’s parents—who are sure Cissi will come back some day—and then visits the men who’d once formed a circle of attention around Cecilia. When she starts with the area’s gossip, Robert, he tells her, “She’s dead. She took Casper’s death hard, unexpectedly hard, and followed him into the water. That’s the way you die here, if you choose to go voluntarily.”

But if she’s dead, why do the questions she left behind keep coming back to life? Ann identifies with disappearing—she did it herself, once—and the strand of her own life that keeps an unexpected life is the former investigator in her. She needs to solve Cecilia’s situation, in hopes of figuring out her own. “She could become a parish constable, move in with Edvard and live the rest of her life on the island. Daydreams, she understood that. The reality looked different.”

This is an elegantly written crime novel, with a sultry pace, translated as if it were high poetry, by Paul Norlen. Insects appear, mate, are eaten or vanish; the ticking of a deathwatch beetle invades the night in a half-hidden cabin; spiders and butterflies take center meaning in scenes. Slow layer by layer, with many shifts of viewpoint, the real story of Cecilia is laid bare—and it’s sordid and chilled.

Ann identified with this missing woman at the start of The Deathwatch Beetle. As more violence enters her tense investigation, and the inner madness of others takes on outer forms, how will Ann choose her own life themes? Does she need to remain lost, to stand aside from love?

Although The Deathwatch Beetle is far less gory than its characters’ souls seem to be, it frames a northern desperation that will feel familiar to readers of both Henning Mankell and Karin Fossum. The book can’t be rushed through; it demands attentive, focused reading.

Eriksson’s moody island of revelation is memorable, and as he did in his earlier award-winning novel, The Princess of Burundi, he paints murder here in layers that correspond to the shells and diversions of the soul. Perhaps we all long to be lost sometimes. Will we agree, however, to be found?