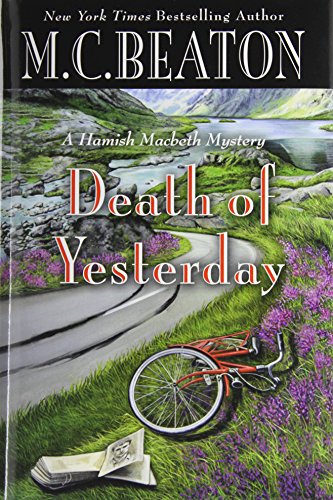 “Hamish Macbeth is that most unusual character, one to whom the reader returns because of his charming flaws. May he never get promoted.”

There are few things you can count on in a Hamish Macbeth mystery. His dog and cat will accompany him on police business; Hamish will fall in lust with an inappropriate woman, realize his mistake, and then work like the dickens to solve the murder. And solve it he will, even if it means realizing his biggest fear: getting promoted and having to move up and out of his highland village of Lochdubh.

Lucky for readers, there are plenty of police willing to take credit for Hamish’s smarts, so even though he solves crimes, he lets them take the credit so he can stay put.

Morag Merrilea is working at the Shopmark Fashions factory during her summer holidays for some extra cash. When the art student complains to Hamish about the theft of her sketchbook in a pub, he doesn’t work too hard. She was drinking, and can’t quite remember what happened, and is snippy when Hamish questions her--obnoxious turns out to be her usual personality. He didn’t like her, but when she disappears he feels guilty, and is driven by guilt to find out what happened.

Hamish’s detective skills are buttressed by his dog-with-a-bone tenacity. He realizes that the good people of Cnothan are collectively hiding facts that could help him. He’s experienced closemouthed villagers before, but the collective inability of getting anyone to chat is like a pebble in his shoe. He haunts the village. Hamish is not above using charm, force or flattery to get information.

And then bodies start piling up.

Because of the wall of silence suspects are hard to come by. Olivia and Charles, the ghastly Palfour tweens from Death of a Kingfisher, suddenly reappear, But why would they care about Morag?

There’s never enough of the usual delightful array of secondary characters. Nessie and Jessie, the elderly Currie twins, always repeats the other’s last words. A more annoying trait is hard to imagine, but the author pulls it off.

Elspeth Grant, whom Hamish has wooed before and lost to the big city, often returns to the highlands as does Priscilla Halburton-Smythe—the girls that always get away.

As bright as Hamish is about the human condition, he is missing the romantic connection gene--something always happens to keep him unmarried. Maybe he will give up his dream of Priscilla; here as usual she doesn’t respond to his clumsy romantic gestures, dismissing him with a curt “that’s enough of that.”

Hamish Macbeth is that most unusual character, one to whom the reader returns because of his charming flaws. May he never get promoted.