A Death on W Street: The Murder of Seth Rich and the Age of Conspiracy 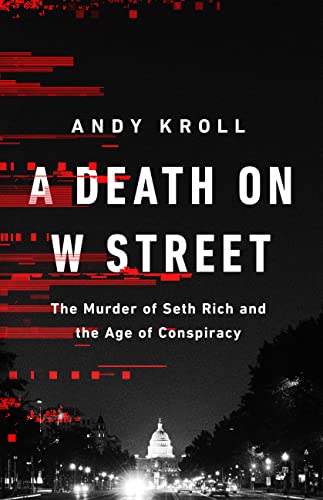 “A Death on W Street is a brutal look at the damage a lie can do to people’s lives as well as to institutions that we, as Americans, revere—or at least should revere.”

It takes a village to raise a conspiracy theory. Or so might the subtitle have been of Andy Kroll’s new book, A Death on W Street: The Murder of Seth Rich and the Age of Conspiracy. In this startling, and sometimes frightening, narrative, Kroll explains how truth has become expendable in today’s highly divided country, sacrificed on the altar of politics.

The saga of Seth Rich’s murder and exploitation illustrates that there is no shortage of the gullible, nor of the unscrupulous who are willing to feed raw meat to that gullibility, solely for political gain, whether merited or not. And if lives and reputations are damaged or destroyed in the process, so be it.

Most people already know the broad strokes of what happened. Seth Rich, a young intern with the Democratic National Committee in the lead-up to the 2016 presidential election, was gunned down on the streets of our nation’s capital in the wee hours of the morning in July of that year. Sadly, there is nothing unusual about that. Street violence is not uncommon across the country.

Then the story took a twist. As Jonathan Swift once wrote: “Falsehood flies, and the Truth comes limping after it; so that when Men come to be undeceive’d, it is too late. . . .” Or, as more commonly paraphrased, and usually attributed (perhaps falsely; how ironic) to Mark Twain, “A lie can travel halfway around the world before the truth puts on its shoes.”

The original lie, here, was that Seth Rich was about to spill the beans on the efforts of Hillary Clinton’s campaign to rig the Democratic primary, and that Clinton was the force behind the killing. As Kroll tells us, that “first wave of speculation about Seth’s murder originated on the far left end of the political spectrum.” Specifically, Bernie Sanders supporters.

As one Sanders supporter posted on Reddit, “I believe Seth Rich was murdered by corrupt politicians for knowing too much information on election fraud.” Under this theory, the author says, Rich had been murdered while actually en route to the FBI (at the unlikely time of 4:19 a.m. according to an “earwitness” who may have heard the gunshots) to report Clinton’s election corruption.

But Sanders supporters were bush-leaguers when compared to the right end of the spectrum, which took a relatively straightforward street crime and gave it a fantastical life of its own. Their ultimate theory posited that Rich was actually a computer genius who had hacked into the computers of the Democratic National Committee, stolen thousands of emails, and transmitted them to Julian Assange and Wikileaks. And that, they said, was why he was killed.

The reason the right became interested in, and anxious to spread, the new lie was because it cast the role of the DNC hack in a different, and exculpatory light for the Trump campaign: If Seth Rich had been the hacker, that meant it wasn’t the Russians. And that meant the Russians weren’t colluding with candidate Donald Trump. Now the need to spread this new lie assumed an even greater political urgency for the right wing.

The author tells us that this behavior of creating and perpetuating lies in the political world is not new. “Americans have indulged in wild speculation and paranoid fantasies about their leaders and their countrymen for as long as the country has existed—and even earlier.”

What is new, however, is the internet. If Mark Twain were alive today, and assuming he was the person who first paraphrased Jonathan Swift, he might say, “A lie can travel all the way around the world, twice, to the moon and back, and into every home in America before the truth can even find its shoes, much less put them on.”

Bu, while the internet was bad enough in spreading the lie, it doesn’t bear sole blame. Far right media sources also picked up the narrative and ran with it. That not only gave oxygen to the theory, it lent credibility to it, at least to a large segment of society.

It is fascinating to watch as author Kroll breaks down, and explains, the role of the media, mainstream or otherwise, in the conspiracy. Persons involved range from Infowars’ Alex Jones (the “first vertically integrated conspiracy theorist”) to Sean Hannity and Fox News.

And even though Fox ultimately backed off its reporting of the theory behind Rich’s death, by then the damage had been done. Hence, the newfound relevance of Swift’s part two of his original statement: “. . . when Men come to be undeceive’d, it is too late. . . .”

The irony of the lie, and its being championed by the right, is that Seth Rich was not only not a genius computer hacker—friends reported he sometimes even locked himself out of his own email account—he was an idealistic young man involved in politics on the opposite side of the political spectrum.

Perhaps more important, though, is the story of the human toll this conspiracy theory, based on a lie, imposed on Seth Rich’s family. Heartbroken by the false image of their son perpetuated by conspiracists, his parents “battled depression and anxiety, wracked with fear and paranoia about the next twist in the conspiracy theories about Seth and their own personal safety.” One therapist attributed it to a form of post-traumatic stress disorder.

Even Seth’s brother, Aaron, was not immune. One attack painted him as being complicit with his brother in the DNC hack, obstructing the murder investigation, and even that he had advance notice of the upcoming “hit” on his brother but that he, for some reason, didn’t try to stop it or even to warn Seth.

As you might expect, multiple litigations ensued, resolved favorably for the Rich family, but that is no recompense for the personal and psychological damage they suffered. And the murder of Seth Rich remains unsolved.

A Death on W Street is a brutal look at the damage a lie can do to people’s lives as well as to institutions that we, as Americans, revere—or at least should revere. The fault lies not only with those who originate and perpetuate the lie, but also those who negligently pass it along—the ones who protest that “I just shared something I read online”—and those who remain silent in the face of the lie.

This reviewer highly recommends A Death on W Street, “the true story of an untrue story.” We all can learn something here about the importance of truth.