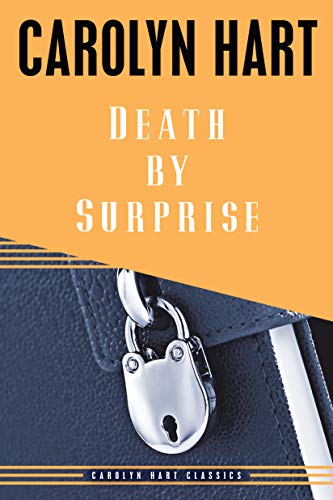 If you read a lot of mysteries, you’ll recognize elements of several subcategories in this reissue of a 1983 Carolyn Hart classic.

Death by Surprise blends noir detective, cozy, and romantic suspense into a mystery as germane today as it was 30 years ago.

The author describes the book so well in her own Introduction that little more need be added:

“As a young teenager, I devoured hard-boiled private eye books . . . [which were] fast-paced, spare, quick. Death by Surprise is as near that genre as I have ever come. K. C. Carlisle, the protagonist, is a young woman lawyer who has good reason never to quite trust anyone. . . . [She] is today’s independent woman and a perfect match for hidden evil in a twisty tale of greed, manipulation, ambiguity, and a client in deadly peril.”

Thus the novel’s tone carries the ghosts of Sam Spade and Philip Marlowe. We get shades of Perry Mason, too.

Mostly it’s a cozy, with an amateur sleuth, off-stage violence, intellectual puzzle solving, and little interaction with the police, who fail to take the main character seriously. This forces her to solve the crime on her own.

K. C. has the interesting problem of being the black sheep of an extremely wealthy family. That wealth is why all the surviving members—including K. C.—are being blackmailed by a fortune hunter, who has somehow learned about every skeleton in the family closet. Even the two gentlemen competing for K. C.’s affections are involved (which is where the romantic suspense comes in).

Despite her estrangement from the family, K. C.’s sense of blood-ties and honor kicks in when her cousin is framed for murdering the blackmailer. She knows he didn’t do it, but the planted evidence is too conclusive to fight without solid real evidence that the police have no need to seek.

K. C. knows many things the police do not, so she is able to wriggle beneath her family’s carapace and privately, discreetly, dig out the truth. Not without great jeopardy to all of them, however.

The narrative zips along true to genre style: fast and spare. This encourages sharp one-line descriptions (e.g., a woman “beautiful in a sleek, high-rise fashion”) but leaves little room for depth. The characters, save for K. C., come across as shallow, and few are likable.

But the puzzle carries the story to a dramatic, late-reveal ending, forming an intelligent, entertaining read typical of Ms. Hart’s body of work.