The Death of Santini: The Story of a Father and His Son 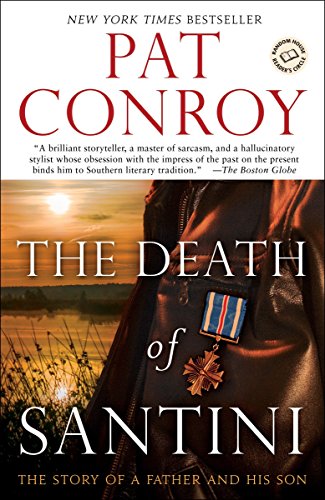 Pat Conroy’s The Death of Santini—a farewell to the abusive father he both hated and loved—was never going to be an easy read. What’s surprising for those familiar with his work is that the author chose to use the transparency of memoir as its vehicle, rather than the opaque fictional veneer with which he previously cloaked his bestselling tales about his tempestuous family.

The family is the overwhelming theme of his life, what marks him, and what made him.

They constitute perhaps his personal failure as well as his huge commercial success.

“Only rarely have I drifted far from the bed where I was conceived,” he acknowledges.
“It is both the wound and foundation of my work.”

This book, he declares in the prologue, is the telling of his parents’ “flawed, wanton” love story.
“I shall try to write the truth of it as best I can. I’d like to be rid of it forever, because it’s hunted me down like some foul-breathed hyena since childhood.”

He and his six brothers and sisters all suffered the emotional scars of their disturbing upbringing: “Five of us would try to kill ourselves before the age of forty. My brother Tom would succeed in a most spectacular fashion.”

Pat Conroy took their suffering and exposed it to the world in such memorable novels as The Great Santini, in which readers first meet his fighter pilot father in the form of the barely fictional, brutal Bull Meecham; The Lords of Discipline, in which a group of “bloodbrother” cadets endure a tough military institute like the one attended by the author; and in the tragic The Prince of Tides.

Publication of The Great Santini in 1976 opened floodgates of chaos and dissent among his family members. His parents’ divorce was, in all likelihood, precipitated by the novel; indeed, his mother apparently presented a copy to the judge as evidence in her divorce proceedings.

In a way that book’s release marked a change for the better in Mr. Conroy’s father, who took to accompanying him on book-signing tours—bizarre, belated father-son bonding sessions—preening at the fame the story gave him, all the while denouncing it as a pack of lies to anyone who would listen.

Not just a literary Last Post for his indelible father, The Death of Santini examines in painful detail the traumas and occasional tender moments of a family at war.

As compelling as a car wreck, it’s impossible to look away, even though the catalogue of misery sometimes threatens to overwhelm.