A Death in San Pietro: The Untold Story of Ernie Pyle, John Huston, and the Fight for Purple Heart Valley 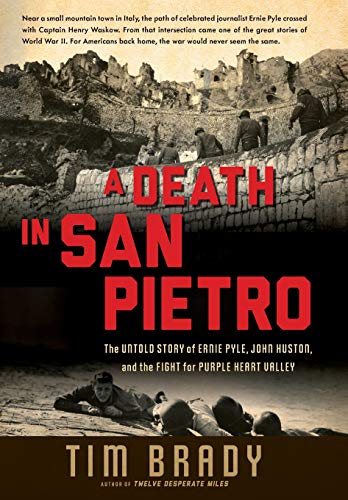 “A Death in San Pietro is a blood and mud soldier’s eye view of a pointless messy slaughter than too often defines war.”

The battle for San Pietro in the “Purple Heart Valley” (Liri Valley) of Italy in December 1943 merits no more attention than hundreds of other battles fought by United States troops across Europe in World War II except for correspondent Ernie Pyle’s famous essay on the death of Capt. Henry T. Waskow of the Texas Division and John Huston’s documentary San Pietro (1945).

Neither of these efforts, although at the time widely acclaimed, added in any significant way to the already substantial reputation of either man. The terrible sufferings of the much abused but very brave men of the Thirty-sixth Texas “T-patch” Division is also described in detail in this book.

Intertwining these three stories makes for an engrossing read but especially for those wanting to know about the American experience in World War II from the bottom up. The author writes in the common style made popular in such works as Fenster’s The Case of Abraham Lincoln that keeps the book a page turner, even if the prose sometimes seems unsophisticated. If Ernie Pyle had lived to write a work on the San Pietro battles, however, he would have done it in a similar style. The obvious effort made to accurately tell this story gives this book credibility.

A Death in San Pietro is a blood and mud soldier’s eye view of a pointless messy slaughter than too often defines war. It comes with many pleasant surprises such as getting to know something about the personally troubled Pyle who earned so much adoration for his battlefield writing. How President Roosevelt and the War Department wanted the American people to see the sacrifices made by the soldiers through films that were honest and real makes for another theme.

The book also explains why the Thirty-sixth Division suffered such phenomenally high casualty rates. These Americans, of whom Texans became a decreasing percentage as the fighting progressed, were asked to do too much with too little by generals like Geoffrey Keyes, Mark Clark, and Dwight Eisenhower. The higher in rank in the United States Army of World War II, too often the more incompetent and out of touch the leadership.

For achieving success despite the obstacles, Maj. Gen. Fred Livingood Walker, a highly decorated veteran of campaigns in Europe, the Philippines, China, and Mexico, and his staff of the Thirty-sixth, were essentially sacked as scapegoats for poor decisions made by the higher ups.

Rick Atkinson, in his excellent trilogy on the United States Army in North Africa and Europe, makes the same points but he does so for the whole theater. As he points out, as the last keepers of the memories of the star studied gods of World War II pass on, more credible histories like A Death in San Pietro will give the American military and citizens something tangible to learn from the World War II experience.

No doubt the white and Hispanic men and boys from isolated Texas towns who remained in the division wished that they could have left, too. John Huston used these survivors in his reenactment of the battles, what for many of these soldiers must have been cathartic. The author of A Death in San Pietro did extensive research into what remains of the documentary records of Captain Waskow, his comrades, and their families. The latter, as with other Americans with family members in the war, no doubt drew solace from the essay on the captain’s death and how his men felt about him. Pyle, the author, would also famously not survive the war.

The three different tracts in A Death in San Pietro move along together but, as is common for this type of book, never really come to any single common point. They, like the war, just move on.