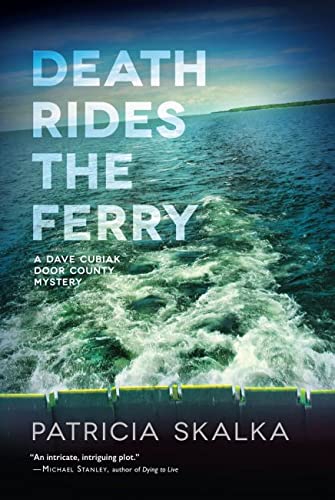 When you’re a cop, it’s darn hard to get a real day off. Dave Cubiak, Door County sheriff way up on Lake Michigan in Wisconsin, thinks he finally can enjoy himself on a perfect summer afternoon. All he has to do, and wants to do, is watch a music festival, watch the film crew documenting the festival, and watch his wife Cate, who’s photographing the festival.

While wandering around among these attractions, he’s also watching a woman who catches his eye because something about her . . . isn’t right. Hours later, her dead body arrives on the ferry between islands off the end of the Door County peninsula.

Thus Dave is drawn into a complex case involving a rare historic instrument—a viol de gamba from the 16th century—stolen at the previous festival 40 years ago and never recovered. Neither Dave nor most readers are familiar with this instrument or its backstory, which forms the core of the book; and both he and we learn a heck of a lot about ancient stringed instruments through Dave’s investigation into the crime. Multiple crimes, actually.

We also gain insight into how musicians can become obsessed with instruments and enrich or destroy their lives because of them.

For Dave, it’s a police matter. Solving the associated crimes takes him from “an unknown victim, a suspicious death, and no leads” to being kidnapped and abandoned on a remote island in the deep northern wilderness. Along the way, he struggles with personal issues: becoming a father again at 49 after tragically losing his first wife and daughter. His current wife Cate’s own tragic history with miscarriages makes him fear for her health, as well. “You can’t be pregnant, he thought. You can’t take that chance. You can’t because the doctor told you not to. You can’t because if the baby dies, it will destroy you.”

So on top of the escalating problems with the case of the missing “yellow viol,” Dave also suffers escalating anxieties that rattle his normal confidence and competence. Still he soldiers on, his years of experience and self-discipline keeping him on top of the investigation—until it explodes into something more complicated than anyone can handle and puts him, Cate, and their unborn child in harm’s way.

The author handles Dave’s combined crises deftly and calmly, making for a smooth yet page-turning read. This is book four of the Door County mystery series, and like Dave the author has gained her own confidence and competence. She brings the region alive for readers with a you-are-there verisimilitude that justifies the awards and accolades she has won for her fiction. Both Dave and the supporting characters in this series are a plausible mix of strong and weak, understandably and forgivably and admirably human.

Here’s to hoping book five keeps up the trend.