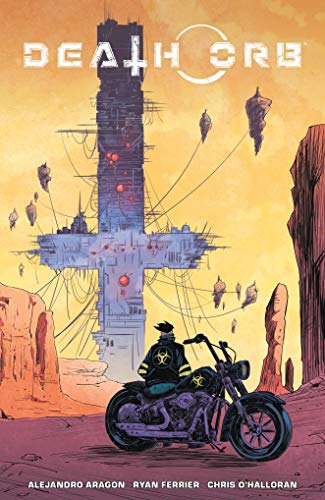 Death Orb is a visually ambitious graphic novel. It depicts a ruined Earth, years past a nuclear holocaust. Buildings are crumbled, with vines of hanging wires choking them. Hi-tech machines and floating stations of science and surveillance are about. Death cubes swoop through the skies to hunt enemies of the state. Above it all the floats the Death Orb itself, ready to be summoned by its controller to slam into Earth, ending its misery and wiping it of clean human imperfection. It’s not a neighborhood into which one would voluntarily move.

Earth, and particularly North America, is inhabited by uniquely crafted citizens. There are humans both full bodied and reassembled from the spare parts of war. Both types of humans are heavily damaged goods, prone to violence. There are robots and mystics.

As to the latter, one is a 12-year-old girl named Pilot. She seems the only child on Earth. She is deemed an enemy of the state and hopes to escape death and eternal damnation as such. On the side, she controls a mentally unstable and lethal ninja who gives voice to lines of haiku while he slices and dices numerous bounty hunters seeking to take the life of his young mistress.

A second mystic is the head of a recently decapitated, eyeless old man. He/it is in a sack strapped to the back of the principal hero’s motorcycle. Pilot ultimately loses the sack and its sooth-saying head just as the two of them have started seeing, eye to “eye.” The timing to misplace this unusual ally could not have been worse.

The storylines are very complex, but are well carried by the power of the graphics. The many subplots aside, the main tale centers on a nameless hero, known to others simply as the Rider. Astride his motorcycle, he slays his way along the countryside. He quest is to regain his pregnant wife, kidnapped by the primary villain known as the Father. She is being held in parts unknown, for reasons unknown.

The Father is the religious and political head of what little operating civilization remains following the nuclear war. He controls the minds and movements of the masses as he pursues a larger, and clearly evil, unstated goal. He has a praetorian guard called the Lords, which he only partially controls. The Lords mostly demonize the masses at the will of the Father. At least once though, the house of Lords suffers a lapse of faith and attempts to sacrifice the Father. Father and the Lords, however, are firmly united in the violent elimination of the Rider and those who befriend him.

Many dark-souled henchmen are sent forth to dispatch the Rider and his posse. The most powerful bounty hunter is the Black Shark. His image recalls that of Hannibal Lecter on a very bad hair day. By novel’s end, Rider, Black Shark and the Father are locked in wicked combat, most brutal. All the why’s, how’s and what’s of the storylines are satisfactorily answered in this trial by combat.

There is, however, weakness to the power of Death Orb. Dialogue is clipped, but punctuated with useless obscenities. Their frequent use distracts from the story and its characters. Dialogue is also often trite. Characters “watch and have each other’s backs forever” far too often. In one scene, a hero is on what seems to be a solo kamikaze run against an installation of evil. Along the way, he sings the 1970s John Denver song “Country Roads.” Who could have imagined that tune spanning the centuries?

The very last page of the novel leaves the reader with a sense of disbelief and feeling of “Did that really just happen?” Without being a plot spoiler, the surviving cast of Death Orb, hero and villain all, gather on paper to sing their cosmic version of “All You Need Is Love.” And so until next time. . . .