Death of the Master 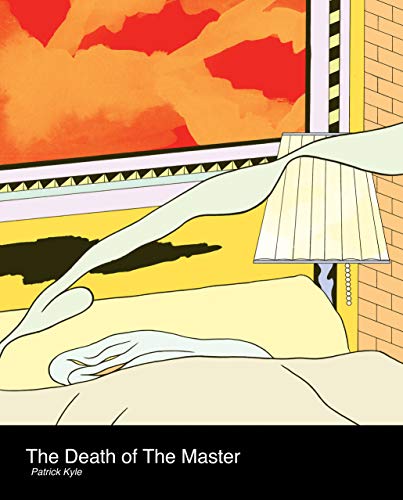 Patrick Kyle’s graphic novels are enigmatic. His artwork is abstract and deeply resistant to simple representation, and his stories are surreal. Within this body of work, Death of the Master is actually relatively accessible: the story of the death of a charismatic cultural leader and its aftermath.

Workers engaged in impenetrable labor (Are they moving marbles with chopsticks? Are they amassing fuel for a death machine?) are interrupted by a shrieking loudspeaker: “Attention staff: Our worst fear has been realized today. Cease production immediately!! Stand by for further instructions!!”

Officialdom’s hyperbolic language doesn’t translate to the masses. A worker, ceasing production, wonders, “Our worst fear? What could that even be? I hope I’m not being fired.” That contrast is the book’s heart: the disjunction between “era-defining” moments and individual experience; balanced with the absurdity of imagining individualism in the midst of capitalism.

The Master himself is absurd, a mushroom-like troll who delivers his mystical yet authoritarian proclamations through a megaphone: “Citizens!! It is I, the Master!! Listen to me!! . . . Though my body dies, molecules are forever! My particles will remain, redistributed throughout the atmosphere!! When you breathe, you will breathe me!! When you drink, you will drink me!! I am not really gone! I am in you!! I am in you, you are me and I am you! Don’t ever forget: disobedience is sin!”

The Master dies, and his closest disciple begins a series of strange rituals of personal remembrance, shaping models of him from wax and sleeping in his bed. Meanwhile, workers question whether the Master can possibly be dead, given his power and infallibility. They run riot and break through walls, and wild shapes seep between frames, spreading dissent through the populace, until it’s reassured that the Master is not dead, he cannot die; still, all people should plan to attend his funeral.

The book is satirical, though far from complex. There are obvious totalitarian parallels, particularly to Soviet-era strongmen, or even to Maoist China, but the balance of charisma and absurd labor seems perpetually on the brink of creating some deeper, more complex insight that doesn’t arrive. Precarious employment is only briefly gestured to; beyond that point, there doesn’t seem to be a significant parallel with any western culture.

Within the satire, absurdity ultimately reigns. Two workers, discovering a message suggesting the power structure is crumbling, reject not just that idea, but perception and knowledge entirely: “‘I speak only from the observation of reality.’ ‘Have you considered that the passage of time might have affected your observations from yesterday today?’ ‘Haven’t you heard? Time is an illusion!!’” The battered speaker then bursts into an abstract shape and vanishes.

The charm of Patrick Kyle’s work is ultimately in its resistance to interpretation. Graphic novels are usually valued for their accessibility, but Kyle creates volumes that bewilder, resisting the observer at every turn. Death of the Master’s nihilism refuses even itself, smiling in its conclusion and murmuring, “I’m actually fine,” from its final page.