A Death in Live Oak: A Jack Swyteck Novel 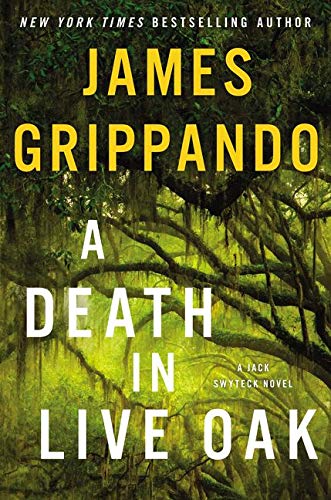 James Grippando won the prestigious 2017 Harper Lee Prize for excellence in legal fiction for Gone Again, his 12th Jack Swyteck thriller, and A Death in Live Oak is the 14th offering in the series. While it’s always tough to follow up on work that has attracted the attention of prize-awarding juries, Live Oak is a creditable attempt to meet the high bar Grippando has set for himself.

Set on the campus of the University of Florida and in the murky swamps of the Suwannee River, Grippando’s story jumps straight from today’s headlines. When the body of Jamal Cousin, president of a black university fraternity, is found in the swampland under circumstances that suggest a racially-motivated lynching, attorney Jack Swyteck is called in to defend the president of a white fraternity who is accused of the brutal, hate-inspired murder.

As political and racial tensions quickly boil over, Jack’s investigation soon suggests that Jamal’s murder bears a disturbing resemblance to another local lynching that occurred in the Jim Crow days of 1944. Will the increasingly obvious parallels enable Jack to solve the mystery in time to absolve his client of guilt?

James Grippando is a former trial lawyer who has published 26 thrillers, and by now he’s honed his skills to the point where a reader can pick up A Death in Live Oak without having read anything else by the author and not be disappointed.

The author tells a very good story. His primary plot is close enough to current events to engender the same kind of stress and tension we feel watching similar occurrences unfold on CNN, and the secondary plot, the very sad story of a lynching that took place nearly 75 years ago, provides effective counterpoint. The fact that the lynching of 15-year-old Willie James Howard in Live Oak, Florida, actually did occur in 1944, as Grippando explains in his Author’s Note at the end of the novel, makes it even more poignant.

Grippando’s characters are also believable and well drawn. One of the challenges faced by bestselling authors with longstanding series is finding a way to provide background information on their main characters without prolonged repetition of material seasoned readers will find boring and unnecessary, or by skimping so much that new readers have no idea who this guy really is or why he does what he does. Grippando tells us just enough about Jack’s background that we have a good sense of his motivations and past experiences without slowing down the pace by retelling the backstory ad infinitum.

His secondary characters are also satisfactory. A plot such as this one presents many possible pitfalls for stereotypical, two-dimensional black-versus-white portrayals, but Grippando steers his way through them to a reasonably realistic, three-dimensional cast. While attorney Leroy Highsmith is something of an exception, being a little too over-the-top, the other secondary characters and their divergent interests work well in the novel.

A Death in Live Oak is a legal thriller that reads very quickly and will hold your attention from beginning to end. The verdict from experienced fans will be that Live Oak measures up as a worthy addition to the Jack Swytek series, and it will send new readers back to The Pardon (1995) to get a full sense of what James Grippando can offer to fans of legal thrillers.