Death by His Grace (A Darko Dawson Mystery) 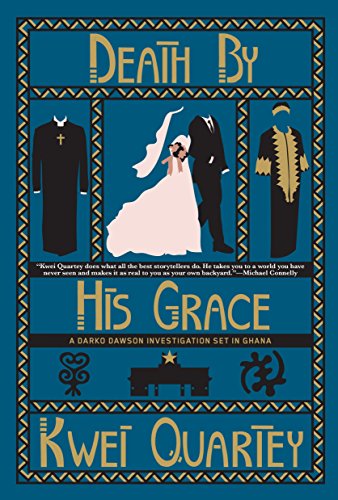 Ghana is not the first country that comes to mind when one thinks of crime fiction with an international setting. Readers not familiar with this West African nation, however, might be surprised to learn that Accra, the capital city, is home to more than two million people. As such, it’s more than adequate as the location of Kwei Quartey’s fifth Darko Dawson crime novel, Death by His Grace.

Murder once again touches Darko’s personal life when his wife’s cousin, Katherine Yeboah, is brutally butchered the night before she is to move out of her home on the orders of her estranged husband Solomon. The couple are divorcing in part because she cannot bear children, and in part because his mother and sister believe Katherine is a witch who cast a spell on Solomon.

As a chief inspector with the Ghana Police Service, Darko is conflicted, having to assuming the lead in an investigation that requires him to question not only Katherine’s family but his own wife as well.

Further complicating matters is the family’s deep devotion to a powerful religious leader, Bishop Howard-Mills, who is implicated when witnesses interviewed by Darko suggest the bishop was conducting a clandestine affair with the victim. Darko experiences significant pushback as he probes deeper into the bishop’s conduct, not only from his own wife and mother-in-law but also from the bishop’s closest aides, whom Darko also views as possible suspects.

Born and raised in Ghana, Kwei Quartey grew up in a home filled with books. His parents were both lecturers at the University of Ghana, and from an early age he knew he wanted to be a writer. As a teenager his interest in science drew him to medical school, but when his father passed away his mother decided to move back to her native United States, where Quartey gained admission to Howard University College of Medicine in Washington, D.C., to continue his studies.

Now a successful physician in Pasadena, California, Quartey finds time early in the morning each day before setting off to work to write the Darko Dawson crime novels.

Based in the United States, Quartey has an understanding of the expectations of North American and European crime fiction readers, and he writes accordingly. While his novels alternate between rural and urban Ghana, his stories contain the grit, immediacy, and well-constructed mysteries to satisfy crime novel fans everywhere.

At the same time, his novels successfully capture the atmosphere and personality of Ghana. While the Ghana Police Service slowly computerizes its records, Darko and everyone else rely on cellphones, laptops, and Internet access to the same degree as if they were walking the streets of Pasadena. On the other hand, Darko must hope that during key moments of his investigation Accra is not submitted to another dumsor, the unexpected power outages that strike Ghana with disquieting frequency.

Readers experience the food, clothing, languages, and the sharp division between the living conditions of the rich and poor that characterize the nation. Darko also feels constant pressure from the strong role that religion plays in Ghanaian life.

In Death by His Grace he must not only contend with the influence exerted by Christianity, to which more than 70 percent of Ghanaians are affiliated, but also traditional religious beliefs, which include witchcraft, shamanism, and evil spirits.

Darko Dawson is a likeable protagonist. In his debut appearance in Wife of the Gods (2009) he was rough and unformed, addicted to weed, and bad-tempered, but his character has smoothed out marginally now that we’ve reached his fifth novel. The only false note is his synesthesia which, when someone tells a lie and their vocal quality changes, Darko detects as a sensation in his left palm. The result is an organic lie detector that crops up at key points in the story like some kind of Spidey-Sense. It comes off as contrived, implausible, and not at all necessary to the success of the story.

Nevertheless, Death by His Grace is an entertaining, engaging crime novel, and the Darko Dawson series is recommended to all readers who enjoy a satisfying, uncomplicated story with a different setting. Kudos to Soho Crime for bringing readers yet another successful example of “atmospheric crime fiction set all over the world.”