Death Comes to Dartmoor: A Merriweather and Royston Mystery 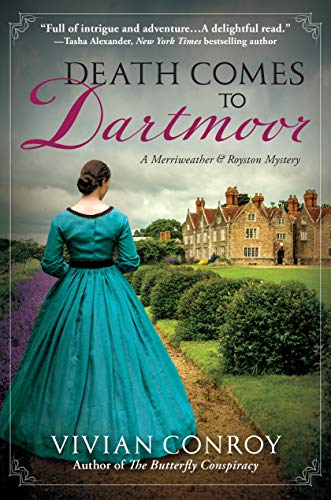 Well-researched historical fiction takes readers to new (old) places and brings the time and people alive. That is, if the story works as a story. Else it’s just a creative narrative featuring facts and details.

Death Comes to Dartmoor is such a hodgepodge. As an amateur-sleuth mystery set in Victorian-era England, it fails to cohere. Yes, there is a clever murder plot; yes, there are endearing, quirky characters; and yes, the elements of time and place, especially the social class divisions and lack of forensic science, are true to the period.

But the novel as a whole feels like a jumble of interesting oddments that the author stretched hard to tie together. The main characters do little more than rush around and speculate, mainly because they have so little to work with in solving the mystery.

Actually, there are multiple mysteries going on at the same time: a strangled housemaid, an abnormally high number of shipwrecks against the local shore, reports of strange creatures roaming the moors and killing people, a local naturalist going mad, and the locations of buried treasure. Underneath it all is the heroine’s quest to learn anything, anything at all, about the mystery of her birth.

This character, Merula Merriweather, was introduced in the first volume of the series, The Butterfly Conspiracy, along with her companion, Lord Raven Royston. A romance between them seems inevitable, but so far it has been advancing in tortoise-slow steps.

Because the first book was fresh and well executed, one would expect the second to follow suit. Alas, not. While The Butterfly Conspiracy featured Merula’s struggle against scientific pursuits being closed to women, Death Comes to Dartmoor leaves that behind except for passing references. Here Merula acts more like a damsel in distress.

Her character development isn’t helped by a plot that feels pushed, secondary characters who behave like stereotypes, and prose that repeats clichés, such as two “shivers down her spine” and one “chill down her back” inside 24 pages. More shivers occur throughout the book in different phrasing. It gets to be irksome after a while.

As well, during an era when people were concerned about, sometimes obsessed with, propriety and position (Merula herself was taught “always to avoid social disgrace and embarrassment for other people”), it seems odd how often she and Raven accost strangers with direct personal questions or accusations about sensitive situations. More jangling is how aggressively insulting some of the responses are from people trained to the same etiquette standard as Merula.

One aspect that rings true is Raven’s remark, “Where there are people who believe in something, there are also always people who want to keep those beliefs alive for their own gain.”

In this case it’s angry, ignorant villagers having their grievances and superstitions inflamed by a rich newcomer with a shady agenda. There’s also an avaricious tradesman who takes advantage of naive girls. These men prove to be part of the multiple-mixed-up mysteries, but neither is a murderer. Merula and Raven must press on through suspect after suspect to find out who-done-it. Readers familiar with common mystery tropes might figure it out first.

A clue to why this story doesn’t quite work is found in the author’s note in the backmatter. She describes the very salad bowl that inspired her ideas. Give her plus points for putting them together with imagination and zest, minus points for being too cavalier about it. A round of hard-nose editing would have made things more plausible.

As it stands, this book in the series should appeal to readers who enjoy a light intrigue tinged with danger, set in an earlier time. Let us hope that Merula and Raven have a more coherent adventure in the next volume, and advance more speedily on their romantic path.