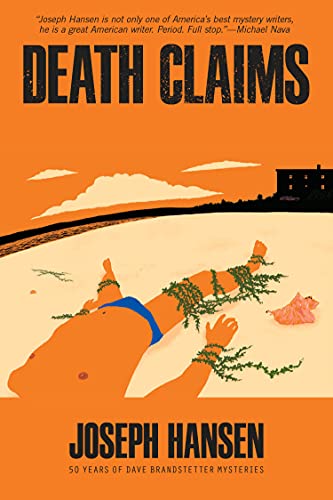 “The suspense of both the investigation and Brandstetter’s home life drives Death Claims as an elegant and compelling page-turner.”

Death Claims is the second book in the Syndicate Books re-issue of Joseph Hansen’s 12 Dave Brandstetter crime novels, with this title releasing at the same time as the first, Fadeout. Originally published in 1973, Death Claims features Dave Brandstetter, a Californian “death investigator” for an insurance company. Its release, in softcover, will be a good gift for those just discovering Hansen through the new publications.

But the softcover form also emphasizes the book’s original emergence, as “private eye” fiction on the edge of hard-boiled, and as almost scandalous for its time period, when homosexuality was both illegal and frankly labeled disgusting in public—a discreet paperback tucked in a pocket would be ideal at the time.

Death Claims turns the category of “beach reading” on its head, as the death Brandstetter must investigate for his employer takes place at a swimming beach at night. There are plenty of reasons to suspect the death might not be natural—the dead man, a scarred burn victim in ill health, was about to change the beneficiary on his life insurance, and the people around him smolder with jealousies and insecurities.

Much of the emotion among those potential suspects involves money—but perhaps an equal amount reflects their passions, whether of love or soul-burning desire. As Brandstetter pulls back the illusions among them, he meets threats with a calm that’s not matched by what’s taking place in his personal life, where he’s made a mess of trying to love the former lover of his own long-time lover—yes, this crime novel is dedicated to the confusions of emotion and commitment. And so is the investigator.

Hansen’s neat and compelling plotting rides on his pithy descriptions, whether of a victim or suspect, or of a location: “The building was tall, massive, blind as a fort. Old eucalyptus towered around it, peeling tattered brown bark, their shadows ragged blue on the whitewashed walls. A barn door fronted the mill. Posters were tacked to it photos curling off them, actors’ smiles bright, scowls deep. . . . El Molino Stage. Churchly. A bent finger of black iron poked through a slot in the door. [Brandstetter] rattled it up and walked in.”

For a long portion of this crime novel, it looks like drugs are at the root of the killing. Brandstetter tells the victim’s ex-wife, “You were right. John Oates was an addict. I’m in your debt for telling me. He was getting morphine from a hospital orderly. What I need to know now is where the cash came from to pay for it.”

But as with all the groundbreaking Dave Brandstetter crime novels, there are threads and links that cling to the perilous nature of homosexual love at that time—its risky nature, its edge of the forbidden, and its social labels for immorality. When Brandstetter catches the scent of possible blackmail, the only surprise is that it’s more widespread than just focusing on people’s bedrooms.

The narrative is smooth, the plot twists nicely balanced between unexpected and perfect fits, and the suspense of both the investigation and Brandstetter’s home life drives Death Claims as an elegant and compelling page-turner. Emotionally, the book is a good match for Michael Connelly readers, and a great re-introduction of a classic.