Death on Blackheath: A Charlotte and Thomas Pitt 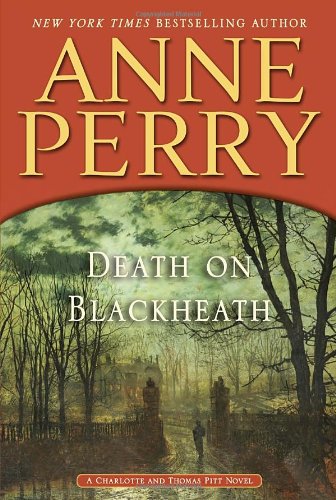 “Anne Perry writes with great assurance about these Victorians stuck in their notions of how to behave, how desperate they are to maintain their superiority—and how little all that will mean if England falls.”

Thomas Pitt’s job as head of Special Branch is to keep Great Britain safe from spies, sort of an early James Bond, without the gadgets. He has graduated from “ordinary” crimes to those involving queen and country. But human nature being what it is, Pitt sees plenty of banal behavior among those who are involved with the country’s defense.

In this case he is called to what may be no crime at all—some shards of glass, blood and hair outside a house—but this is the home of naval weapons inventor Dudley Kynaston. His wife’s lady maid is missing, but nothing else, so perhaps it’s a sad affair, but is it a matter for Special Branch?

The problem with spymasters is that no one wants to talk. So while Pitt knows that Kynaston is important he has to tread carefully because it’s not clear how important he may be. It goes without saying that there can be no scandal, but if Kynaston is a bad guy, how does Pitt deal with that?

In other words how bad is bad?

This is a great subject for Perry since her strength is describing the Victorians talents to mouth platitudes in Society, without committing to anything.

Plausible deniability was elevated to an art form under Queen Victoria.

But the man Pitt trusts most, his underling Stoker, agrees with Pitt that something is not right. There’s no body, and no one has seen the maid, in Blackheath or London. The case is put on the back burner, but Stoker marches doggedly along, trying to determine what happened.

To make matters worse, Pitt’s brother-in-law Jack Radley has been offered a position working with Kynaston. It would be a coup for Jack, but should he work for someone who remains under a cloud? And suspicion of what, exactly?

When a mutilated body that may match the missing maid shows up near Kynaston’s home, the pressure on Pitt grows. Since there’s no CSI magic, the tantalizing question of whether or not this is indeed the maid or whether someone is out to frame the naval inventor needs to be solved.

Anne Perry writes with great assurance about these Victorians stuck in their notions of how to behave, how desperate they are to maintain their superiority—and how little all that will mean if England falls.