Death by the Bay (A Dave Cubiak Door County Mystery) 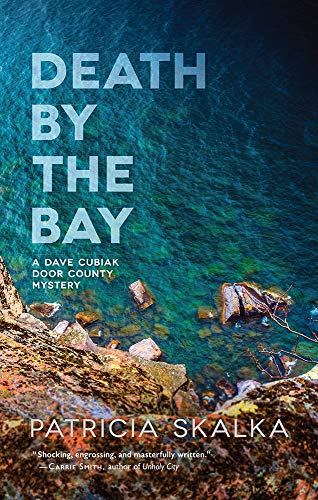 The appeal of this series is its utter straightforwardness. No “stylin’.” Sheriff Dave Cubiak goes about his business, is confronted by a crime, and steps right in to solve it.

In this case he’s waiting to meet a friend for lunch in a lodge where a medical conference is also taking place. Screams draw him to where a key speaker at the conference has dropped dead onstage.

While Cubiak is processing the situation, screams from another direction draw him to that corner of the conference, where a staff member has been shocked into hysteria by a photograph of her long-lost brother shown in somebody’s presentation.

The disparate events quickly begin to overlap. And thus launches a complex story about medical malpractice at its worst.

It doesn’t seem that way to start. The story opens with a scenario most of us have experienced: expecting a pal with a history of promptness who this time is late in arriving. Late enough to start worrying. Late enough to move past considering traffic jams and last-minute phone calls to fearing traffic accidents and more outrageous mishaps of the kind we read about in the news.

That proves to be a red herring, but the anxiety sets the emotional stage for the rest of the book. This volume in the series differs from its four predecessors in that it’s inspired by a real event. The author spells out the details in her acknowledgments at the back of the novel.

The plot centers around disabled children being kidnapped and used for scientific experiments. Readers will be shocked to learn how late in history laws were enacted against this practice. The perpetrators’ motives were initially honorable—seeking cures for horrible diseases and genetic defects—but their methods were criminal, creating tragedies instead of miracles.

Sheriff Cubiak finds himself sucked into cold cases and current schemes to continue the heinous practice, all tied to the personnel running the conference. He is motivated not only by his duty but also by moral outrage, which pushes him to act above and beyond.

This is not to say he charges around like a superhero. Instead he is subtle and careful, resourceful and clever. In a few instances, he learns more than the reader does and whips out his knowledge at crucial moments. The only thing that keeps this from being annoying is that the author shows him initiating the inquiries that lead to his knowledge. Since some of the follow through occurs in the background, readers might be as surprised as the other characters are when he comes out knowing all that he knows at the right time.

For the rest, we ride with him through the investigation. We don’t get as much Door County atmosphere as in previous volumes, which is disappointing for those attracted to the series by its place-centeredness. However, the intensity, details, and passion for the subject presented in this story make up for any hiccups, and continue to build Dave Cubiak as a character to keep following.