The Death and Life of the Single-Family House: Lessons from Vancouver on Building a Livable City (Urban Life, Landscape and Policy) 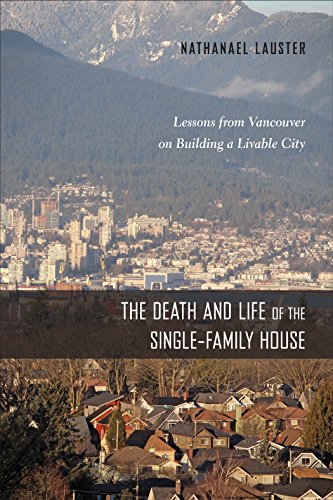 “The Death and Life of the Single Family House is an important contribution to urban studies . . .”

“A man’s house is his castle” (James Otis, arguing before the Superior Court of Massachusetts in 1761)

What comes to mind when we think of home? Slippers by the fireplace, a comfy couch, savory smells wafting from the kitchen, children’s laughter, a welcoming dog at the front door which you close behind you to ensure a private refuge from the outside world?

Many of us have been conditioned by our cultural norms to equate these mental images with a separate structure under its own peaked roof, standing on an individual plot of land, with yards acting as moats buffering the residential unit from public intrusions. That is, home means the single-family detached house as might be signified by a child’s crude drawing of a square box with a door and windows topped by a triangle boasting a smoking chimney, bordered by a picket fence.

In our culture, becoming a successful adult as measured by a good job, a life partner, and starting a family, traditionally was the cue to buy a house of your own, probably in a leafy suburb like your parents and grandparents. But in this era of globalization, increasing migration and diversity, urban sprawl, and escalating property values, many urbanites are challenged to make themselves at home in the city without the familiar security blanket of the house.

In The Death and Life of the Single-Family House: Lessons from Vancouver on Building a Livable City Sociologist Nathanael Lauster examines how one Canadian city has undergone a dramatic transformation to curb sprawl.

Vancouver today is regarded as one of the most livable cities in the world while becoming an international model for sustainability. Single-family homes in this city are now a dying breed as most people live in the various low-rise and high-rise urban alternatives throughout the metropolitan area.

“Indeed, Vancouver has rebranded itself as the world’s ‘Greenest City,’ and its downtown planning principles have been spread around the globe as Vancouverism.”

Central to this success story has been the turn away from the single-family detached house, which owes much to regulatory transformations that have enabled the city to renovate, build over and build around the house, while retaining a sizeable Great House Reserve around the urban core. Vancouver has gone from a young city of pioneer cottages to a city of condos and duplexes in just a few decades.

The rapid residential densification derives in large part from an unprecedented real estate boom such that the middle classes today have slim prospects of ever owning a house of their own. Metro Vancouver has become such an attractive destination for investor-class immigrants that the benchmark price of a detached house now tops a million dollars and is more than double that on the desirable west side.

In a city where effectively every owner of a house is now a millionaire, newcomers, young families starting out, singles and those in lower income brackets are compelled to rethink the cultural importance of the house and acquire new living habits without sacrificing quality of life.

For Lauster, densification is key to urban sustainability. Not only does it slow the proliferation of suburban sprawl and the energy inefficiencies and pollutants entailed therein, but also it allows more residents to share the cultural diversity, amenities and stimuli of the urban core freed from the burdens of exhausting commutes, social isolation, and house maintenance chores.

In the first half of the book, Lauster focuses on the history of how cities created so much habitat for houses and protects it via zoning restrictions. The second half switches to a sociocultural lens to uncover the kind of habitat that houses create for people in big cities today.

He begins by defining a house “as a concrete thing, a fuzzy cultural idea, a market commodity, and a regulatory creature. I focus on laying out this last and generally least familiar form of the house . . . how the house was written into local bylaws all across the continent. From there I argue that once the regulatory creature went to work, it structured much that followed. Culturally, people generally came to understand the house as a flexible sort of package deal associated with family, a concept pulling together plentiful space, ownership, and a yard.”

As a young metropolis, only a little more than a century removed from its brash frontier past, Vancouver embraced town planning early on, initiating the formation of the Great House Reserve which privileged the construction of the detached house outside the older urban core.

The outer boundaries of this protected house area were reinforced by physical geographic barriers—the Salish Sea to the west, a mountain chain to the north, inlets and rivers cleaving the metropolitan area and the border with the United States to the south. Inland, the establishment of an Agricultural Land Reserve prevented the Great House Reserve from gobbling up all the farmlands.

During the 1960s the character of the region began to change in dramatic ways. The increasingly multicultural city rejected the urban renewal bulldozer and freeway approach to downtown redevelopment and opted instead to open up the core to a mix of higher density housing including high-rise apartment towers and condominium complexes.

Decaying industrial areas have been redeveloped into foot-friendly neighborhoods, such as the Gastown historic core and the False Creek waterfront which now boasts a vibrant public market and recreational amenities as well as mixed residential development including co-operative housing.

The second half of the book populates this redrawn urban landscape by interviewing contemporary residents about what they think about the death of the single-family house as a way of life?

Has Vancouver become uninhabitable for everyone except the ridiculously wealthy? How hard is it for people to change ingrained lifestyles? What distinguishes a lifestyle from a living standard? How do people adjust to small living spaces? What are the side effects of these new proxemics on domestic relationships? What about personal security in mixed neighborhoods?

Lauster concludes: “Ultimately, it seems, Vancouver provides the cultural scaffolding for many people to reinterpret their lives as success stories even when they do not own houses.”

A number of his respondents reject the single-family house in favor of alternative visions of the good life. Townhouses, apartments, and the like not only are more affordable but require far less time and energy in maintenance. Furthermore, they turn out to be surprisingly good places to raise children.

“Urban living provides excitement and promotes adaptability. It permits access to more communal space, and encourages people to more fully share and engage with others as they occupy the diverse landscapes around them.”

In sum, Vancouver offers valuable lessons about how to diversify cities. But much more needs to be done to further open up the Great House Reserve beyond the core to alternative residential models and to better promote social justice. More flexibility in zoning and building bylaws and more creativity in city building is essential to channel market forces and make cities inhabitable for all in truly sustainable fashion.

The Death and Life of the Single Family House is an important contribution to urban studies particularly in terms of its head-on challenge to our “house habit” and the cognitive dissonance in which this is embedded. In this respect, it resonates throughout North America, far beyond the careful case study in which it is grounded.

Lauster writes in accessible language following a well-organized game plan anchored in portable theory cutting across a number of social science fields under a broad urban ecological umbrella. However, zoning, governance, and market forces, which are the cornerstones of the first 150 pages, are not exactly enthralling themes for many readers and the book does not really come to life until the second half when his informants tell their personal stories of remaking lifestyles to fit lifeways.

And we are still left with the gut feeling that all those new towers, low-rises, and townhouse complexes are just as atomizing as the neighborhoods of little house boxes they are replacing. Vital communities must be built by the people who inhabit them, not by planners and developers.