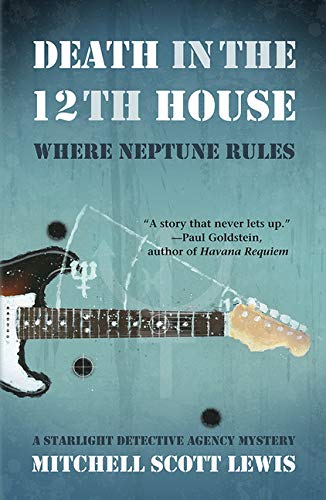 The maxim write what you know certainly applies in this case. The detective in the Starlight Detective Agency series, David Lowell, like the author, is an astrologer. Lowell uses his astrologer’s charts and knowledge to solve the murder of three over-the-hill rock stars who don’t seem to have anything in common besides being dead. One spewed rage, one sang ballads, and one was into heavy metal.

Actually, they do have one thing in common: To varying degrees, they are all rich and famous. The last victim—Freddy Finger—is the richest and most famous and was set to make a lot of money with the release of his new record. He and the band will not only make money on these new songs, but also on the back catalog’s old songs.

Lowell is hired by Vivian Younger, Freddy’s actress/daughter. There’s no shortage of suspects in his murder, because Freddy has managed to annoy everyone who has ever come into contact with him.

He is helped by his staff: Sarah, the young office manager who keeps everything flowing in the physical realm; Mort, the hacker with psychic abilities; and a driver slash bodyguard named Andy.

Lowell uses not only the charts of the victims, but also the charts of the people most intimately connected to them. He thinks that two people in a relationship combine to make a third chart: the relationship chart. And for musicians that clearly includes not only wives and ex-wives (three in Freddy’s case), but band members, managers, and producers. The dynamics of a couple or a group are different from that of the individual. And it is here where he can find the answers.

Lowell recognizes it’s a very Neptunian case all around.

“Neptune is the most confusing and misdirecting of all the planets. It rules alcohol, drugs, music and anything that’s an illusion. It is most prominent in the arts . . . Sixty-year-old musicians that look and act as if they’re twenty. Ex-wives and widows with more hate than love. And friends who aren’t perhaps friends at all.”

The astrology perceptions should be evenly distributed throughout the book, like first layer of frosting that is spread thinly and evenly on a cake to avoid crumbs, thus called the crumb coat. But in this book not only are the astrological insights distributed in dollops, they are saved until late in the story, which has the effect of cheating the reader out of insights that could help solve the case.

And the love affair is forced: The participants seem unlikely, and the 30-year age difference is just plain old creepy.

Any tool that can be used to capture the bad guys can be justified, and astrological insights can clearly be a useful tool. In the next book perhaps they can be used more to help the reader, not just to show off the oh-so-clever detective’s cleverness.