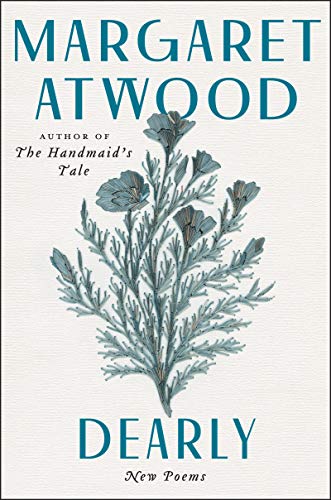 Margaret Atwood is, at this moment in history, probably the most distinguished and most widely admired English-language writer who still hasn’t won the Nobel Prize for literature. During the Trump presidency, Atwood’s classic 1985 novel The Handmaid’s Tale experienced a resurgence in popularity not entirely linked to its television adaptation. Following that wave of interest, Atwood published The Testaments (2019), a sequel of sorts to The Handmaid’s Tale, which was enormously and perhaps undeservedly successful.

Atwood’s new collection of poems, Dearly, is likely to be received with the same disproportionate excitement as The Testaments. Neither book is Atwood’s best work. Both are enormously derivative of the high points of her career, marked by Atwood’s distinctive style and use of language, but offering little or nothing new in terms of insight, and little original content.

Atwood’s poetry has a history of minimalist sharpness. Her four-line “You Fit Into Me” (1971) is a benchmark of linguistic craft and imagery. The poems in Dearly fall short of that mark, and others Atwood herself has set. It’s unclear whether the problem is simply rapidity of writing (that is, they came to press too soon after their creation, without sufficient editing, in order to meet the current Atwood mania), or whether the poems signal a perhaps inevitable decline in the work of now-octogenarian writer.

The collection is dedicated “To Graeme, in absentia.” That epigraph, and the title, both point to the still-relatively recent passing of Atwood’s longtime partner Graeme Gibson (d. September 2019), and to the decline into dementia that preceded his death. There is, in those signals, the potential for a powerful meditation on love and loss in the mode of Joan Didion’s The Year of Magical Thinking (a memoir about the period following the death of her own husband).

The first two poems speak to precisely that. Atwood begins with the acknowledgement, “These are late poems.” All poems, though, she remarks, are too late, “like a letter sent by a sailor / that arrives after he’s drowned.” If not a sailor, then perhaps the poems are “late, as in late for supper: / all the words cold or eaten.” The language, its play is meaning, is vintage Atwood, creating enormous promise. It’s followed by an almost-stereotypically-Atwood piece, “Ghost Cat,” which narrates the descent of one of the family cats into dementia in a mode that echoes the unnamed absent other.

If the book continued in this mode, it would be perhaps whimsical, but when isn’t she whimsical? But the poems don’t follow any kind of narrative. They slide from loss into family memory, and then arrive at the perhaps-inevitable theme of revisited fairy tales. The re-visitation, though, itself has traces of dementia: the subtleties of earlier versions are lost. The purpose has to be shouted, where once it would be left as a puzzle to the reader. “The Tin Woodwoman Gets a Massage” ends unexpectedly bluntly:

I used to want one:

a dainty cushion of red silk

dangling from a blood ribbon

fit for sticking pins in.

But I’ve changed my mind.

It’s a stanza that would be moderately competent from a high school student, but to see it come from the pen of a literary master is a deep disappointment. The poems continue beyond that page, but they don’t markedly improve.

When Atwood’s literary canon is tallied, some of her books from the 1970s and a few from the end of her career will slide out of the official list. They will be footnotes to the oeuvre: these were also written, but they aren’t good. You may study them if you wish, but they’ll induce a kind of existential sadness in their failure to be what the others are, and perhaps they’re best left tucked under the pile, difficult to pick up by accident.