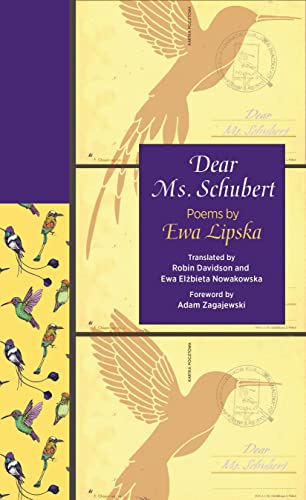 “Dear Ms. Schubert is an admirable addition to international literature, a gift to the English-speaking world . . .”

Ewa Lipska, a Polish poet, has been writing poetry for over five decades in her native tongue. Robin Davidson and Ewa Nowakowska have translated Lipska’s 61 poems gathered from various collections, most poems starting with “Dear Ms. Schubert” (Droga pani Schubert). Inquisitive readers would inevitably learn a few Polish words, as each poem mirrors face to face the Polish original and the English translation. Those who know both languages have a feast at their table.

A friend of Wislawa Szymborska (1923–2012), the recipient of the 1996 Nobel Prize in Literature, Lipska belongs (at least chronologically) to Generation ’68 in Poland, a generation of students, activists, intellectuals, and poets, who in 1968 protested against communism—a year when Martin Luther King and Robert Kennedy were assassinated in the United States amid popular protests for the Civil Rights Movement and against the Vietnam War.

Dear Ms. Schubert contains no tumults, no protests, no history, no sociology, and no anguish against an oppressive sociopolitical system that the Soviet Union had imposed on Poland. The Schubert poems reserve icy indifference to the past. One reason might be that Ms. Schubert begins to appear in Lipska’s poems about six years after the collapse of the Soviet Union in 1991.

Ms. Schubert is an imaginary character, of German vintage, a tip-to-toe petit bourgeoise in her sensibilities, that Lipska first invented in a 1997 collection of poems. Ms. Schubert continues to resurface, sporadically, in poems published in 1999, and 2010. In 1997, she receives the counsel: “If you must sin, dear Ms. Schubert, do it in style.” In 2010, Ms. Schubert is reminded “of the past . . . The penetrating smells of funerals and mints.”

In 2012 and 2013, Lipska published two volumes (consisting of 54 poems) devoted to droga pani Shubert. Now, Ms. Schubert is no longer a marginal character. She is the heart and soul of the poems. She is the poems. The translators, in the Afterword, observe that Ms. Schubert, first coming across as a “conventional, mediocre, and a bit narrow-minded” woman, acquires independence, sophistication, and erudition in later poems.

The evolution of Ms. Schubert as a character, as some readers might expect in a novel, is not central to Lipska’s poetry. “The novel that I could write for you,” dear Ms. Schubert, would be like describing “an abyss in the presence of an attorney.” So, there is no need “to plagiarizing from novels that end up as fabric softener.”

Searching for a thematic evolution of Ms. Schubert might constrict the meaning of poems. Poems are self-determining organisms or aspire to be and so are the characters in the poems. Reading poems as independent variables is almost obligatory to appreciate their spatiotemporal non-confinement.

Despite natural curiosity, it is equally unimportant to know who is addressing Schubert as “Dear Ms. Schubert.” Who is the “I” or “We” in the poems? Mr. Schmetterling (her ex-lover), The Soloist, The Dead. Whoever, “We are all foreigners translated into German.” So, “Dear Ms. Schubert, I send you regards from the Labyrinth.”

All poems dwell on the slippery slopes of connotation, Lipska’s poems even more so.

Fascinatingly, Ms. Schubert says nothing in any of the poems. She exists more like a silent deity in a temple or a worn-out statue at a busy intersection in Krakow, Amsterdam, or Mexico City. The devotees come and go, ask questions, tell stories, recommend a comedy, complain, share dreams, and intimate that “Dear Ms. Schubert, as my life winds down, I hang up the ocean.”

Lipska’s poems resurrect memories with startling metaphors. “Dear Ms. Schubert, in my youth I often fell sick with opera.” Here, cholera and not opera would make a more perfect sense to the amygdala. However, poetry neurotransmitters intertwine unexpected synapses, and only “a concert hall patient” commands the experience to forewarn that “music spreads incurable diseases . . . delusions for strings.”

The Schubert poems are sonnet-like, though delivered in poetic prose. The sonnet, a poetic form that originated in Sicily in the 13th century, spread throughout Europe, including Poland. However, the Schubert poems compose five to seven lines without a meter, the lines do not rhyme, and there is no couplet at the end. Yet each poem carries the fragrance though not the structure of a sonnet.

The poems navigate long stretches, from illusion to “intoxicated sentences,” to “the city of Guadalajara, where the sunset is shorter than a thought.” Reality does not pester Ms. Schubert, as she listens to a devotee saying, “I paint illusion. I’m misled by the eye and the forgery of light.” The love feelings laced in the poems are sensual, enigmatic, and expressive. “Dear Ms. Schubert, the temperature of our love is 2,200 degrees Fahrenheit.” If the earth becomes insufficient, “I promise to find a new planet on which I’ll print your heart.” Ms. Schubert says nothing.

The translators, both poets, have done a superb job in rendering the Schubert poems in English. Only poets can comprehend other poets. The translation is a confidential pact of loyalty between the poets of diverse languages. “Dear Ms. Schubert, I’m writing you in/ Polish. A strange tongue. It sticks to the palate. / It has to be translated, constantly, / into foreign languages.” (Lipska’s poetry has been translated into French, German, Hebrew, and other languages.)

The Schubert poems are filled with music, flowing from “tragic opera,” “nearby opera,” pianos, and pianists. “Dear Ms. Schubert, I am looking for you in a foreign city, where black pianos have taken the place of houses.” However, the love of music overrides the love for musicians, who, like Richard Wagner, craft great music but might harbor racial animus. “I wouldn’t want to meet Richard Wagner in person-/Please, just make me an appointment with his music.”

Dear Ms. Schubert is an admirable addition to international literature, a gift to the English-speaking world, as prestigious publishers develop a multilingual archive for the poets of the world.