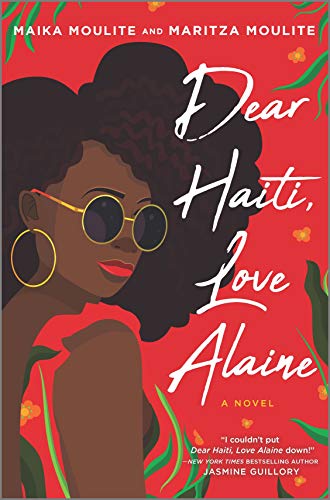 “an engrossing family drama laced with humor, as well as a fascinating window into Haitian life.”

In Alaine Beauparlant, the Moulite sisters have created a smart, sassy heroine that readers are sure to embrace. As the tale unfolds through tweets, emails, TV show transcripts, and journal entries, Alaine emerges as a teen with a strong voice, sharp humor, and a trusting worldview that takes some hard knocks along the way.

Alaine is a first-generation Haitian American who isn’t quite sure where she fits in either culture:

“If I’m being honest, there are times when I don’t feel as Haitian as Tatiana [her best friend]. . . . There are so many times when I’ve felt left out of the Culture, and I think it’s because it’s been me and Dad for most of my life.”

A child of divorce, Alaine lives with her psychologist father in Miami and gets by with brief snippets of her busy mother Celeste, the Washington, DC, host of a Sunday interview show. Her life takes a dramatic turn when two events occur. First, Celeste slaps a sleazy Florida politico she’s interviewing on live TV (hashtag: #SlapGate), and then, after schoolmates mercilessly taunt Alaine because of the incident, her school presentation goes spectacularly wrong.

In the midst of her senior year of high school, Alaine finds herself suspended and shipped off to Haiti for two months. Her assignment: to volunteer for Tati Estelle’s nonprofit app, Patron Pals. Along the way, Alaine learns that her mother’s on-air meltdown was partly due to her early-onset Alzheimer’s disease and partly to the complicated history between her parents, the politician, and Alaine’s aunt Estelle.

The book takes the form of a report Alaine is writing about her Haitian experience for Sister Wagner, the head of her private school. Its teen voice is believable and strong, and Alaine’s attitude shines through, particularly in the crossed-out sections of her journal entries:

“Sister Gayle explained during the Welcome that our placements [for the Career Day assembly] had been selected pre-Career Day to prevent us from talking with our friends and shaming her her in front of the people who pay our tuition ensure that we got the most from the day’s activities.”

And Alaine will need that saving humor, for life in Haiti offers its own challenges. For one thing, her mentally deteriorating mother has taken refuge there, occasionally wandering off as Alzheimer’s sufferers do. For another thing, Tati Estelle shares pages from Celeste’s teenage diary that reveal their family’s dark secrets—among them that the Beauparlants are laboring under a curse that dates back to the days of Haiti’s struggle for independence.

“My family was no different, no matter how highly regarded they were. Politicians, socialites, doctors, lawyers, executives, masked cape crusaders. It was no secret that people envied them because of the status they held, but no one was above the fear of madichon. We were all capable of letting ourselves believe in superstition.”

Not sure she entirely believes in the curse, Alaine nevertheless follows the mystical instructions of Roseline, former servant to the Beauparlant household, hoping to break the curse and cure her mother’s Alzheimer’s. But will the cost of the cure prove too high?

Although the story starts off slowly, it gathers steam as it goes, finally landing with a wallop of an emotional punch. Readers will find it an engrossing family drama laced with humor, as well as a fascinating window into Haitian life.