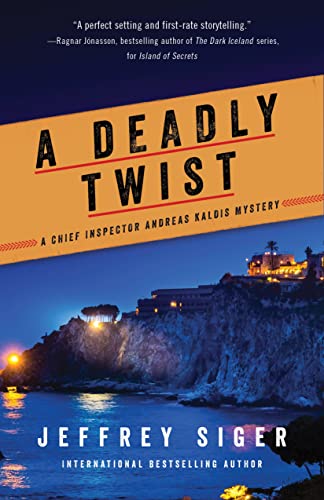 Siger uses the disappearance of a journalist to take us on a pleasant trip to the Greek island of Naxos, the Cycladic island known especially for its Temple of Apollo and the abandoned marble statue of Dionysus.

Busy with other pressing matters, the series’ main character, Chief Inspector Andreas Kaldis, sends Detective Yianni Kouros to Naxos to help with the investigation. Since Nikoletta Etti has posted incendiary material exposing the island’s secrets, she has no doubt been kidnapped by worried parties. Since she was investigating every aspect of the island and interviewing everyone she could corner, she would have created enemies on multiple fronts.

Once on the island, Yianni teams up with the local police. After he accompanies female Officer Popi Sferes to a small village to ask pesky questions about a local with a bad reputation, they’re run off the road and nearly killed. Yiannis is sure the accident was a deliberate attempt to end any attempts to locate sources of the journalist’s abduction. He is especially puzzled since the local Popi was well liked among co-workers, and her family is well respected around the island.

By the time Andreas himself arrives, wife in tow, the investigation has heated up to include many local constituents, including the mayor. The journalist had filled six notebooks on many of the happenings on the island. The police recover five of them, but what was in that last set of notes? They have to keep digging through layers of Naxos’ complicated society to find leads.

They interview the uncooperative mayor but find out even more through local thugs such as Honeyman, who is notorious around the island for selling commercial honey to tourists as if it were home-grown. The locals don’t appreciate his deception, but they uniformly tolerate it.

As the investigation ensues, teamwork among all the investigators as well as their life partners allows the crew to untangle the web of connections. The islanders are fierce and proud. They want to run their island on their own terms. Are they willing to sell their own heritage in order to do so?

While police officers are often depicted as gruff pessimists, our Greek investigators are engaging company. They take their jobs seriously but have broader outlooks on life, so they seem especially well rounded. They commiserate with the islanders even though they have to ask unpleasant questions of them.

The prose is pleasant throughout. Siger easily includes realistic bits and pieces about Greek island life. For example, Nikoletta was successful because she was able to coax material out of the locals. As Yianni says, “She must have a real gift for getting people to talk. I find most villagers to be closemouthed when it comes to speaking to strangers.” The islanders are suspicious of foreigners even though, ironically, the island thrives on tourism.

Siger also includes humor, such as when describing the questionable mayor: “The mayor’s perpetual smile turned sharklike. ‘That’s [false] and you know it. The local cops are inept and couldn’t find a souvlaki at a soccer match.’” Siger makes us chuckle while providing a unique character study.

Other passages give vivid pictures to help us understand the setting: “Dimitri wove through Chora’s maze of one-way streets to a tiny parking area wedged between the edge of a cliff and the hotel.” There are also colorful secondary characters such as Yianni’s American girlfriend Toni. A musician on Mykonos, “[she] rarely stirred before noon, and then it was off to her day job playing finder of stolen goods for tourists and locals preyed upon by opportunistic thieves.”

The novel’s strength is its ode to Naxos. There is quite a lot of detail to the setting. Although the novel explores different aspects of Naxos’ society, it reads somewhat like a travelogue. The characters stop for lunches of local fare, and at one point they even indulge in a swim. Although they’re committed to finding traces of the journalist, the stakes don’t seem high—until Andreas and company stumble upon a commodity more precious than information: antiquities. At that point we learn crucial aspects of the island’s economic system and its flaws.

The pleasant romp makes us want to visit the island as soon as possible. It is not particularly well known to Americans, so U.S. armchair travelers are in for a special treat.

There are a few minor leaps of faith, such as when the nurses on Naxos speak not only fluent but sophisticated English and when Toni acts obnoxiously enough to muscle her way into a Greek hospital, but other details about the island ring true.

Those who have traveled to Naxos will appreciate the chance to revisit the island and reacquaint themselves with some of its special features. The beaches rival the archaeological ruins to offer a top experience. Siger’s novel is an enjoyable first step for appreciating this special foreign locale.