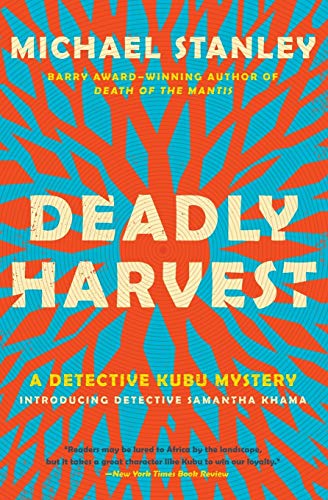 A young girl goes missing after getting into a car with a mysterious man. Then another girl goes missing. The rumor mill is saying the girls are being harvested for muti, a witch doctor’s potion traditionally derived from plants and animals—and which some believe can be made more potent by adding human remains.

Detective David “Kubu” Bengu joins the investigation with the police force's newest detective—and only woman—Samantha Khama, for whom the case is personal. When the local police lose interest in the first disappearance, Samantha devotes herself to keeping the case alive.

Soon afterward one girl’s devastated father, convinced that his daughter’s death is linked to the recent popularity of a political candidate, takes the law into his own hands. After the father flees, what Kubu and Samantha find in the politician's home confirms their worst fears: muti containing human DNA is real.

Now Kubu and Samantha are thrust into a harrowing race to stop a serial killer or killers—and those who would pay for their special, lethal muti.

Detective Kubu is a man filled with not only humanity, but also anxiety; be it for his current caseload of murders and disappearances, or simply trying to keep his wife Joy and daughter Tumi happy. He spins many plates of complexities but always manages to balance them before they manage to drop and smash into many pieces.

Yet for all his optimism about life there is always a brooding expectation of the inevitable waiting to happen.

“It was the Tuesday morning after the four-day Easter holiday. Assistant Superintendent David Kubu Bengu drove to work with a smile on his face and a song in his heart. Actually the song was in his throat—Rossinis largo al factotum from The Barber of Seville. He loved the piece with a passion, often startling other drivers with his slightly off-key, booming rendition. In some ways he saw himself as the factotum of the Criminal Investigation Department.

Just after the Game City mall, Kubu turned right off the Lobatse road into the Millenium Park offices of the CID. Every day that he came to work, he was grateful that the detectives had their offices at the foot of Kgale Hill—a wild enclave with the city lapping around its base, a rocky outcrop of natural bush that offered walks with wonderful views, and provided homes for baboons, small buck and other wildlife.

Not that Kubu had ever been very far along the walks; his bulk and general belief that the best exercise involved lifting something delectable to his mouth rather dampened his enthusiasm for clambering up the hill. Nevertheless, as he squeezed himself out of his old Land Rover in the narrow parking bay, he could enjoy the wildness of the hill above him and hear distant calls from the baboons.

Kubu had spent a quiet weekend with his wife and daughter, and had particularly enjoyed the pleasure three-year-old Tumi had given his parents when they were all together on Easter Sunday. They were besotted by her.

He had barely walked into his office, however, when he realized that the day was not going to be a quiet one. There were already four messages on his desk.

The top one read “The Director wants to see you immediately.” The word immediately was underlined many times. The director’s assistant was not shy about making a point.

The second was from his wife, Joy, reminding him not to forget to pick up Tumi at noon for her doctor's appointment. He felt a twinge of irritation. Stop nagging, he thought. You told me about it as I was walking out the door.

The third message read ‘Detective Khama would like to speak to you.’ Kubu raised an eyebrow. Samantha Khama was new to the Criminal Investigation Department and the only female detective. Kubu had met her briefly when she joined the CID a few weeks earlier, but hadn’t worked with her on any cases. Already the rumor mill was active, with people whispering that she disliked men and was possibly a lesbian. This was a dangerous reputation to have in a country where same-sex relationships were illegal. What did she want? he wondered.

The final message was in his own handwriting—he’d left it for himself on Thursday afternoon, before the long weekend. It had but one word on it Funeral.”

Deadly Harvest is number four in this fascinating crime series. Detective David “Kubu” Bengu is a wonderful creation, complex and beguiling. The exotic smells and sounds of Botswana fill the pages as well as the changes and struggles of a country brimming with modern technology yet fiercely clinging to old traditions. Compelling and deceptively written, it’s the perfect summer read.